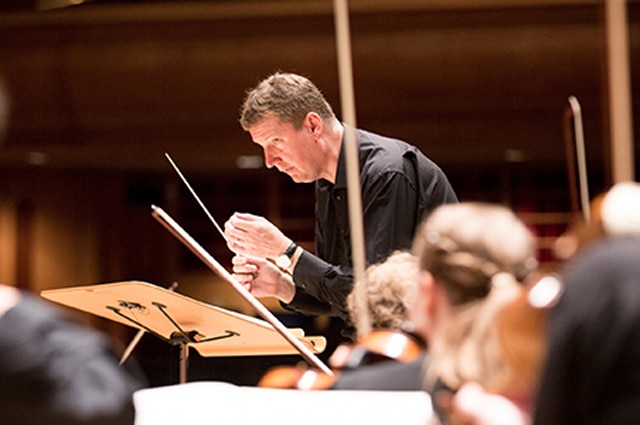 The fact that Haydn’s symphonies were so influential in the subsequent development of the genre can detract from the fact that operas, of which he wrote around fifteen, comprised a not insignificant part of his output for his long-term patrons, the Esterházy family. La canterina (The Songstress or The Diva) of 1766 is the earliest for which a near complete score survives. The entire piece lasts around fifty minutes, with each of the two acts containing a pair of arias and a final quartet.

The libretto was adapted from Niccolò Piccinni’s L’Origille (1760), and the story concerns a confidence trickster named Gasparina who, along with her friend Apollonia who is disguised as her mother, attempts to cheat men out of their wealth and possessions. The two ‘victims’ are their landlord Don Pelagio and one Don Ettore, and the flimsy plot sees each arrive in turn as the women invent excuses to make each man think that the other is not a rival for Gasparina’s affections. Don Pelagio finally discovers the truth and attempts to evict the women from their rooms, but they win him over into letting them stay. When Gasparina subsequently swoons at Don Pelagio’s generosity, both he and Don Ettore discover that the only ‘smelling salts’ that will revive her are gold coins and jewellery, and so they surrender theirs to her. This twist means that what is ultimately a light, frothy comedy could feel just a little sinister, were it not that no-one could ever start to take the story seriously. The men know they are being fleeced, and end up positively delighting in being duped by the miracle of womanhood!

Haydn’s skill in ‘imitating’ the comic operas of the day manifests itself in many ways. Don Pelagio uses the singing lesson that he gives Gasparina to try to collude with her romantically, and even to propose marriage. His aria, with its suggestive text, is also highly amusing because the grand, flamboyant orchestral introduction is then followed by the most short and prosaic of opening lines. Similarly, Gasparina pleads for mercy in an aria in which the minor key, the tremolos in the strings, and the leaps and sighs within the melody all highlight the mock intensity of the occasion. There are also conscious uses of specific instruments that seem only a breath away from ‘Dentro il mio petto’ in Mozart’s La finta giardiniera (1775) in which Don Anchise explicitly proclaims the instruments that then enter. The quartets are also noteworthy for the dynamism that they generate as much as for their musical brilliance.

This performance by Classical Opera, conducted by Ian Page, was highly accomplished and, while it was not staged, the expressions and gestures from the principals were on a par with those that might have been found in a full production. As Gasparina, Susanna Hurrell (replacing Ailish Tynan at relatively short notice) revealed a full and beautiful soprano that exquisitely shaped all of the leaps and sighs and, as Don Pelagio, Robert Murray’s strong yet warm tenor was highly persuasive. As Don Ettore, Kitty Whately revealed a rich mezzo-soprano, while that of Rachel Kelly (playing Apollonia) proved as precise as it was vibrant and engaging.

We may see La canterina as a slight work, but it is performed infrequently today primarily because it is difficult to place, being too insubstantial either for an opera house or a full evening in a concert hall. Classical Opera was therefore very clever in preceding it with a symphony by the same composer and excerpts from another equally obscure opera so that, working to its ‘Mozart 250’ theme, all of the pieces came from the year 1766.

Although little known today, Czech Josef Mysliveček (1737-1781) was one of the few ‘foreign’ composers to enjoy sustained popularity in Italy, and to have been truly admired by Mozart. His Semiramide, like those of Porpora, Jommelli, Hasse and Gluck before him and Salieri and Meyerbeer after, utilised a libretto by Metastasio that had originally been written for a version by Vinci in 1729. It presents a somewhat different story to that to be found in Rossini’s eponymous opera, and the four arias performed from it, with the soloists for La canterina each taking one, took us through the main plot points, as did the clear and informative programme notes.

The story tells of three suitors to Tamiri (a princess from Bactria), and of how one of them (the Indian prince Scitalce) ultimately rejects her because he loves Semiramide, who he had previously tried to murder. The exceptionally skilful music supports the mood and subtexts perfectly so that, for example, G minor is used to portray fury, while the libretto’s frequently watery metaphors (such as stormy seas or small rivers) are appropriately illustrated. The evening began with a performance of Haydn’s Symphony No. 34 in D minor, in which it was both delightful and moving to hear the piece rendered by forces on the same scale as those the composer would have known.

For details of all of the concerts in its 2016/17 season, visit the Classical Opera website.