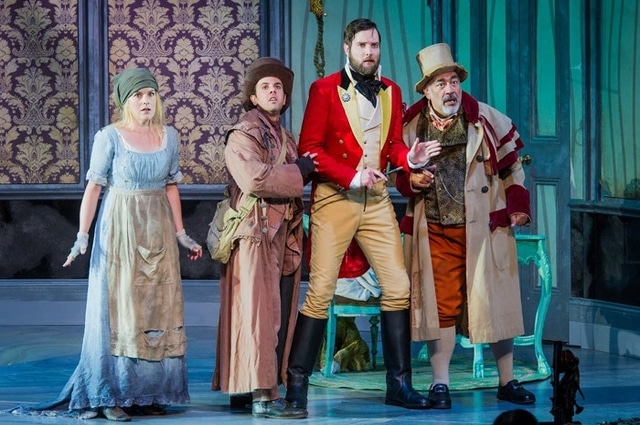 Opera Holland Park has a proud tradition of staging works by Italian composers, whether that be Mascagni rarities, or the creations of such musicians as Montemezzi and Cilea whose own talents were overshadowed by those of Puccini. In recent years, however, it has also focused on Rossini, with one particular director leading the way. Oliver Platt directed Il barbiere di Siviglia in 2014 and now takes on La Cenerentola, and he stands at the head of a team that is developing a distinctive approach to staging the composer’s works. Three of the principals here also had roles in Il barbiere, while a fourth appeared in the most recent revival of Jonathan Miller’s 1987 production for English National Opera.

Platt transferred the setting of Il barbiere to the streets of Victorian London, and in the process made the opera feel just a little grittier than usual. If he does not do anything quite as radical here, the same dynamic approach that made Il barbiere such a success, and which can be attributed to the talents of both Platt and the performers, is very much in evidence.

Neil Irish’s set consists of a simple semi-circular structure, but much cleverness is to be found within its walls. When depicting Don Magnifico’s house three separate sets of wallpaper on the continuous curve mark out the rooms of the man himself and of his daughters, Clorinda and Tisbe. The sisters’ walls sport garish greens and pinks, while Don Magnifico’s have a brown pattern. The fact that the wallpaper looks old and torn suggests the family has seen better times, thus explaining why Don Magnifico is so desperate to marry his daughters for wealth. All the same their surroundings look positively luxurious in comparison with Angelina’s, which are depicted by stoves and brooms lying on mounds of coal at the sides of the stage.

When we enter the Prince’s palace the main structure remains but every panel within its walls flips around to present a more polished surface, although the fact that the decor feels tasteful rather than decadent hints at Ramiro’s own enlightened values. The evening carries an excellent dynamism that generates much humour, but the fact that the amusing antics help to mark out character prevent the evening from coming across as too facile. When Don Magnifico issues his drunken edict the entire male chorus scuttle around the stage trying to pen his incoherent proclamations. While this is hilarious, it is the fact that Don Magnifico wants the edict to be posted all over town that would explain why they are making multiple copies.

The set’s revolving panels can also act as entrances, which at times helps generate a strong ‘in one door, out the other’ dynamic. It also allows a little activity to occur in the background as guests can quietly pass through rooms behind the principals as would happen at a real ball. The numerous exits also ensure that the performance space can move from being packed to empty in a matter of seconds. Emma Brunton’s choreography is highly effective and also helps to support the drama. For example, the mass routine before Angelina arrives at the ball is cleverly planned so that as everyone moves around the stage the principals encounter each other at the right moments to have their various conversations.

There are many brilliant touches relating to props. In Don Magnifico’s house three large bell cords hang down revealing how much he, Clorinda and Tisbe order Angelina around. When everything seems to unravel for them, however, they begin to place these around their necks as if all they want to do is hang themselves. The most visually arresting image of all, however, is of the Prince’s carriage hurtling though the storm. It is human beings who create it with the aid of coal scuttles for the horses’ heads and umbrellas for the carriage wheels, and the combination of their movement, the lighting and the music creates a very powerful scene.

Dane Lam‘s conducting of the City of London Sinfonia is highly effective, while the cast prove excellent at singing, acting and establishing the relationships between characters. With a strong voice and excellent facial expressions Jonathan Veira is a superb Don Magnifico. Having played Dr Bartolo here in 2014, he proves once again what a class act he is at portraying the middle-aged, middle-ranking, pompous buffoon who has known better days financially. Nicholas Lester who played Figaro has a very powerful and persuasive baritone as Dandini, while Nico Darmanin as Prince Ramiro (and Almaviva in 2014) is possessed of an extremely striking tenor. The interaction between the two is also strong as once senses Dandini goes far further in flamboyantly ‘testing’ the sisters than Ramiro would ever have done, because he has got carried away with playing someone other than himself. At the same time one sees Ramiro having to improvise himself as he responds to events that do not unfold quite as he had planned.

Barnaby Rea (who played Don Basilio at the Coliseum last year) proves an excellent singer and actor as Alidoro, while Fleur de Bray and Heather Lowe are magnificent as Clorinda and Tisbe respectively. One sees in them the total opposite to Angelina in that she embraces them at the end, in spite of all they have done, while they never once look happy for each other if it seems that their opposite will win the Prince. At the same time, for all that they are both caricatures of selfishness, we see some variation in character as at the end Clorinda seems just a little bit more prepared to show humility and happiness for Angelina than Tisbe. Finally, there is the excellent performance of Victoria Simmonds as Angelina who reveals the most rich and feeling mezzo-soprano, and who soars to the top of her register with equal assurance and beauty.