by Melanie Eskenazi
published: 20 May 2019 in Opera and Classical Reviews
Tweet 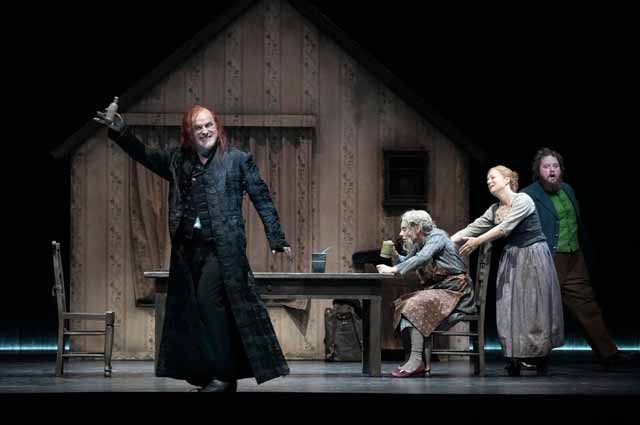 Glorious sunshine in the incomparable gardens, excellent food and company, and a stunning fireworks display to bring the evening to a close, marking the 25th year of the new theatre. What more could you want? Well, maybe a production of Berlioz’ ‘Légende dramatique’ which conveys a bit more about the human condition than may be given by an over-supply of devil-lets and a concept of Faust not as a Romantic seeker of all the knowledge in the world but as a bit of a bumbling loser. Oh, how that first half dragged on – never did a picnic look more welcome.

Musically, there was much to savour. Robin Ticciati is well known for his great love of Berlioz, and he conducted the London Philharmonic Orchestra with sensitivity, his affection for the score evident in every bar. The LPO responded with playing of elegance and dramatic force, with some truly outstanding performances by individual sections, most notably from the harps. Perhaps the orchestral sound was not as overwhelming as some might prefer, but it brought out the light and shade in the score.

The stand-out performance came from the Méphistophélès of Christopher Purves, a house favourite and most warmly remembered for his superlative Saul in the 2015 production of Handel’s oratorio. The production begins, not with Faust extolling the delights of solitude in nature, but with Purves reciting extracts from Goethe’s Faust, translated into French – this firmly establishes the character as the driving force of the plot, and places a huge burden upon the singer. Purves declaimed the lines magnificently, recovering elegantly from an early memory lapse, and he sang with ferocious intensity throughout – you really wanted the production to end with ‘Je suis vainqueur!’ 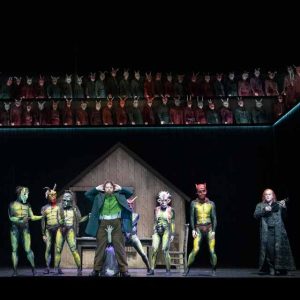 Successful as that alteration was, the rest was more dubious. Everyone loves Allan Clayton, so it was easy to sympathize with his vacillating, lumbering Faust, but this concept barely suggested the character’s Romantic longings. He sang with his customary commitment and sweetness, although he found ‘Nature immense’ rather challenging. Julie Boulianne, making her Glyndebourne debut, has a delicate voice which sometimes needed more emphasis in the phrasing, although ‘D’amour l’ardente flamme’ was finely sung. Ashley Riches was a suitably swaggering Brander.

The huge chorus had been impressively trained by Aidan Oliver, and its members entered with enthusiasm into their characterizations of lines of threatening devils, looking down on the actions below as if a band of medical students witnessing an operation. Their singing was magnificent throughout.

Richard Jones’ production employed the expected ample spaces, sparse design (Hyemi Shin) and anti-naturalistic style, allowing Nicky Gillibrand’s traditional costumes to stand in for historical perspective. Andreas Fuchs’ lighting successfully conveyed both the crepuscular atmosphere of Faust’s study and the glow of his happy memories, which was just as well as there was precious little else to characterize these aspects.

If it’s possible to suggest a vague nihilism, that is what came across in this production, with the feeling that nothing is really sincere apart from ultimately doomed love. Oh those poor drugged-up girls, and the bell-boy like cadets zooming about, and the embarrassing dance routines. Fair enough, much of this stuff is in the libretto. When the regrettable ‘Walpurgisnacht’ did not occur in the expected place, some of us assumed that it had been mercifully cut. But it was not to be.

One does not need picture-book verisimilitude for this sort of piece, but stark ‘realism’ without much intellectual depth is equally unwelcome. There’s plenty of cinematic reference to spot, if you like that kind of thing, but it’s the singing that makes it worthwhile.