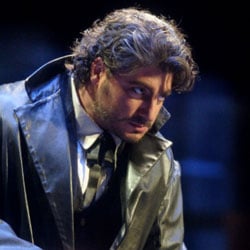 An aging production of La fanciulla del West proved an unexpected hit during Royal Opera’s 2005 season. So much so that it has returned for another revival. Dating from 1977, Piero Faggioni’s interpretation of Puccini’s fin de siécle Gold Rush drama is surely one of the oldest productions on the circuit, and certainly one of the last to wow with realism. Its obsessive detail and honesty might feel pass but is really the only sensible approach for this satisfying but sturdy opera.

La fanciulla, premiered in New York in 1910, may not have the hits of Bohème or Butterfly but is, on its own terms, equally moving. Whilst carrying all the Puccini hallmarks, with the mere hint of Straussian dissonance, the score is rich with American influence: cakewalk rhythms, snares and fanfares, and quasi-cinematic gestures of sweeping romance and heartbeat suspense that seem to foreshadow the Spaghetti Western.

Puccini may have been a rampant womaniser but there’s no shortage of feisty, independent females in his operatic oeuvre. Here the eponymous heroine is Minnie, a bar girl whose life has been so preoccupied by guns and God (Sarah Palin’s kinda girl) that she hasn’t felt true love until Dick Johnson, a glamorous undercover bandit, swings into town. Based on David Belasco’s 1907 play of the same name, the story is unusual for Puccini in that no one meets a grizzly end.

It was José Cura who hogged the publicity (his performance back in 2005 was much celebrated) and he didn’t disappoint. Visually Cura is perfect for the part: handsome, charismatic, a little rough around the edges and his voice, too, lives up to the hype; the showcase ‘Ch’ella mi creda’ aria could have been a touch more lingering, but elsewhere he was close to perfection. The first night, however, belonged to Eva-Maria Westbroek, the exciting young Dutch soprano whose large voiced and steely toned Minnie provoked a rapturous response from the audience. There was also much to enjoy in the supporting cast: Vuyani Mlinde was impressive in Jake Wallace’s hymnic opener and Silvano Carroli made an authoritative Sheriff Jack Rance.

The intricate sets, designed by the James Bond designer Kenneth Adam, provide an authentic Californian context, and the lighting (Faggioni) is effective: warm glows of fireplaces contrasting nicely with the eerie blue light of snow storm and smoke-haze. There’s the odd clumsy motif, such as the spontaneous door banging that heralds Dick and Minnie’s climactic kiss, but otherwise the direction is impressive. A drawback for some is its length; the two half hour intervals between each act, presumably to allow for the hulking of the great sets, if not building log cabins from scratch, makes for a long old night.

Antonio Pappano conducted noisily and speedily, sometimes at the expense of subtlety, but dynamism is what this opera needs; La fanciulla could lag without some punch in the pit.