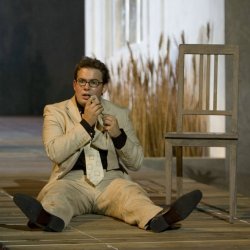 The 250th anniversary of Mozart’s birthday has reaped far too many duds so far – notably the Barbican’s concert performances of Il re pastore, Zaide and Ascanio in Alba. But the Royal Opera’s first-ever production of La finta giardiniera sheds such positive light on this obscure work as to suggest it may be worthy of entry into the regular repertoire. I would certainly pay to see this elegant production again, and the score’s beauties are in such abundance as to make the opera worth a second hearing.

Operatic genres were vaguer in the eighteenth century than we like to think, and although the programme of La finta calls it an ‘opera buffa’, in truth it’s closer to the generic mixture of light and dark known as ‘dramma giocoso’. In this, it’s a worthy precursor to the mature masterpiece Don Giovanni. It certainly has some music that’s almost as good, especially the finales, and the comic situations often have a savagery about them that points towards the composer’s well-loved final seven operas.

The story, it has to be admitted, is rather convoluted, but the cast of characters is vivid. There’s the mayor, Don Anchise, who’s a total idiot but very sweet with it; Sandrina, his gardener with whom he’s in love but who turns out to be a Marchioness in disguise; Count Belfiore, who left her for dead; Don Anchise’s niece, Arminda, who has come to marry Belfiore having jilted her lover Ramiro, who also turns up on the scene; Anchise’s servant Serpetta, who hopes to marry her employer; and Roberto, Sandrina’s servant, who is disguised as Nardo and loves Serpetta. The conflicts that are inherent in these relationships provide just the kind of heartache and emotional violence that would pervade Così fan tutte years later – and like that work, it’s veiled by an apparent flippancy and jollity, which makes the pill easier to swallow.

It was a shame that for her Royal Opera debut, Genia Kühmeier as Sandrina made some severe mistakes in the taxing coloratura of her first-act aria, because she was secure elsewhere and her creamy tone is ideal for Mozart.

Her chemistry with former Young Artist Robert Murray‘s Belfiore was palpable. It’s been a great week for the Young Artists, with Marina Poplavskaya wowing the crowds in La Juive and Liora Grodnikaite taking over with panache from an ailing Christine Rice in Faust. Now it’s Murrary’s turn, taking over from Christoph Strehl in the role only a few weeks ago and putting in a vivid portrayal of the fickle Count. Vocally, he’s also impressive, with a nicely tailored legato.

For me, one of the evening’s highlights was the duet between two tenors – Belfiore and Don Anchise, the latter played by American tenor Kurt Streit. This was a musically strong performance – the only problem was that the role isn’t nearly big enough for Streit’s considerable talents as actor and singer! One of my favourite sopranos, Camilla Tilling, once more electrified with her security in the upper register, her clean lines and the beauty of her voice, but what surprised was her convincing physical transformation into the raunchy Arminda. Christopher Maltman gave his most compelling performance to date as Roberto, and Patrizia Biccirè completed a strong cast as the wilful and manipulative Serpetta.

John Eliot Gardiner drove the music a bit too hard in Act I, but things calmed down thereafter and there was both life and love in his interpretation. His English Baroque Soloists have been imported specially for the production and we gain from the bite and raw edge that their period performance practice brings, even if the odd dropped horn note is rather distracting at times.

There are only six performances left to experience this neglected piece – don’t miss out.