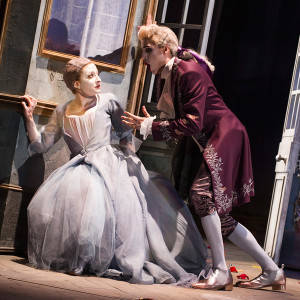 From Feste in Twelfth Night to Piper and her fellow inmates in Orange is the new Black, characters constantly explore the question – What is Love? Mozart’s ninth opera, written at 18, is about seven characters all striving to discover the answer. Finta is also the ninth, and earliest, addition to Glyndebourne’s Mozart canon, and a part of its fascination is the foretastes it gives of Così and Figaro. If you haven’t seen it before, this production is the perfect first one, as it’s stylishly set and superbly sung, and despite a few longueurs it will send you home in a very happy state, reminded once more that, as Salieri says in Amadeus, “The disguises of opera had been invented for Mozart.”

Most productions of this work focus on the ‘giardiniera’ aspect, with at least a nod in the direction of some kind of horticultural setting, but Frederic Wake-Walker has opted instead for concentrating on the ‘finta’ of the title, exploring the artifice and confusion of those who only become true to themselves after a period of suffering and, in some cases, loss of sanity. Antony McDonald’s set is the delicate, shabby-chic rococo drawing room of what the director describes as a “Lustschloss, or folie, a place where people can behave differently, away from society and politics, where people can come out of themselves and go crazy.” – as indeed they do. We won’t spoil it for you by disclosing what happens to this crumbling, fragile edifice, but suffice to say that in the second act, you do become more aware of nature around the characters – albeit more of a sylvan grove than anything you might see at your local garden centre.

Glyndebourne has cast from strength, with a mixture of the known and loved and the new and promising: the former group is represented by Wolfgang Ablinger-Sperrhacke’s wacky yet endearing Don Anchise, Christiane Karg’s sympathetic Sandrina and Joélle Harvey’s feisty Serpetta. The rest of the cast is all debutant here: the star is Joel Prieto‘s languid Belfiore, but he’s given a run for his money by Rachel Frenkel’s love-lorn Ramiro, Nicole Heaston’s bubbly Arminda and Gyula Orendt’s genuinely funny Nardo.

Gyula was able to sing only his recitatives owing to a throat infection, but he made the most of them; his arias were sung from the side of the Circle by Gavan Ring, and it was to the immense credit of both singers that this did not remotely detract from the performance. Gavan won 2nd prize at last year’s Wigmore Song Competition, and his beautifully burnished, characterful baritone made you hear Figaro in Nardo’s arias at almost every phrase.

If that was the standard of the stand-in, how high was the rest? High indeed – the three sopranos were all voices in which it was easy to hear Susanna, Anna or the Countess as appropriate, and as you listened to Joel Prieto’s arias you found yourself wanting to hear his Ferrando and Tamino. Rachel Frenkel’s warm-toned mezzo and confident presence showed why her Cherubino is already much praised, and Ablinger-Sperrhacke, as he always does, demonstrated what a ‘character-tenor’ should sound like.

The Orchestra of the Age of Enlightenment played brilliantly for Robin Ticciati, with everything that we mean when we say “Mozart” – elegance, lightness, bittersweet tension – simply fizzing up from the pit. From this and the Rosenkavalier it’s obvious that Glyndebourne made an inspired choice in its new MD. Witty, lively continuo was provided by Andrew Smith and Luise Buchberger, with fine harpsichord contributions from Matthew Fletcher.

Finta is perhaps more akin to a Handel opera than most other late 18th century works, in that the characters tend to express crises in an aria, and then move on. In this production, those crises are often given additional drama by the character taking off some of his or her clothes – the sort of thing which in some contexts does little for either music or drama, but in this case seems poignantly appropriate, since stripping away what King Lear calls “lendings” is what the piece is all about. However, this is a ‘Dramma giocoso’ so the unveilings and ‘mad scenes’ lead inevitably to a blissful conclusion.

Our interview with Joel Prieto can be found here.