by Dominic McHugh
published: 1 May 2006 in Opera and Classical Reviews
Tweet 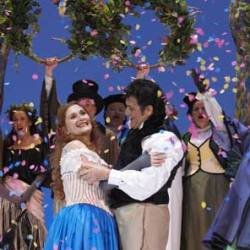 Despite being a product of his maturity – it was written years after his most popular three operas – Puccini’s La rondine (The Swallow) continues to be marginalised, and it is by far his most underrated opera.

This strongly cast revival by the ever-enterprising Opera North reminds us just how wrong the opera’s early critics were, thanks to spirited conducting and well-focused direction.

Whereas the latter (which opened at Covent Garden last night) was frequently static, Zambello’s version of the Puccini is detailed and often extremely moving.

For many years, La rondine was dismissed as ‘Puccini’s operetta’, most unjustly so. Puccini was a huge fan of Lehr, it is true, and originally he was commissioned to write songs or arias for an operetta for performance in Vienna. Yet after grappling with the libretto for some time, he realised that the subject matter was more suitable for an opera. Aspects of the work retain a parody of Viennese operetta, such as the mistress and maid swapping costumes and meeting at the same party. But the score has such substance, and the orchestration is so imaginative, that it far exceeds anything by Johann Strauss II or Lehr. And the characters are far more vividly portrayed in the music of Puccini than any of the creations of the latter composers.

After a slightly slow start, Opera North’s performance did great justice to the piece. Music Director Richard Farnes has worked wonders with his orchestra, who conjured up the exotic Parisian setting of Act I rather more effectively than Bruno Schwengl‘s somewhat black designs for the opening scene. However, something of the Impressionists’ atmosphere was captured by the vivid design for the second act. And the final act was marvellously restrained, cleverly dominated by a beheaded statue, representing the heroine’s inevitable downfall as the titular swallow, who has to fly away from love.

Much of the singing was exceptional, but what really came across was a dedication to the project. All the principals threw themselves into character with total passion, and the final act was tear-jerking.

The courtesan Magda, who falls hopelessly in love in the manner of Violetta in Verdi’s La traviata, was played by Janis Kelly. After struggling with the gruelling ‘Doretta’s Aria’ that challenges all sopranos in the opening minutes of the opera, Kelly relaxed, and by the atmospheric second act she was singing with a gloriously full tone and tastefully controlled portamento. This was a heartfelt characterisation, reminiscent of her memorable portrayals of both Violetta and the Marchallin (in Strauss’ Der Rosenkavlier, from which Puccini took inspiration); one simply could not take one’s eyes off her.

Kelly may not be the perfect physical match for Mexican tenor Rafael Rojas, who plays her lover Ruggero Lastouc, but there was genuine chemistry between them and their duets were sympathetic and rather touching. Here’s a meaty tenor voice, and one to watch: he has an Italianate tone and a very giving approach to singing.

The secondary lovers were no less impressive, which is partly why the performance became more and more engrossing. As the maid Lisette, Gail Pearson demonstrated both a feisty personality and a beautifully clear voice, with elegant and precise phrasing that must be ideal for Mozart. I’m familiar with Alan Oke‘s lyric tenor from Holland Park’s production of Luisa Miller a couple of years ago. He was the first singer to inject energy in the performance tonight, a vibrant Prunier who both sang and acted strongly from the start.

The only weak link was Jonathan Best as an underpowered Rambaldo, but Anna Brittain, Hazel Croft and Victoria Sharp all excelled in the opening scene.

The performance is repeated at the Lowry Theatre on Thursday, and there are further performances in Hull, Newcastle, Sheffield and Aberdeen in the next few weeks. Puccini fans will be delighted for this rare opportunity to hear an overlooked score performed with passion and poignancy.