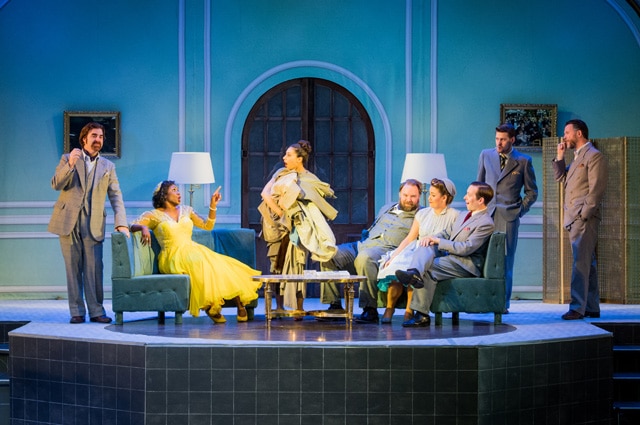 Puccini’s La rondine is rather more emotion than action driven. The Brief Encounter-esque plot, in which Magda, the mistress of the banker Rambaldo Fernandez, momentarily surrenders to insouciant abandon before forsaking her true love, Ruggero Lastouc, and returning to the fold, demands mood swings that stretch credulity, and rakes over certain emotions almost to breaking point.

It consequently requires performers who are engaging enough to take us on every step of their psychological journeys, and that is exactly what Opera Holland Park’s opener to its 2017 season provides. Director Martin Lloyd-Evans also proves, however, just how important the production itself can be in sustaining our interest by constantly turning the emotional colour wheel. Takis’ sets are cleverly constructed so that they help to take us on a journey. Each works around a framework of arches, and yet each has a very different feel. With the transition to each new set involving the peeling back of layers, so that they become increasingly transparent, the commentary is clear enough.

La rondine is originally set in the middle of the nineteenth century but many directors choose a slightly later time period in order to exploit the possibilities of Art Nouveau in the designs. In this instance, however, it is Impressionist paintings on the walls of Magda’s tasteful green salon in Act I that give the time period away. However, when Magda goes out to Bullier’s she puts on modern clothes, which suggests she is undergoing a transformation that goes far beyond merely adopting a disguise. It is as if Magda is trying to put herself in a time when her actions might be deemed acceptable, and would allow her love with Ruggero to succeed.

The set is transformed from the salon of Act I into Bullier’s in a single dramatic instant. Green gives way to red as the dominant colour and the costumes here range from simple outfits from the start of the twentieth century to jeans and leather jackets. It is a visual illustration of how Bullier’s enables people to leave their normal lives outside. The era of each person’s outfit could signify the extent to which they desire to escape their current reality, with the more modern dresses indicating the greater distance that the individual wishes to travel. 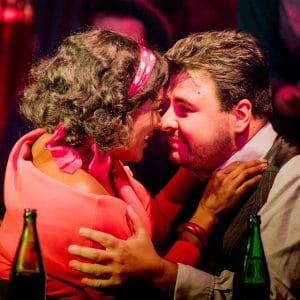 Act II is by and large managed well as it clearly delineates the emotional journeys that Magda and Ruggero go on over the course of the evening. Particularly effective is the sweet way in which the pair reveal their awkwardness when circumstances throw them together at the same table. The chorus members really look as if they are enjoying themselves as they dance, which also helps to generate the right atmosphere. In Act III Magda and Ruggero’s abode on the Côte d’Azur is set around a swimming pool. When we see, however, that the pool still contains leaves rather than water, and that the reclining chairs have a habit of collapsing, we appreciate that the pair are still working towards achieving paradise (which won’t ultimately be realised) rather than actually being in it.

Although every set is, for all intents and purposes, symmetrical, the addition of an extra arch on one side only makes each appear anything but. It also ensures that the sets do not extend to every edge of the stage, which might make them feel too heavy and overwhelming. The raised podium-like area in the centre of the first two sets draws the eye in, and in Act I enables Magda and Ruggero to sing key arias virtually free from distraction. As they do so the direction is unobtrusive as the other characters gaze on, and enables the arias to speak for themselves by allowing the performers to focus simply on thinking and feeling them.

On the other hand, moments towards the end of Act II, including the turn of the Voice of the Dawn (splendidly sung by Alys Roberts), feel too obviously directed when we only need to feel the beauty of the music to grasp the sub-texts for ourselves. There are, however, many subtle touches throughout the evening. For example, Magda’s friends tell her how lucky she is to have Rambaldo as they gaze on her expensive necklace, but when she plans to go out to Bullier’s she destroys this symbol of her ‘captivity’, watching it disintegrate into nothing as the pearls fall one by one from the broken string.

Matthew Kofi Waldren’s conducting is excellent, while from among the strong supporting cast Tereza Gevorgyan as Lisette stands out. It is, however, Elizabeth Llewellyn as Magda and Matteo Lippi as Ruggero who make the evening special. Llewellyn has the precision and focus to make her vocal line feel sweet and clean, but her soprano is also blessed with richness and strength that gives both her sound and the character a good deal of weight. From the moment Lippi enters he comes across as a deep and sensitive soul who contrasts markedly with the more ‘conventional’ men who surround him, and his strong, expansive voice has a beautiful ringing quality. When handled badly the second half of Act III can drag mercilessly, but the fact that here it flies by in no time at all says everything we need to know about just how engaging these two performances really are.