A contender for the most beautiful summer opera venue in the country just got more beautiful! 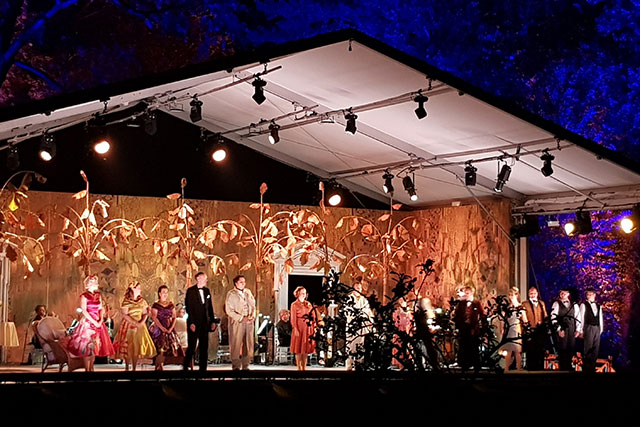 Every summer opera venue has had to contend with the problems posed by COVID-19 restrictions, but none surely has come up with such an ingenious, not to mention stunningly attractive, solution as that devised by West Green House Opera.

The festival is built around gardens that can be visited in their own right for most of the year. This has always meant that there are beautiful surroundings to explore on a visit to the opera, especially when the gardens are illuminated at night so that emerging from the theatre becomes a magical experience in its own right. This year, however, all of the elements that make the venue so special seem to have been combined in one place. Performances are taking place on a stage, designed by Neil Daykin, that is built out from the small island that occupies the centre of the lake. The lakeside where people normally picnic now doubles as the auditorium with all audience members occupying one of four socially distanced marquees that remain open on one side. As a result, the illuminated trees that can normally only be appreciated after the performance now form a backdrop to the action when it gets dark, so that, with the occasional fish jumping in the lake and duck flying overhead, it is hard to picture the surroundings being any more idyllic.

La rondine is the first of the two main opera productions in the 2021 season, and director Richard Studer’s set is designed to act as a suitable backdrop for Eugene Onegin and all of the other performances taking place over the festival as well. The back wall features an intricate, golden Klimt-like pattern, and La rondine is suited by the Art Nouveau style, even though its original mid-nineteenth century setting actually precedes it. Beyond this, little occupies the stage other than some freestanding gold trees and a few chairs and tables. While, however, such simplicity may have been necessitated by circumstances, it proves to be the making of the production.

The splendid West Green House Orchestra, conducted by Jonathan Lyness, plays a reduced orchestration by Tony Burke, and occupies a significant corner of the stage. In this way, there is absolutely no physical barrier between ‘pit’ and performance area, which makes the music making feel like an integral part of the scenario. This very much comes into its own in Act II, since dancing is a key component of the scene, but few occasions in the story are untouched by music so that in Act I the presence of the orchestra feels like a natural extension to Prunier sitting at the piano to sing his song about Doretta.

Bullier’s in Act II is created merely with the addition of high tables with white cloths. This simple but effective touch not only suggests decadence, but proves a strong device for creating a sense of depth. The stage lies at a reasonable distance from the audience which could risk flattening everything from their perspective, but because we see people move and dance in front of, between and behind the tables we gain a keen sense of three-dimensional space. It might seem as if La rondine would need a large chorus to generate the requisite heady atmosphere at Bullier’s, and yet this production does exactly that even though the ‘chorus’ essentially comprises no more than anyone who already has a specific role in the opera. In fact, so well is this scene executed that we soon forget we are watching a staged piece of drama, and simply feel as if we are experiencing our own evening in Bullier’s with all of the highs and lows that come with it.

If we are not engaged with the characters of Magda and Ruggero, Act III can drag mercilessly as emotions feel as if they are being raked over to breaking point. Such is the success of this presentation, however, that we are left feeling that the scene could actually have gone on for longer. This may be in part down to the level of restraint that is shown so that for some of what might be deemed the most emotional moments Magda and Ruggero remain sitting in separate chairs. Such control has enormous benefits in that it stops the drama from peaking too early, thus ensuring it can be sustained, and makes the scenario extremely believable. As a result, we become immersed in it because we can genuinely relate to the protagonists’ emotions, rather than feeling like detached observers of a melodramatic and overblown situation.

Galina Averina, who played Adele here in 2019 and Oscar (Un ballo in maschera) in 2017, is a first class Magda, with the underlying beauty to her soprano being complemented by real strength, edge and nuance. Robyn Lyn Evans reveals a brilliantly smooth and light sound as Ruggero, while Lorena Paz Nieto is a highly accomplished Lisette, bringing a lightness of touch to lines that are always phrased to perfection. William Morgan, who recently played Ferrando in Longborough Festival Opera’s Così fan tutte, brings genuine presence to the role of Prunier as does Philip Smith to the part of Rambaldo. La rondine is an opera that can make for either the most dull or emotive experience depending on how we are left to feel about the characters in question. This cast and production make us care a great deal, with the consequence that we undergo a deeply moving experience.