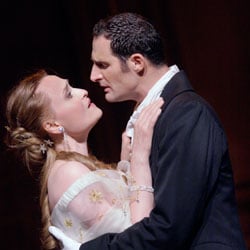 After an unpredictably drab first act, the Royal Opera’s outing of La Traviata on Monday evening inexplicably transformed into a gripping and brilliant piece of theatre. Anna Netrebko and Jonas Kaufmann are a physically beautiful and musically sensational pairing as Violetta and Alfredo. Their increasingly intense and passionate relationship provided the focus to the first night of this gripping revival.

But first things first. Act One – probably the most theatrically effective single act in all opera – never truly shone. Some blame must lie with Richard Eyre‘s otherwise magnificent production, for the set here is elegant but too condensed, even claustrophobic, giving not enough of an impression of the grand party that is taking place. Verdi’s mature works famously balance, for want of better words, the happy and the sad, and here, that the party’s opulence is constricted undermines the sense of tragic loneliness that should pervade Violetta’s climactic scena. The ironic contrast is lost, and thus so is much of the drama.

Musically too, there were problems here on opening night. Maurizio Benini conducted with alertness, but could overdose on pace in the choruses and ensembles, leaving both voice and orchestra gasping, performers having to battle to stay in time. The high strings had their moments of poor intonation also, most problematically in the Prelude. Netrebko, as Violetta, was theatrically gripping, and it was superficially pleasurable to wallow in the sheer opulence of her sound. However, her expressive vocal delivery too often strayed from Verdi’s clear rhythms, vital to bring out. In the glorious love duet, the tempo had to be noticeably and distractingly manipulated to accommodate the soprano’s coloratura. Kaufmann was excellent with regard to rhythm, but he could be underpowered, the usually startling tenor entry in Violetta’s cabaletta here barely registering. The act entertained, but it gave little indication of how engrossing the evening would later become.

And engrossing it was. Eyre’s production, though unashamedly traditional, becomes increasingly brilliant as it progresses, the staging of Act Two’s second scene colourful and intoxicating in its grandeur and muscularity, that of Act Three stupendous, with ghostly silhouettes and surreal visions effectively evoking Violetta’s mental confusion, and increasingly garish lighting intentionally counterpointing the dark approach to the heroine’s death. This is a favourite production at the Royal Opera House, and it still thrills, fourteen years after its premiere. To match, Benini’s conducting became gradually more secure: more idiomatic and increasingly sensitive.

Perhaps the one exception to the rule – and it is a great exception admittedly – was the rendition of Act Two scene two’s concertante finale. Previously in this pithy scene, Benini’s breathlessly fast tempi had provided all the orchestral danger and momentum needed, but I now wished for a more modest and lyrical approach: the sound presented was overcooked and empty. Nevertheless, it was all passionately played. The staging and conducting provided a strong platform from which character drama could emerge.

And Netrebko was exceptional. Here is a true singing actress, blessed with a gloriously rich, luxurious soprano, and also with completely convincing dramatic powers. Her Violetta approached death in the most convincing and captivating manner, spluttering, flailing and collapsing, every move truthful and fully integrated into the committed characterisation. And her voice, if it had seemed out of place in Act One’s coloratura, bloomed in the lyrical piano lines of Act Two and harrowed in Act Three.

Kaufmann was scarcely less good. Not as secure as he was in last year’s Carmen, he nevertheless characterised superbly in the potentially unrewarding role of Alfredo, and sang increasingly ardently, his golden tone in the opera’s final ensemble particularly of note. The only real problem was his singing of the Act Two cabaletta, in which projection was poor and the interpolated top note was terribly, unhealthily strained. Otherwise, this was a fine vocal and physical performance from the handsome tenor, and I look forward to seeing his Cavaradossi later in the season.

Dmitri Hvorostovsky completed the central trio, instilling the elder Germont with authority, as well as vocal dignity, some slight hoarseness in the famous aria notwithstanding. The comprimarios, if none of them brilliantly sung, did not distract from the thrust of the narrative. It was Netrebko’s and Kaufmann’s night, and a complete standing ovation from the Stalls at the opera’s conclusion said a lot about how affecting an evening’s entertainment this had initially threatened not to be, and then wonderfully turned out to be.