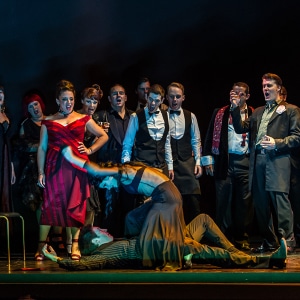 Tom Cairns’ Glyndebourne Touring Opera version of La traviata, which follows on from this year’s Festival production, is simply yet effectively staged. Hildegard Bechtler’s sets have a certain Art Deco feel, but we are actually looking at a present day that embraces earlier fashions. This seems particularly appropriate when the opera is presented in Woking as the décor and atmosphere seem similar to that of the New Victoria Theatre’s foyer, with its graceful spiral staircases and piano bar.

Crystal chandeliers hang above curved and flat planes, and yet the defining feature of the production is the use of colour. Reds and greens vie with monochrome shades, with the balance between the two elements altering in each scene. The parties are the most colourful, while Act III sees the black, white and grey hues broken up only by the red coat that Violetta attempts to don. Earlier on her pale purple and white dress has a monochrome feel, yet still contrasts with Annina’s stark black and white maid’s outfit.

The ball scenes are lively and feature costumes that cover a range of twentieth century styles. By suggesting that each guest embraces the classic style that suits them best, we feel as if we are looking at individuals who each have their own distinctive character and tastes. The atmosphere generated in these scenes is strong, and when the curtain rises on Flora’s Act II soirée and we hear the latest about Violetta, it really feels as if parties have gone on every night with rumours about her circulating at each one. A bed stands on the stage even during the balls, and the evening begins with Violetta lying upon it. This fits with the plot as she is ill from the start, but also acts as a memento mori that alludes to her final fate, as does the Prelude that this action accompanies.

The standout performance comes from Natasha Jouhl as Violetta, who with the quality of her singing and acting very nearly blasts everyone else off the stage. With infinite presence, she captures Violetta’s vivacious appetite for life alongside her frailty, her need to be loved and own big heart. Her sumptuous yet sensitive voice executes the vocal acrobatics required by the role with a glistening yet brilliantly controlled vibrato, and her performance of ‘Addio, del passato’ is particularly affecting.

As Alfredo, Emanuele D’Aguanno feels a little lacklustre in comparison, and the chemistry between the pair is consequently not as strong as itmight be. He delivers a strong ‘De’ miei bollenti spiriti / Il giovanile ardore’, but whenever he has less opportunity to focus solely upon presenting soaring lyrical lines the sound suffers a little. Even the act of tucking his shirt in his trousers at one point forces his concentration away from his voice, which momentarily loses clarity.

Far stronger is the interaction between Violetta and Germont, and if Evez Abdulla still feels just a little wooden in Jouhl’s presence, his remains an engaging performance. With his thick baritone voice, this Germont feels almost apologetic from the start. Equally, however, by Abdulla accentuating those moments when the character does assert himself with a sense of expectancy, we see a multi-faceted and complex being whose emotions are pulled in so many different directions.

David Akfham conducts the Glyndebourne Tour Orchestra at a sprightly pace. This is fine from a musical perspective, and the resulting clean, light sound is radiantly beautiful. Such a consistently unrelenting pace, however, does seem to put the singers under pressure. They certainly respond well to the challenge, but there is a sense in which ‘Libiamo ne’ lieti calici’ only just stays together, and it is only really after the interval that any sense of strain seems to disappear.

The ending to the final scene proves suitably emotive. To suddenly pull the sets from the stage and see Violetta die alone against a silken blue curtain could feel jarring in some contexts, but by focusing our mind on the two elements in this production that work so well, namely the staging and Jouhl’s performance, it generates a moment that is as beautiful as it is heart-wrenching.

Three Glyndebourne on Tour productions (La finta giardiniera, La traviata and The Turn of the Screw) appear in Woking between 28 October and 1 November. After this they will continue to tour to various venues across the United Kingdom and Ireland until 10 December. For full details of dates, venues and variations to the cast described above visit the Glyndebourne website.