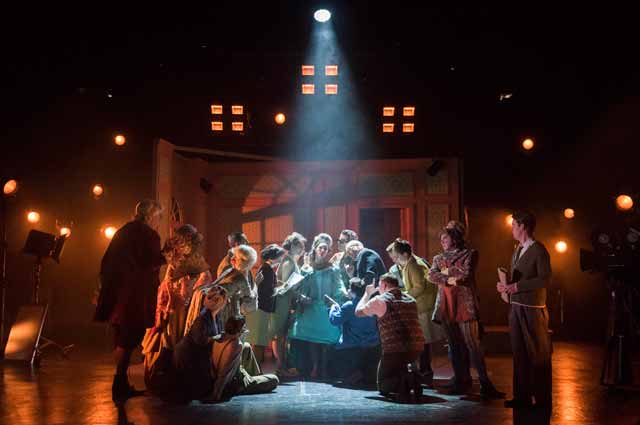 There are, broadly speaking, two methods for updating operas from their original setting to another time and place. The first is to find a relevant parallel with another era and then let the work speak as it always does within this new frame of reference. For example, Così fan tutte might be set in the Second World War to play on the fact that during it women found greater independence, thus providing an explanation for why the sisters choose to follow their own needs and desires. In this instance, although the sets and costumes would be altered, and the emphasis on a few points possibly adjusted, the story would ultimately be told as it always is.

The second is to introduce a take on the piece that requires the story to be altered to fit the new scenario. This approach generally carries more risks as reinterpreting the work can miss the point of the original, while plot points can feel as if they have been hammered into place to fit the new concept. If, however, these pitfalls are always present, Daisy Evans’ new production of La traviata for Longborough Festival Opera succeeds in avoiding them as it presents a radical, but highly successful, reinterpretation of the work.

Evans wanted to steer away from portraying Violetta as a courtesan ‘involved in a clandestine industry’, and consequently sets the action in 1950s Hollywood with the heroine being, like Marilyn Monroe, ‘a young star, surrounded by sharks and tigers keeping her sweet for the camera and them’. This necessitates the changing of the setting of Act I from a party to a studio set where they are shooting a film about Marie Antoinette. Violetta is the star of the film while Alfredo is an aspiring actor who appears here to have got a job on the set. With the likes of the Barone Douphol and Marchese d’Obigny being portrayed as famous actors in lavish, period costumes, and Alfredo as a humble worker in civvies, this emphasises the class system that is present in the original as the latter is no more than ‘a young bourgeois from a provincial family’.

During ‘Libiamo ne’ lieti calici’, at the moment when Violetta and Alfredo sing alternate lines, the latter reads his from a script in his role as a prompt, as if he is trying to keep her own messages ‘on script’ as he contributes his own. The pair’s encounter in Act I when they sing ‘Un dì, felice, eterea’ takes place more privately in Violetta’s dressing room between takes. Their ‘Addio’ at the end of it is followed by the burst of music as the guests declare they are leaving, which here is portrayed as the next scene being filmed. 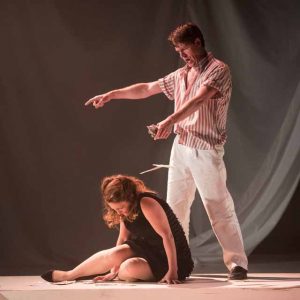 Loren Elstein’s sets for Act I and Act II’s second scene, where ‘Noi siamo zingarelle venute da lontano’ and ‘Di Madride noi siam mattadori’ are presented as shoots for a Surrealist film, cleverly exploit Longborough’s stage. It is opened out to the full with no attempt to hide the real rigging that would normally be hidden in the wings, but which would be found on a film set. Similarly, lights are there both to serve a functional purpose and to act as props. The production is sung in Italian, but the translation as seen in the surtitles is adjusted to fit the new setting. So Violetta sings of how Alfredo haunts her in her dressing room and Germont, when he erroneously believes that Violetta is living off Alfredo’s money, suggests that his son had to sell his cars.

The interaction between Violetta and the father is also affected by this new frame of reference. If it could ever be argued that Germont’s fear of how others will judge him results from his belief that he is more important than he really is, this idea is taken further by making him a suburban dad in a cardigan who would not look out of place on Happy Days. It is not that this Germont does not necessarily bleed inside as he asks Violetta to make the ultimate sacrifice. However, while a nineteenth century bourgeois figure would have had sufficient standing, and learnt enough etiquette, to handle the situation with at least some sensitivity, this Germont seems so desperate that all he can do is detach himself from Violetta completely, sitting across the room from her and not even embracing her.

In this version Violetta does not die of consumption, but rather something that makes Germont and Alfredo more responsible for her death. This is because tuberculosis would have caught up with her eventually, even though their actions expedited its taking hold. Here, however, we are left knowing something that the men do not so that when Alfredo tells Violetta in Act III that she will live, he is not making some desperate or idle promise, but rather speaking something that he has every reason to believe is the truth.

Claire Egan, who shares the role of Violetta over the run with Anna Patalong, is outstanding. Her voice combines a degree of richness with a glistening, shimmering quality that reveals great nuance in sound, excellent phrasing and some wonderful pianissimos towards the top of her register. Her achievement is made all the greater by the fact that the direction is physically demanding as, for example, she sings part of ‘Sempre libera’ embracing Alfredo as they both lie horizontally on a table. Peter Gijsbertsen is equally strong as Alfredo, asserting an expansive and aesthetically pleasing tenor, while Mark Stone reveals an immensely powerful baritone as Germont, throwing his arms out every time he sings ‘Piangi’ to make his proclamation to weep even more overwhelming. Thomas Blunt’s conducting achieves an excellent balance between clarity, nuance and energy with the result that this interpretation of La traviata is as successful as it is innovative.