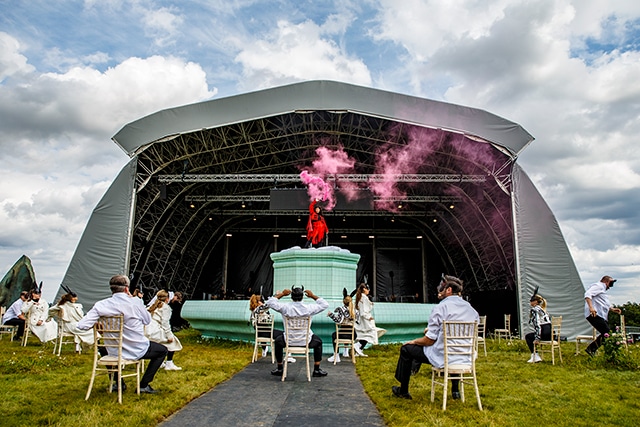 When summer opera festivals were planning their 2021 seasons, no one knew what the Covid-19 situation would be and what performance restrictions would apply. Nevill Holt Opera ingeniously combatted the uncertainty by deciding to hold its 2021 festival outdoors, with a specially designed stage and bespoke seating arrangements.

As a result, NHO may be the only such venue that has succeeded in increasing its capacity compared with previous years. Its normal opera house, in a recently converted historic stable block courtyard, seats 400, but its new outdoor space can hold 650. Standing in front of its normal theatre, a giant covered stage contains the orchestra of Manchester Camerata, superbly conducted by Nicholas Chalmers, while in front of this in the open air lies the performance space. This is covered in turf with three ramps, the entrances and exits for the performers, running up to it from the left, right and centre. Tiered seating, a proportion of which is covered from the elements, takes the majority of the audience, but there are also areas on either side of the stage where people can sit on the floor and have a ‘ringside’ seat. Flooding out from behind the complex is the beautiful Leicestershire valley, although some seats are better for actually enjoying a view of this during the performance than others.

Given the outdoor setting, the singers are inevitably miked, but the large performance area also places unique demands on the staging itself. Fortunately, director Jamie Manton is on hand to ensure that the production fills the requisite space. If there are a few occasions when less would have been more, generally he achieves the required level of exuberance while also letting the more tender and emotional aspects speak for themselves.

Camilla Clarke’s set sees a giant fountain take centre-stage, which actually runs with water at the start and can prove distracting, though mercifully it is switched off in time for ‘Libiamo ne’ lieti calici’. In and around the fountain are strewn presents, inflatables, busts and torsos, as well as models of sheep and stags. Add in some colourful costumes (Barone Douphol is dressed as a pig) and Violetta’s party certainly goes with a swing, while also being strong on developing character. The top of the fountain acts as a focal point, and as both Alfredo and Violetta stand on it to sing ‘Libiamo ne’ lieti calici’ she is shown to be far more at ease in front of a crowd than he. 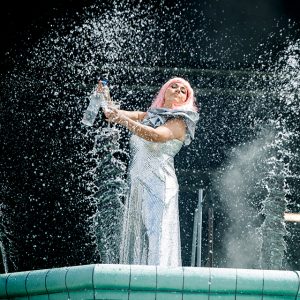 If, however, it works in the setting to make the party as lavish as this, it proves less successful to ‘multiply out’ Violetta’s private moments in the same way. Large spaces such as this either have to be filled to the brim with activity or allow us to focus on a single person, and it is anything in between that can prove underwhelming. Here, the chorus collapse on the stage at the point at which they depart from the party so that during ‘Sempre libera degg’io’ and ‘Ah fors’è lui’ they sway on the ground, rise and gesture. Rather than magnifying Violetta’s emotions, however, they undermine the intimacy and personal nature of her dilemmas, and the arias would have proved more moving if we had remained the sole audience for them. Nevertheless, moments such as that in ‘Un dì, felice, eterea’, when one second Violetta is sardonically tearing flowers from her bouquet in front of Alfredo, and the next the pair are gazing directly into each others’ eyes while circling each other, show that this production can pack an emotional punch.

Act II’s first scene has some effective touches so that we really see Alfredo living a cushy life as he lies on a sun bed drinking champagne. After, however, Annina tells him of their desperate financial situation he plunges waist deep into the fountain trying to salvage any pound notes that are floating in it. Violetta also appears in this scene as a country girl (working while Alfredo relaxes) in wellington boots and a blond wig. In fact, her hair changes colour in each of the first three scenes, from pink to blond to blue, until she removes her wig when Alfredo ‘exposes’ her at Flora’s party, with it then staying off for most of Act III. Overall, Flora’s party has a more pleasing aesthetic as the chorus are dressed in black and white, even as they sing and dance ‘Noi siamo zingarelle venute da lontano’ and ‘Di Madride noi siam mattadori’ to Clara Bajado’s choreography, with the long ears on the women’s bunny masks being ‘mirrored’ by the horns on the devil masks donned by the men. It does, however, feel a mistake to bring on the entire chorus to witness Violetta’s death in Act III. There may be something inevitable about her demise, but their anticipation of it since they carry flowers as if attending a funeral, detracts from the very real and personal tragedy in the moment. Nevertheless, the ending is still emotional as the fountain springs a leak as if signifying tears, or the opening of floodgates to tragedy, while Alfredo’s and Germont’s numbed expressions speak volumes.

The production features a young girl. On the physical level she is Germont’s daughter, who he introduces to Violetta in their Act II encounter to help persuade her to leave Alfredo by showing who she is hurting. When during the Act I Prelude, however, we see her playing with Violetta, who being ill cannot keep up, she is shown to be a young Violetta and thus a symbol of carefree youth. The masterstroke to this move is the implication that Violetta agrees to Germont’s demands because she sees, and wishes to preserve, her innocent self in his daughter.

All three main principals are former Jette Parker Young Artists at the Royal Opera House, and all are extremely strong. Susana Gaspar proves equally adept at portraying Violetta’s vivaciousness and vulnerability, and her beautiful yet sufficiently textured and nuanced soprano makes ‘Addio, del passato bei sogni ridenti’ especially moving. Luis Gomes, with his expansive, ringing tenor that makes ‘De’ miei bollenti spiriti’ particularly successful, gives Alfredo exactly the right persona for one who is rather too inclined to see himself as a victim, and as consequently being justified in behaving as he does. Michel de Souza creates a very appealing Germont, for whom we really sense that it is genuine love for his own family that sees him pursue his ‘cause’. There is some immensely warm and engaging singing along the way, with the moment in which he chastises Alfredo at Flora’s party being just one of many that displays this to the full.

Following the conclusion of the run of La traviata, Nevill Holt Opera’s 2021 season continues with Don Giovanni (19 to 25 August 2021). For further details of both productions and tickets visit the NHO website.