Rodula Gaitanou’s La traviata, the opening production in Opera Holland Park’s 2018 season, is an exceptionally intelligent affair. If, on the surface, the staging might seem a little conservative, it is its astute approach to measuring out the drama as a whole that actually enables parts of the action to feel highly driven. The intensity that results then makes us really invest in the characters.

One can sense traces of Richard Eyre’s 1994 production for the Royal Opera in Cordelia Chisholm’s set, as it features a cylindrical room, albeit here it is placed to one side rather than centre-stage. By having this surrounded by a curtain, which can be drawn or open, opaque or transparent, we gain a sense of Violetta’s public and private sides, and how the divide between them is not clear-cut. At the start we glimpse her behind a net curtain preparing for her party, but even this is enough to suggest that she is not as well recovered as she would like to be.

Running from this room is a diagonal wall that can create an open or enclosed space depending on the position of the doors that fill its arches. In this way, we see the guests dancing behind the arches as Violetta and Alfredo sing ‘Un dì, felice,’ while in Act III the carnival revellers momentarily burst through them into Violetta’s house. With the set-up, however, making the space seem as symbolic as it is real, this feels entirely appropriate.

The spacing of characters is strong, which means that not only is it clear what is happening at every moment in Act I, but that we can hone in on the dynamic between Violetta and Alfredo during ‘Libiamo ne’ lieti calici’ to the point that they seem to create pools of stillness within the mass of activity. At Flora’s party, the level of dynamism is just right so that we do see some couples getting amorous, and the hostess wielding a whip during ‘Noi siamo zingarelle’, but do not ever feel that things have been pushed too far. Once again, amidst everything that is happening, our eyes are drawn at the end to Alfredo and Barone Douphol confronting each other. 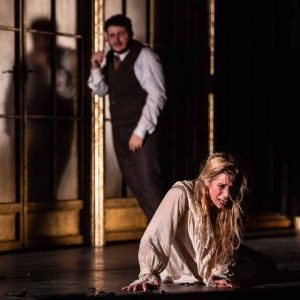 There is an enormous attention to detail as the renewal or replacement of flowers is seen on several occasions, and Violetta is actually given some apparatus to help with her breathing in Act I. This is not, however, a sign of any modern twist being placed on the production, because the primitive equipment is clearly from the nineteenth century. The balanced approach to the staging overall, however, means that some dynamic moments are able to rise out of it. At the end of Act I there is no continuing doubt or ambivalence in Violetta’s mind as we actually see her and Alfredo join hands and flee to the country. During Alfredo’s first Act II encounter with Germont he even fells his father to the ground in his anger, while Alfredo is subsequently knocked to the floor as the guests at Flora’s party condemn him. At the other end of the spectrum, ‘Addio, del passato’ and ‘Parigi, o cara, noi lasceremo’ are kept entirely free from superfluous gestures so that the emotions flow entirely naturally from the characters, and enable us to feel immensely for them. The ending is equally emotive when, under Simon Corder’s evocative lighting, we see Violetta die in Alfredo’s arms.

Lauren Fagan, who appeared as Donna Anna here last year, is an excellent Violetta, with a voice that reveals enormous scope and flexibility to meet the part’s disparate demands. She demonstrates great accuracy in her shaping of phrases, and frequently brings just the right level of thickness to her sound to reveal the character’s depth and sincerity. This Violetta can be the social butterfly, but she is also a woman of taste and discernment so that at the parties she can occasionally seem a little annoyed at the crude behaviour of others.

Matteo Desole, making his Holland Park debut, takes a little longer to warm up as Alfredo, and, as he does so, volume levels can vary from line to line in ways that are not entirely demanded by the arias. However, the problem does not last long, and when he is on song his voice feels as free as it is striking and expansive. The sense of ease that he brings to ‘De’ miei bollenti spiriti’ and ‘Oh mio rimorso!’ makes them stand out. He also embodies the character well, so that Alfredo feels like a ‘lesser’ person than Violetta in exactly the right way.

Stephen Gadd, with his strong and assertive baritone, is also superb as Giorgio Germont. During his first encounter with Violetta, he manages to show the way in which the character moves from stern expectancy to sorrowful empathy, while still maintaining enough underlying consistency to make him feel thoroughly believable. His mood changes in his meeting with Alfredo that immediately follows feel more violent and less naturalistic, but this scene, more than his one with Violetta even, does allow us to hone in on the less noble side of the character. Matthew Kofi Waldren conducts the City of London Sinfonia with immense vigour and skill, and the result is an extremely strong and moving opening to Opera Holland Park’s 2018 season.

Stephen Aviss plays Alfredo on 17 and 21 June. The Young Artists Performance on 11 June features a largely different cast. For details of this, and all of the productions and events in the 2018 season, visit the Opera Holland Park website.

Opera Holland Park has released a film entitled Hip Hop to Opera, which sees eight teenagers introduced to opera for the first time. It can be watched online.