La traviata is back at Opera Holland Park. It is different but, if anything, even better than before. 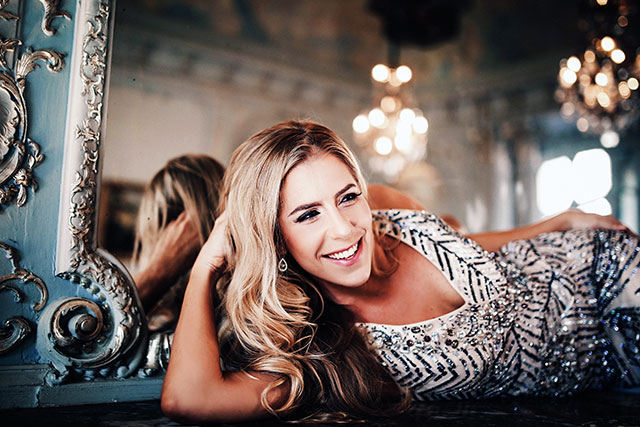 Rodula Gaitanou’s La traviata of 2018 is the only production in Opera Holland Park’s 2021 season that represents a revival. As a result, it acts as the best illustration of exactly how the company has had to adjust to the difficulties posed by COVID-19 by providing a direct point for comparison. It is not, however, just what happens on stage that is different this year. Set designer takis, who has numerous credits to his name at the venue including Un ballo in maschera (2019), La rondine (2017) and Die Fledermaus (2016), has reimagined the entire stage and auditorium that lies beneath the venue’s canopied roof. Capacity is down from 1,000 to 400 and all audience members sit in socially distanced bubbles. When seen altogether, the auditorium chairs, which have been gathered from a variety of sources including Holland Park’s own 2017 production of La rondine, create a work of art in their own right as they are arranged on a far shallower tier than the raked seating of previous years occupied. The result is an area that feels more spacious on the one hand, and more intimate on the other.

In this production, much of Cordelia Chisholm’s set, which features a beautiful cylindrical room at one end, remains the same as before. By having this surrounded by a curtain, which can be drawn or open, opaque or transparent, we gain a sense of Violetta’s public and private sides, and of how the divide between them is not clear-cut. Then running from this room is a diagonal wall that can create an open or enclosed space depending on the position of the doors that fill its arches. There are, however, many differences in the staging in response to circumstances. I did not spot Violetta using any breathing apparatus in Act I this time, which may have posed an infection control risk. Before, in Alfredo’s first Act II encounter with Germont he actually felled his father to the ground in his anger, whereas this time Germont raises his arm to stop him from doing so.

Perhaps the most notable change is in the size of the (excellent) Opera Holland Park Chorus, which has an effect on the dynamics of the two party scenes. The spacing of the performers was extremely strong in 2018, meaning it was always clear what was happening at every moment, and that we could hone in on the dynamic between Violetta and Alfredo during ‘Libiamo ne’ lieti calici’ to the point that they seemed to create pools of stillness within the mass of activity. This strength is both retained and, with the smaller chorus, enhanced. For example, the use of flowers throughout as a metaphor for transience comes into sharper focus now. The production plays on Alfredo’s joy on discovering that he may visit Violetta as soon as the flower she has given him has faded (which means tomorrow), so that during the Prelude we see a servant replacing flowers in several vases in Violetta’s house. On the physical level it reveals preparations for yet another party, but also acts as a metaphor for Violetta’s inescapable situation because, much as we would love renewal to be the watchword, we know these new flowers will ultimately wither as well. Violetta also references this point in ‘Libiamo, ne’ lieti calici’, while her country house in Act II is filled with potted plants, one of which is dropped leaving a servant to sweep up the shattered remains.

“It is not, however, just what happens on stage that is different this year”

The characters of Annina (Ellie Edmonds) and Dr Grenvil (Henry Grant Kerswell) are also delineated extremely well. Annina is with Violetta during the Prelude, Grenvil is a strong presence at both parties, and both are seen with Violetta as she retires at the first of these. All of these things emphasise the sickening inevitability of her demise, for which this pair are only too prepared, as do other factors. In Act III the carnival revellers momentarily burst on but seem to be held back by scythes that fall over their bodies.

Act III is the moment when the staging truly departs from what was seen in 2018. In the new configuration, the sixteen-strong City of London Sinfonia, superbly conducted by Matthew Kofi Waldren, performs Jonathan Lyness’ reduced orchestration and sits in a dip surrounded by the main stage behind and a gangway that runs in front. Although having the final action played out on this gangway before the orchestra would have been inspired by the need to observe social distancing, the effect is extremely poignant. It grants an immediacy to the scenario that cannot fail to move, and also stresses the futility of the situation as we see quite literally how Violetta and Alfredo cannot be together. With the sumptuous cylindrical room standing behind, we gaze on the world that we long for the two lovers to inhabit, while witnessing the stark and hopeless reality for them.

The three main roles are taken by the people who played the parts in 2018, and all repeat the magic that they cast on that occasion. Lauren Fagan is spellbinding as Violetta, revealing such brilliant control over her sound at every point that her most assertive and sensitive phrases are delivered with equal brilliance and emotion. Matteo Desole as Alfredo reveals an extremely free and expansive sound, especially in ‘De’ miei bollenti spiriti’ and ‘Oh mio rimorso!’. He also embodies the character well so that, while this Alfredo is certainly likeable, he does make him feel, appropriately enough, like a ‘lesser’ person than Violetta.

Stephen Gadd, with his assertive baritone, is an outstanding Germont. All Germonts have to reveal both an expectant man on a mission to achieve a specific outcome, and a person who bleeds inside as he recognises the sacrifice he is asking of Violetta. Gadd’s skill rests in the ambiguity he conveys, so that when Violetta sings ‘Ah! dite alla giovine sì bella e pura’ we are left unsure whether his expressions are of someone who is annoyed at her going on at length when he just wants to seal the deal, or of someone who really cannot take the pain of her suffering. The answer is both because he wants to get through everything quickly precisely because it is too painful to witness her grief, but on another occasion a simple turn as he dons his hat and exits brings his less sympathetic side into sharp focus once more.

The performance at 2.00pm on 19 June is a Discovery Matinee and Relaxed Performance.