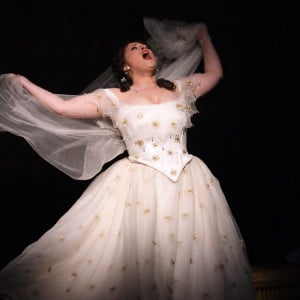 Richard Eyre’s 1994 Royal Opera House production of La traviata may not be revolutionary, but many subtle touches are to be found within its curved walls. Designer Bob Crowley works virtually every scene around a semi-circular set, with each one employing its own tools and techniques to shed light, and provide commentary, on the action.

Act I takes place in a sumptuous Art Deco interior, revealing Violetta’s role as the archetypal fashionable Parisian. The most important features, however, are the doors. Whenever these are open, and people are free to enter, Violetta assumes her frivolous, sociable persona. As soon as they close, on the other hand, she becomes a far more introverted character. Indeed, the end of the Overture sees her sitting thoughtfully to one side, and it is only when the doors open at the start of the Act that she changes. They swing out once more as she moves from the contemplative ‘Ah fors’è lui’ to the carefree ‘Sempre libera degg’io’, in which she reasserts her wish to enjoy Parisian life to the full.

Similarly, Act II’s gambling scene takes place beneath an ornate palace roof, its gilded surfaces lying at peculiar angles. Here we find a red bullring and a casino table with overhanging metal light. It is not to be taken as a literal space, but clearly the bullring alludes to the antics of Gastone and his friends as matadors, and creates an appropriate arena for action that all too readily alludes to gladiatorial combat. At the same time, the insertion of the more modern table and lamp under a palace roof may suggest that this form of gambling has taken its place within a far greater history of wealth and decadence in Paris.

Amidst a very strong cast, the performance of Diana Damrau, with her voice of searing beauty, stands out. As Violetta, she introduces great resonance to her lines on occasions, but is also capable of bringing an exquisite purity to her soaring phrases and hushed sounds. Her acting is also highly effective, making her command of the stage during the Act I party seem natural and effortless, but also bringing a believable humanity and frailty to her character in Act III. Francesco Demuro, making his debut as Alfredo with the Royal Opera, initially feels less comfortable as the thought going behind every gesture and line that he sings seems a little too obvious. He soon gets into stride, however, and reveals a highly clean, pleasing and assertive sound, especially in ‘De’ miei bollenti spiriti’ and ‘Oh mio rimorso!’.

With his trademark rich baritone, Dmitri Hvorostovsky’s Giorgio Germont commands the stage without ever presenting even the slightest caricature of a stern or dictatorial father. One senses that the values he embraces and attitudes he expresses derive more from social conditioning and societal expectations than any inherent hardness in his own heart, and his Act II encounter with Violetta is one of the highlights of the evening

Nadezhda Karyazina’s Flora, Jihoon Kim’s Doctor Grenvil and Sarah Pring’s Annina provide fine support, while in the pit the absence of a score is not the only indication that Dan Ettinger knows and understands the opera inside out. At times he drives the pace forward with relentless energy, and at others he holds back far more, but everything he does seems entirely appropriate. The singers respond well to the challenges he sets, but he in turn offers them a lot in the way that he utilises the orchestra to support each of their individual sounds.

Casts vary over the run. For further details click here.

The Royal Opera House’s La traviata will be relayed live on BP Summer Big Screens around the country on 20 May. For details of venues click here.