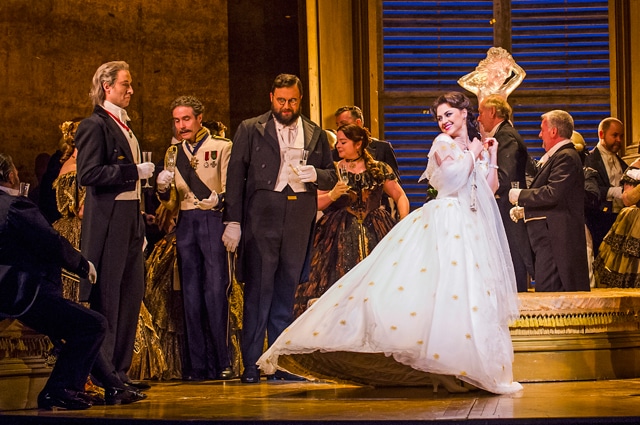 Richard Eyre’s 1994 production of La traviata for the Royal Opera House has always been elegant and tasteful. Designer Bob Crowley works three of the four scenes around semi-circular sets, and while each employs its own tools and techniques to provide commentary on the action, a few ideas underlie them all. Each seems geared towards contrasting the public image of Violetta as the frivolous, fashionable Parisian with the more private, introverted character.

Act I, for example, takes place in a sumptuous Art Deco interior, and throughout the scene Violetta comes across differently when the doors are open, and she is surrounded by people, than when she is alone or just with Alfredo. All of the sets, however, are structured to ensure that the divide between public and private space is not entirely clear-cut, suggesting that Violetta can never truly escape society’s prying eyes. For example, when she begins her one-to-one encounter with Alfredo, although the party guests have left the room, the doors remain open so that there is always the chance they might dance past the entrance and peer in. Similarly, once the guests have dispersed in Act II’s second scene they can still shuffle beneath the low arches of the set’s ‘bullring’, and even when Violetta is on the verge of death in Act III huge shadows of carnival revellers appear behind the blinds in her room.

If the sets are something of a constant in this long-standing production, every cast brings something original to the table, and the performers in this current revival by Daniel Dooner are no exception. Russian soprano Venera Gimadieva played Violetta at the Glyndebourne Festival in 2014, and now makes a very strong Royal Opera debut. Her vibrato and coloratura are excellent, and her voice constantly carries an air of lightness about it. She very much looks the part, and has a natural presence meaning that she never has to indulge in histrionics in order to portray the social butterfly. She conveys all of the requisite emotions sensitively and effectively. 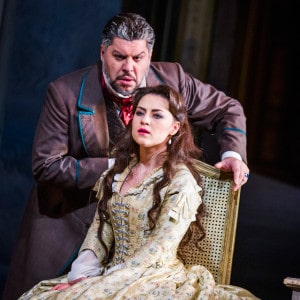 Italian baritone Luca Salsi is an excellent Giorgio Germont, with a firm and resonant voice that carries a lot of colour, and he actually feels far less expectant than many Germonts. Often performers play the character as if all of his words and comments to Violetta have been worked out in advance with the sole intention of winning her over to his point of view. Here, however, he really has to plead with her in the moment to let Alfredo go, and this approach feels effective because it means we witness a genuinely rattled character rather than a rehearsed and sanitised figure. To an extent, the beginning of their encounter does not reveal the best of interactions because visually his large, pleading gestures do not sit comfortably with her more serene and sensitive approach. This contrast, however, provides an excellent starting point from which we can witness how Violetta really wins him over to feeling for her as the scene progresses. As a result, we can sense just how sickened Germont feels inside as he sings ‘Di Provenza il mar, il suol’, telling Alfredo how fortuitous it was that he was there at the moment Violetta walked out on him when he knows that it was he who caused her to do so.

From among the more minor roles, Sarah Pring as Annina, Andrea Hill as Flora, James Platt as Doctor Grenvil and Yuriy Yurchuk as Baron Douphol all stand out. Yves Abel’s conducting is effective, maintaining a firm grip on tempi for the most part while also injecting an appropriate degree of punch into the music.

Only on the morning of opening night did Saimir Pirgu reluctantly conclude that his throat infection had got the better of him and that he would be unable to sing Alfredo that evening. Fortunately, Jette Parker Young Artist Samuel Sakker was able to step into the breach, cramming in an afternoon rehearsal for La traviata following his planned morning session for the upcoming L‘Étoile. The hurried preparations meant that in absolute terms the chemistry between Alfredo and Violetta was not as strong as it could have been, but given the circumstances Sakker did exceptionally well, as over the evening he relaxed into the role and his pleasing voice really warmed to the task. If this is what he could do as Alfredo when stepping in at the last minute, I would love to see him play the part with a fuller preparation, and he will forever be able to look back with pride on the night that he saved a major performance at the Royal Opera House.

La traviata will be broadcast live to selected cinemas in the UK and worldwide on 4 February, while some cinemas will show encore screenings on subsequent days. For details of participating venues visit the Royal Opera House Live Cinema Season website.