La Voix Humaine and Send (Who Are You? I Love You) @ Houston, Texas 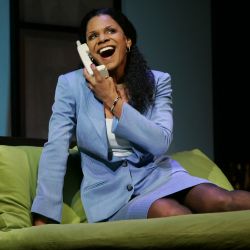 For her first foray into opera, Broadway soprano Audra McDonald takes on a world premire as part of an ambitious one-woman double bill.

McDonald has won four Tony Awards for her work in musical theatre.

The classically-trained Juilliard School graduate is also a recording artist whose extensive concert tours have included performances with the London Symphony Orchestra and at the BBC Proms.

Since LaChiusa and Price co-conceived Send as a reflection and companion piece to La Voix, the works explore two sides of the same coin. Both deal with how lovers connect – or fail to – and how communication technology brings us together yet frustrates us. More importantly, both explore how technology, as opposed to face-to-face communication, allows us to lie to others and to ourselves.

Despite being set in a different place and at a time later than La Voix Humaine, Send can be seen as a prequel of sorts. It chronicles the hopeful start of a relationship while La Voix records its bitterend.

In Send, a present-day New York professional woman uses an internet dating service to search for a mate. While she awaits the man’s phone call, she imagines not just what their first conversation will be like, but thetrajectory of the whole relationship. She fantasizes an entire life together – the first date, becoming lovers, marriage, children, his affair, her despair, forgiving, reconnecting, growing old together, dying – all before she has ever heard his voice.

McDonald’s versatility was evident as she navigated swooping lyrical passages as well as numerous stops, starts, and mood changes. She deftly handled moments of humour as well as anxiety. Her character is a modern everywoman andMcDonald made it easy for the audience to identify with her.

Although technically this is a one-woman opera, a prerecorded track of McDonald’s voice was used to represent internal dialog and imagined conversations with her awaited dream man. It was disconcerting for the audienceto hear McDonald basically sing a duet with herself and even more so to hear her voice while seeing her eating.

The orchestra was on the rear of the stage behind a scrim during both operas, which was distracting. Because it was louder than it would have been in an orchestra pit, McDonald wore a body microphone. Another distracting element in Send was the embellishment of the simple bedroom set with video screens bearing a composite photo of a handsome man, the heroine’s imagined lover-to-be.

La Voix Humaine (The Human Voice), with music by Francis Poulenc and libretto by Jean Cocteau, premired in 1959. A desperate woman is in her bedroom, conversing by phone with the lover who has left her. She is beset by the telephone woes of the time: disconnections, interruptions and eavesdroppingby the operator and others on the party line. As she speaks to her ex-lover, she goes though a range of emotions, alternately putting on a happy face or revealing heartbreak and despair. She lies, cries, blames herself, makesexcuses for her lover, and shows herself to be suicidal.

This version was sung in English. At nearly 45 minutes long, it is a vocally demanding piece with frequent interruptions and drastic mood changes. Again, McDonald did a good job of conveying her character’s emotions through her voice. But despite McDonald’s skill, the ending as presented here seemed less definite and less dramatic than it should be.

As a double bill, Send and La Voix give us almost too much of the same. By the end of the second opera, I found myself wanting to hear with another voice and see a different setting.

Despite changing technology – the program had to include an insert explaining the party line telephone system to younger audience members – La Voix Humaine has held up well. It will be interesting to see if the lessmeaty Send does the same.