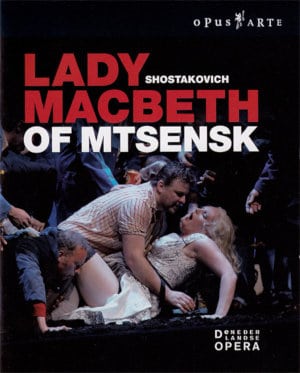 The best ingredient of this production is the musical performance. Mariss Jansons – perhaps the most European (and outwardly the least demonstrative) among Russian conductors currently of fame delivers Shostakovich’s score with full understanding, passion but also with discipline.

During the whole performance, recorded live in Amsterdam on 25 and 28 June 2006, I spotted only three notes which had different dynamics from those marked in the score: when Katerina’s husband Zinovy is murdered, he is supposed to be singing his last three notes (get the priest) weaker but here he does not. The standard of orchestra playing is immaculate throughout.

The international cast of singers are also integral part of the excellent musical performance. To my ears, in the key role of Katerina, Eva-Maria Westbroek sings with a slightly indeterminable pitching most of the time. She is never out of tune but she does not place her notes in the centre of pitches. The human voice is vulnerable and it is possible that Westbroek had a touch of cold. Her acting is immaculate as it was at the Royal Opera House Covent Garden, also in the role of Katerina, in September/October 2006.

Vladimir Vaneev, playing both Katerina’s father-in-law and in the last act the Old Convict, towers above Westbroek in actual size as well as in musical delivery. In the Royal Opera production father-in-law Boris is a lecher, doing his best to try to seduce (or perhaps even to rape) Katerina. In the Amsterdam production of Martin Kušej, Boris character appears as created by the original author Leskov. Boris is a primitive brute, he fantasizes about Katerina but he sticks to certain standards which he is attempting to uphold. He rules his household with iron fists but he is horrified by his own desire for Katerina and he stops short of encroaching on his son’s property that is on his son’s wife. For me Vaneev is the most outstanding singer and performer on this DVD set but all singers are excellent. Christopher Ventris (Katerina’s lover Sergey) and Carole Wilson (Aksinya) represent the UK with flying colours.

Katerina in this production is not as attractive as in Covent Garden. The opening scene, showing Katerina with a dozen or perhaps even more pairs of shoes, indicates her greed. Director Kušej has aimed to produce a scenario which could appear in the tabloid papers. These are ordinary, somewhat crude people – Katerina’s desire for love seems to be close to lust. Yet the music Shostakovich composes for Katerina shows a tender side; Shostakovich is clearly on Katerina’s side.

Aksinya’s crowd rape is more graphic and more nude than my prim self would like but it is realistic. The lashing scene leaves the actual lashing to the orchestra (as Shostakovich orchestrates the lashing very clearly for over a minute) but seems to indicate sexual pleasure from it.

I was embarrassed about the shabby peasant’s caressing his penis (for which I saw no need in his drinking scene). I am not convinced by the scene change in the last act: according to the libretto it takes place in a Siberian prison camp, yet Kušej places it in a purgatory full of semi-nude people. The final love scenes in front of these crowds show the horror and humiliation of Katerina’s final journey but such liberty at interpretation is arguable. According to the story Katerina kills her love rival Sonyetka and commits suicide. In this production Katerina is murdered by the other convicts (or lunatics?).

The cast sings in Russian but the DVD set provides surtitles in six languages. On the top of the three hours opera we also get an excellent documentary film of 65 minutes by Reiner E Moritz. Carole Wilson sums up my thoughts when she says in the documentary: “Working with Mariss Jansons and the Concertgebouw is like listening to a three hours long Shostakovich symphony.”