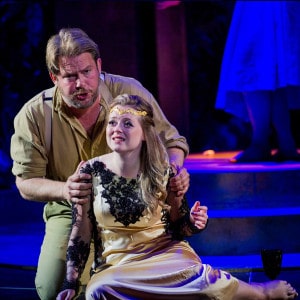 If Daniel Slater’s current production of Aida represents Opera Holland Park at its most outlandish and flamboyant, Aylin Bozok’s Lakmé stands at the opposite end of the spectrum in being extremely tasteful and understated. If anything it goes too far in its endeavours to be ‘appropriate’ as there are times when a little more imagination and variation are required, but overall the simple staging is highly effective.

Morgan Large’s set consists solely of a Brahmin temple, which stands right in the middle of the broad stage. At the centre of this is a cylindrical shrine, from which Lakmé frequently appears. Surrounding it are a series of interlocking, filigreed lotus leaves that can be closed around the shrine or opened out. Although these sport traditional Indian designs, the ensemble as a whole seems modern so that it feels restrained and tasteful in the same way as Art Nouveau design can do.

By making the temple the only feature, Bozok may be showing just how much the British are infringing on another culture, as the staging hardly suggests that there is a symbiotic relationship between the two people. Whenever the British appear they are treading on ‘alien’ ground, and consequently look uncomfortable as they attempt to assert their authority.

On either side of the temple are vast areas of bare stage, which the chorus of Indian people generally frequent. Their sound is certainly strong as they confront us en masse, but all too often they simply stare out, advance slowly or offer up stylised hand gestures. It is fine to employ these techniques on occasions and they can be powerful, but their repeated use becomes wearing. The marketplace scene offers something slightly different, but represents one time when so much more is required. The sound is persuasive but there is no real sense of the hustle and bustle of the crowd, which could have been rendered with far more dynamic direction and the addition of stalls and merchandise.

The notion of stylisation also pervades many other aspects of the production. During ‘Dôme épais le jasmin’ (the Flower Duet) Hadji becomes a third silent presence so that at times we witness a triangular formation of people kneeling and raising their hands. In some ways, this duet, brilliantly sung by Fflur Wyn and Katie Bray, requires nothing to distract from the singers, but overall the movements complement the piece well. This beautifully measured and precise performance is not about two singers trying to prove just how emotional they can be, and the simple movements become part of the strategy that keeps the performance so well in check.

There are other occasions when much is made of silent roles, with Hadji frequently gracing the stage as an onlooker and all-knowing presence. Lucy Starkey plays La bayadere and dances the ballet, but is also incorporated into other parts of the drama, just as Wyn is into the ballet. As the pair stare into each others’ eyes and grasp hands, it is unclear whether they are involved in a battle for supremacy within the temple, or are actually of one spirit, although their adopting of the same reclining pose in Act III certainly suggests the latter. Starkey’s appearance during ‘Où va la jeune Hindoue’ (the Bell Song) is also well judged as it does not overly distract from the singing, but enhances the sense of occasion so that Lakmé becomes even more of a focal point.

Matthew Waldren conducts superbly, keeping everything balanced and precise, which is not easy given both the tented area’s acoustic and the specific demands of this opera. Fflur Wyn is exceptional in the title role, with her rendering of the Bell Song epitomising everything that is good about her performance as her voice proves beautifully precise, exquisite in tone, and mesmerising in the upper register. She is matched well by the mezzo-soprano of Katie Bray as Mallika, while the two principal men also deliver handsomely.

As Gérald, Robert Murray’s transitions from one register to another are not always the most seamless, but the sound within each is beautiful, and when the overall smoothness is achieved, the results are very special. As Nilakantha David Soar’s voice could be a little more focused within certain ranges but overall he asserts his bass to stunning effect and his enunciation is impeccable. Nicholas Lester, Maud Millar, Fleur de Bray, Fiona Kimm and Andrew Dickinson provide excellent support as Frédéric, Ellen, Rose, Mrs Bentson and Hadji respectively.

The set for Act III remains virtually the same, only now the central cylinder represents a place of healing within the forest. Here, every singer is on top form, and with Howard Hudson’s excellent lighting generating atmosphere in abundance as Wyn and Murray take us to places unknown, a scene of mesmerising beauty caps an evening in which there is a considerable amount to enjoy.