Holland Park provides a master class in how to raise a pleasant and enjoyable opera to an entirely new level. 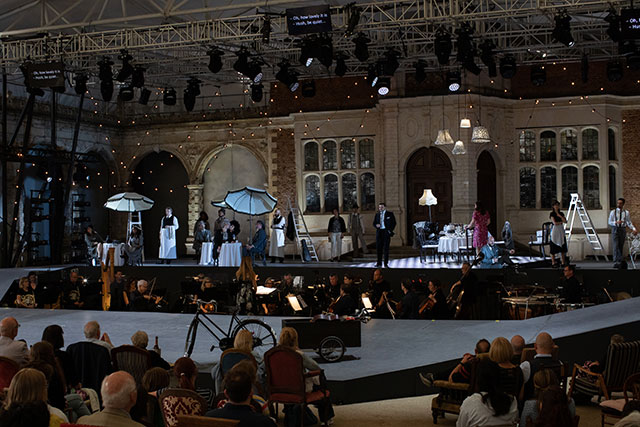 Opera Holland Park has a long and proud tradition of bringing to public attention works by Italian composers whose own considerable talents were eclipsed by those of their contemporary, or near contemporary, Puccini. In the past it has presented creations by Wolf-Ferrari, Cilea, Leoncavallo, Montemezzi, Catalani, Zandonai and Giordano, but one composer it has a particular appetite for is Mascagni, having in recent years presented Zanetto (2012), Cavalleria rusticana (2013), Iris (2016) and Isabeau (2018). Its current offering L’amico Fritz was also performed at the venue, then in a production by Annilese Miskimmon, in 2011, but this new presentation by Julia Burbach makes the opera feel like a substantially different piece. Despite probably being Mascagni’s second best known work after Cavalleria rusticana, I have always felt it to be a pleasant but slight creation, and, enjoyable though the 2011 production was, it did not fundamentally alter my view. This time around, however, I was left feeling quite breathless. I never expected to do so, and there may never again be a performance that inspires such a strong reaction in me, but certain nights in the opera house can elicit extraordinary things, and this was most definitely one of them.

Mascagni’s opera tells of Fritz Kobus, a wealthy philanthropist who is handsome and likeable, but has a particular aversion to marrying. That is until Suzel walks into his life, and the piece acts as a study in two people’s realisation of their feelings for each other. It is a sweet and tender story in which the journey is as important as the destination, as both people experience a range of emotions that they are at a loss to understand themselves. 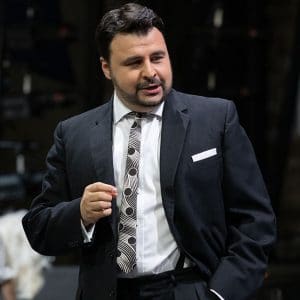 The opera was never handed a particularly distinct time and place, though the action seems to be set sometime in the nineteenth century and somewhere in Alsace. Julia Burbach exploits the opportunities that this lack of specificity affords with a staging that places the emphasis firmly on simplicity and aesthetics. In this way, Act I, which normally occurs in Fritz’s dining room, occurs in a cafe and hence puts the focus on the community as a whole. Designer Alyson Cummins fills the stage with chairs, tables, parasols and stepladders that all ‘glow’ white and hence generate a highly pleasing image. Puppeteers entertain those who sit at tables, and people freely leave the establishment while we as the audience are focused on the main protagonists. This highlights the fluid nature of the community, and the fact that even those people whose characters have not been designated the role of principal in the opera have their own lives to lead.

While the community is made to feel very real, the beauty of this production is that it raises these people’s arguably insignificant lives (even the landowner Fritz is hardly an emperor) to a higher plane, thus elevating the ordinary and every day to the realms of the spiritual. The white stepladders are not only the means to pick cherries but also provide a link to the heavens, highlighting just how far love can lift people up. Fritz’s friend, the gypsy Beppe, can be a caring overseer anyway, but here he possesses an angelic bent by being given a pair of wings. He dons these as he performs Act I’s violin solo, which in reality is played exquisitely (on the night I attended) by orchestra leader Charlotte Reid. He loses them, however, as he merely carries his violin case, thus revealing how it is when this travelling musician actually plays that he possesses a touch of the divine. The production also proves adept at contrasting the earthly and celestial by mirroring in the staging the opera’s own variations in mood and pace. So intense is the experience as Fritz and Suzel sing the ‘Cherry Duet’ that time almost stands still, yet at other moments four or five characters can move in formation, courtesy of Cameron McMillan’s choreography, and thus propel the drama forward.

Beatrice Venezi’s first rate conducting of the City of London Sinfonia, who play a reduced orchestration by Tony Burke, draws out all of the subtleties and nuances in the score, while the cast is uniformly excellent. As Fritz, Matteo Lippi, who played Ruggero here in 2017 and Gustavo in 2019, reveals a tenor that is immensely expansive while also being blessed with a lightness of touch and infinite smoothness. Lippi also imbues the figure with just the right brand of innocence so that we both relate to, and root for, him as he grapples with new, and poorly understood, emotions. Katie Bird, who sang Cio-Cio-san for West Green House Opera in 2018, reveals a soprano that is so secure and engaging that immensely interesting things going on in each of her registers still combine to create a very coherent whole. She also proves a fine actor as she conveys by turns innocence, tenderness, irritation, fear, sadness and ultimately love. Paul Carey Jones, who sang Wotan in Die Walküre for Longborough Festival Opera in June, is simply a class act as the Rabbi David, while Kezia Bienek proves an all knowing, not to mention all understanding, Beppe.

The performance at 14.00 on 18 July is a Discovery Matinee and Relaxed Performance.