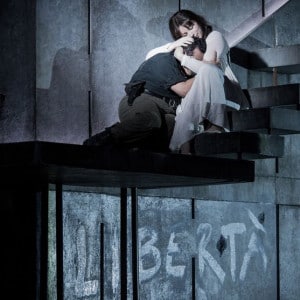 Opera Holland Park, and one director in particular, enjoy a great tradition of staging works by Italian composers whose own talents were perhaps overshadowed by those of their near-contemporary, Puccini. In 2013 Martin Lloyd-Evans staged Ermanno Wolf-Ferrari’s I gioielli della Madonna, last year he tackled Francesco Cilea’s Adriana Lecouvreur and now he revives his widely acclaimed 2007 production of Italo Montemezzi’s L’amore dei tre Re of 1913.

Running at just over ninety minutes without pause, it pares down every operatic theme and device to its absolute essence. In this way, the love triangles and conflicts between private love and public duty are played out through just four principals, with the minor characters and chorus providing only occasional, albeit important, support.

The opera is set in eleventh century Italy at a time when the Germanic conqueror Archibaldo, who crowned himself King of Altura, is old and blind. He previously married off Fiora, Princess of Altura, to his own son Manfredo to try to aid peace, but she was already betrothed to Prince Avito who now visits her at night while Manfredo is away at war. When Manfredo briefly returns Fiora swears her loyalty once more to him, and tells Avito she can no longer see him before finding she cannot resist his love.

When Archibaldo discovers Fiora’s infidelity he strangles her and sets a deadly trap for her lover by laying poison on her lips. Thus when Avito kisses her corpse he is destined to die but Manfredo is both mortified and moved to hear him utter that Fiora truly loved him, and kisses her too in an attempt to prove his own devotion and perhaps eclipse Avito’s ‘sacrifice’. Thus, Archibaldo, who Montemezzi was clear desired Fiora too, finds the victim of his scheme to be none other than his own son.

Lloyd-Evans sets the drama broadly in the modern day with the stage’s salient feature being a cylindrical concrete bunker designed by Jamie Vartan. This works because this opera is about specific individuals whose dilemmas are played out against a backdrop of war. As a result, the relatively Spartan stage enables the singers to dominate while the depiction of modern warfare gives the work a greater relevance and immediacy.

The grey of the concrete sets the tone for this monochrome production in which black and white prevail in everything from the costumes to the graffiti proclaiming ‘giustizia’ and ‘libertà’. The radiant white of the veil that Fiora unfurls when Manfredo leaves her stands out against the set’s more muted shades, thus contrasting the ideal of fidelity with the realities of a belligerent and passionate world. Fiora’s bedroom is inside the bunker while the rising steps on its outside represent the tower of the Castello d’Archibaldo. They are used to good effect in the Act II scene when Avito says that Fiora raises him up, while she claims that he weighs her down.

There are also many telling details. An undulating, zig-zagging path that wraps around the bunker gives the entire area an angular, expressionist feel while Mark Jonathan’s lighting is highly effective. When Manfredo laments Fiora’s death two shadows make it look as if three figures are in mourning, and the lower he stoops the more the respective images diverge.

Natalya Romaniw is thoroughly commanding as Fiora as her rich soprano, with its sumptuous and vibrant tone, hits truly ethereal heights. As Avito, Joel Montero’s tenor has a pleasing expansive quality, and if there is a sense in which he is pushing himself to his limits this only makes his performance feel more thrilling. Mikhail Svetlov has an assertive bass voice whose clarity vividly conveys the character’s feelings, Simon Thorpe is effective as Manfredo and Aled Hall makes his presence felt in the minor role of the castle guard, Flaminio.

Montemezzi’s music contrasts the most overwhelming passages with times when the singers are accompanied by the merest ‘whisper’ of sound. Peter Robinson’s otherwise excellent conducting occasionally allows the soloists to be swamped in the former moments, but he and the City of London Sinfonia positively relish a score that one minute sounds a little like Gianni Schicchi (written four years later) and the next is portraying the final breaths of the strangled Fiora through increasingly diminished pizzicato strings.