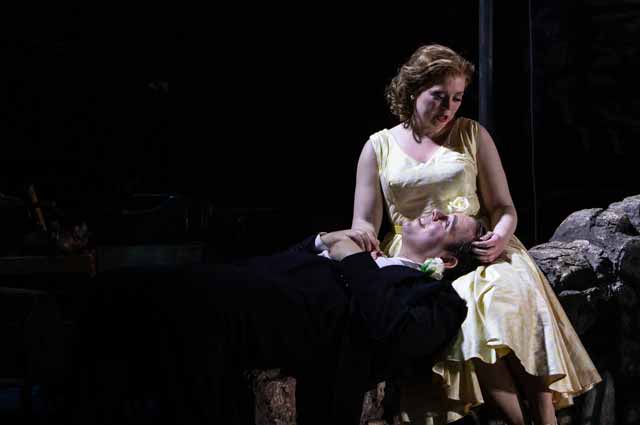 Opera Holland Park has a long and proud tradition of producing operas by Italian composers whose own considerable talents were eclipsed by those of their contemporary, or near contemporary, Puccini. Recent years have seen it take on works by Catalani, Leoncavallo, Mascagni, Montemezzi and Zandonai, and this year it presents two rarities by Wolf-Ferrari and Cilea. The former’s Il segreto di Susanna will appear in a double bill with Tchaikovsky’s Iolanta, while the latter is now represented by L’arlesiana.

Holland Park presented the composer’s more famous Adriana Lecouvreur in 2014, and while that recalls the elegance of Paris, L’arlesiana in contrast evokes pastoral beauty. First performed in Milan in four acts in 1897, and being revised into three the following year (a Prelude was added in 1937), the opera is famous for helping to establish the career of Enrico Caruso.

The creation is based on Alphonse Daudet’s 1872 play L’Arlésienne, which was itself inspired by a short story from his collection Lettres de mon moulin, and is best known for the incidental music composed by Bizet. Set in rural Provence, it sees the simple country boy Federico infatuated with a woman who never appears in the drama, and is only ever referred to as L’arlesiana. He consequently shuns Vivetta, the goddaughter of his mother Rosa Mamai who is madly in love with him, but when it is revealed that L’arlesiana has been unfaithful with a drover named Metifio this makes him forget her temporarily and plan to marry Vivetta.

Then, however, he is driven to madness as he pictures Metifio carrying L’arlesiana away on a horse, and he ends up climbing to the top of the hayloft and throwing himself out of the window. In this way, he ‘fulfils’ a story that the old shepherd Baldassarre told Federico’s younger brother L’innocente about a little goat who fights with a hungry wolf all night long, only for the goat to collapse and die at the break of dawn.

Although on the surface the story might feel quite slight, in the hands of Cilea, and indeed director Oliver Platt, it feels both moving and believable as it shows how obsession can take hold to such an alarmingly destructive degree. As we watch, we cannot help feeling that every purpose would be served by Federico turning his back on L’arlesiana, who it seems is not capable of being faithful anyway, and loving Vivetta, because this would ultimately please him, her and all of his family. Federico knows this as much as anyone, which is why he tries so hard to be happy with what he has, and also why he finds it so painful when he is still unable to forget.

Cilea’s music, which includes some beautiful writing for wind, contrasts sweet ‘rustic’ strains with more highly charged and tempestuous moments. Along the way, we hear the horns sound as if they are laughing at Federico as he realises the truth about L’arlesiana’s infidelity at the end of Act I, while the foreboding Prelude to Act III, with its emphasis on thundering timpani, gives way to a more jovial celebration at the point at which it looks as if Federico will be happy with Vivetta.

Alyson Cummins’ set is highly effective as it represents Rosa Mamai’s farmyard, putting the door to the farmhouse centre stage and seeing various low stone walls hint at other buildings. The hayloft is also visible from start to finish so that, as soon as L’innocente has a ‘near miss’ at its summit in Act I, it stands as a constant reminder of where this story is likely to end. Various ploughs, wheels and barrels lie all around, highlighting the dilapidated state of the farm, but also enabling scene changes to be hinted at, simply by placing these objects in different places for the various acts.

The cast is very strong, with Samuel Sakker’s excellent tenor enabling Federico’s pain and anguish to be felt at every stage, particularly in his iconic aria ‘È la solita storia del pastore’. He also plunges to his death in a manner that any Tosca would be proud to achieve. The dynamics across the cast are astutely rendered so that one senses how Federico’s family genuinely loves him, but also how their expressions of this in Act II are tinged with the knowledge that they need to pacify and flatter someone who is ultimately being difficult. In this respect, Keel Watson, with his tremendous bass-baritone, proves a particularly sensitive Baldassarre, while Samantha Price, with her sweet soprano, gives L’innocente the right impression of being all knowing in a virtuous sense.

Yvonne Howard brings her full and feeling mezzo-soprano to the fore to present an extremely concerned and frequently hurt Rosa Mamai, and her performance of ‘Esser madre è un inferno’ is an undoubted highlight of the evening. Fflur Wynn sings Vivetta beautifully, which only makes us want to see her and Federico happy together even more, while James Cleverton is effective in the small role of Rosa Mamai’s brother Marco.

Simon Wilding, who recently played Fafner in Das Rheingold for Longborough Festival Opera, proves a highly intriguing Metifio. His bass is strong and secure, and he makes the character out to be Federico’s shadow or nemesis in every conceivable way. It transpires in Act III that, while he is completely aware of L’arlesiana’s less than honourable ways, he is going to delight in them, and carry out his own distasteful deeds in order to have her. It is this that finally pushes Federico to the brink, and the interaction between the pair is highly charged as Federico’s reaction is extreme because he is so mortified, while Metifio is still almost able to laugh his rival’s behaviour off as being trivial.

The Prelude to Act III sees L’arlesiana appear as a silent presence, with her exaggerated gestures as she drinks and smokes highlighting her allure. However, it is questionable whether it works to see her at all because no reality could ever match Federico’s image of her, and so it is surely better to leave us with the latter. Seeing her first also undercuts what we then learn about her in Act III, even if it could be argued that what we see only represents the ideal, which is quite different from what Metifio then tells us is the truth. Nevertheless, with some superb conducting from Dane Lam, and a chorus who capture the sense of a community when onstage yet sound like angels from off it, this production hits the mark many more times than it misses it.