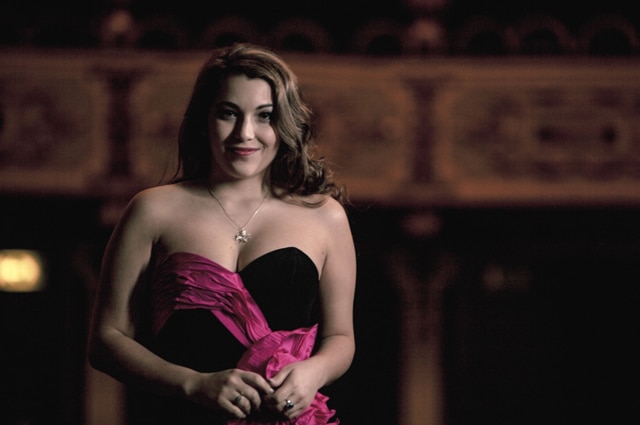 Ermanno Wolf-Ferrari’s Le donne curiose of 1903 is generally seen as a rather whimsical opera, but in the hands of the Guildhall School of Music and Drama we are given a clear insight into just how clever it really is. Set in eighteenth century Venice, it sees several men retire on a regular basis to a club that women are forbidden to enter. This leads their respective wives and lovers to become obsessed with what happens there, speculating that the club is full of gambling, girls, alchemy experiments or plans to gain treasure, and resolving to enter it at all costs.

In reality, it is simply a place of escape for the men although that does not make them any less obsessive than the women in the matter. The club’s owner Pantalone has grown so determined that no lady should set foot in the establishment that he has convinced himself that civilisation would collapse if one ever did. The story has a happy ending, however, when the women finally gain access only to discover the gents enjoying a slap-up meal. The men in turn realise that this trespass has not caused the sky to fall in, and all are reconciled in a moment of joy.

Stephen Barlow’s production sets the action in the 1970s, which feels pertinent because it was only in 1975 that the British Conservative Party changed its rules to allow women to ascend certain staircases, following the election of Margaret Thatcher as leader. The Overture is accompanied by screen credits, courtesy of Dom Baker, that present the opera as if it was an airing of Dallas or Dynasty, with each act then being presented as the next ‘episodio’ of the soap. Very cleverly, the iconic Thames Television logo is altered to become an image of St Mark’s campanile and the Grand Canal.

Yannis Thavoris’ sets are works of art in their own right as they sport seventies colours, patterns and décor while also being immensely detailed. The front to the club is a souvenir shop, complete with postcards, Venetian masks, fans and replica gondolier costumes, while the final spinning of the set so that we move with the women as they tumble from one room to another epitomises the slickness demonstrated throughout the evening.

Best of all, however, are the performances, which highlight Wolf-Ferrari’s wit in employing every operatic device in the book. As Rosaura, the youngest of the women, tries to persuade her boyfriend Florindo never to go to the club again, and to surrender his key, it feels akin to Aida and Amonasro’s interaction. Aida is torn between her private love for Radamès and her public duty to her country in the same way as Florindo’s desire to please Rosaura is at odds with his sense of responsibility towards his fellow men. The joke is that this dilemma is somewhat trivial in comparison with Aida’s, but the scenario is only humorous if it is handed the same sense of monumentality by being played straight down the board. This is exactly what Nicola Said, with her sweet yet full soprano, and Thomas Atkins, with his broad and expansive tenor instrument, do.

Elsewhere, Pantalone’s sidekick Arlecchino wills the women to leave the club in the same way as Figaro encourages Rosina and Almaviva to escape quickly down the ladder. Similarly, the very act of entering the club feels like a parody of other operas’ voyages of bravery or self-discovery such as the entering of the cave in Salieri’s La grotta di Trofonio, the journeys through fire and water in Die Zauberflöte or the ascent of the spiral staircase in The Midsummer Marriage.

Said and Atkins are splendid, but the real revelation proves to be just how strong the entire cast is in both singing and acting. Milan Siljanov as the put upon Arlecchino has a rich and powerful bass-baritone, while Bethan Langford’s excellent mezzo-soprano voice is complemented by astute gestures as she reveals Beatrice’s impatience by kneading dough and chopping vegetables in time with the music. Josep-Ramon Olivé as Pantalone, Dominick Felix, Christopher Cull and David Ireland as the men Leandro, Lelio and Ottavio, and Jennifer Witton and Katarzyna Balejko as the women Eleonora and Colombina, all play their parts with prowess and aplomb.

One automatically expects high standards from opera produced by the Guildhall School, the Royal Academy of Music and the Royal College of Music. Even allowing for this, however, the singing, acting, orchestral playing (under the baton of Mark Shanahan) and staging are all noteworthy. One senses that in the wrong pair of hands Le donne curiose could go down like a lead balloon, but here it rises to seemingly limitless heights.

Casts vary over the run. For further details visit the Guildhall School of Music and Drama website.