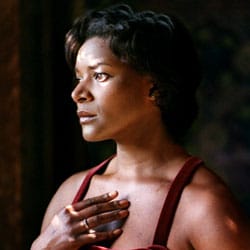 Le nozze de Figaro may be an opera of four Acts, but Liam Steels new production for Opera Holland Park is very much an evening of two halves. In the first, all of the right elements are in place, but the overall effect is merely reasonable. In the second half everything rises to another level entirely.

Steel sets the action in Britain in 1912, with Emma Wee’s set proving highly effective. Two colonnaded galleries jut out from the genuine portico that forms the permanent backdrop to OHP’s stage. The doors in each reveal access to the Count’s chambers on one side and the Countess’ on the other, and provide a host of entrances to dart in and out of, and closets to hide in.

The staging is dynamic from the outset, as even the Overture is accompanied by servants scurrying around after their masters, the sense of pandemonium being countered by some tightly choreographed head turns and movements. After this, almost every scene involves them as they support the broken chairs and mantelpieces (almost the only props ever to grace the stage) that signify broken relationships. When Antonio complains that someone jumped from the window they brandish flower pots, while in Act II’s Finale they place picture frames over the principals hinting at the restricted nature of their lives, or more simply that they will be framed.

Given that this type of dynamic staging is entirely appropriate for Figaro, the question is why the first half does not work better. It seems partly because everything is set up to be so highly charged that there exists no room for visual dynamic variation. The production never sags, but when everything is sustained at such a frenetic level, the overall effect is no greater than if it had all been maintained at a slower pace. This combines with the fact that several cast members take time to warm up and make their presence felt in the large tented area. Some are strong from the start, but any elements that exceed the general level set are countered by those that fall just short of it, making the whole of the first half feel reasonably engaging but nothing more.

Two performances stand out from start to finish. The first comes from Elizabeth Llewellyn as the Countess whose performance of Porgi, amor is an undoubted highlight of the evening. There is a wonderful sense of style in her delivery, which sees her stand as a goddess, eternally elegant of bearing. At the same time, she conveys immense human emotion, her fragility being so obvious that one senses she could physically disintegrate at any moment. The other comes from Hannah Pedley as Cherubino, who carries a dreamy sense of innocent love in Non so pi before revealing tender understanding in Voi che sapete. There is humour too, as she is stripped down to be redressed in khaki, and really manages to make herself look like a man who feels awkward and unconvincing dressed as a woman!

The evening grows, however, as the principals as a whole come into their own. They develop gradually so that Act II’s Finale really hits us as they confront us in a straight line, tumbling out of formation only to fall back in again moments later. Nevertheless, the interval still represents something of a watershed. In the first half George von Bergen as the Count proves a strong singer, but there is something rather rigid in his gestures, and the reasons for his marital weariness feel assumed rather than explored. In Act III, however, he delivers a storming performance of Vedr mentr’io sospiro, shaking sugar everywhere in rage as he attempts to pour himself a cup of tea. Similarly, Matthew Hargreaves, who initially lacked the presence of a Figaro, also comes into his own with some stirring singing. Llewellyn repeats the magic with Dove sono, while Jane Harrington is an effective Susanna, having only replaced Claire Meghnagi a week before opening night. She comes across as quite a strong minded lady, whose determination not to shy away from the challenges is motivated as much by a sense of moral duty towards the Countess as her own needs.

In the pit, Mathew Willis delivers a slick account of Mozart’s score. It isn’t excessively flashy or overcharged, and Willis makes no attempt to wring out every last ounce of beauty from the music. It proves entirely unnecessary to do so. By concentrating on balance, tone and pace, the intricacies inherent in it naturally shine through of their own accord.

Appropriately enough, by the final night time scene it is dark outside, and Colin Grenfell’s lighting shines mysteriously through the stages arches. It is effectively executed as the cast members don masks and animal heads and jump in and out of free standing screens that can all too easily collapse around them. It keeps the pace going right until the end, and with the cast performing at the top of their game, quite simply oozes quality in abundance.