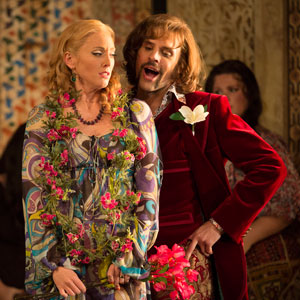 While he shifts the period forward some two hundred years after the opera was written, Michael Grandage maintains its setting in Andalucia but at the end of Franco’s regime, rather than the ancien regime of Beaumarchais’ original story: he still manages to remain faithful to the plot with clarity and purpose. At some levels they behave as equals, but while aristocratic hierarchy and sense of social place are the hinge of the contemporary Beaumarchais plot, Grandage defines the characters here so sharply and observes their relationships, their alliances, deceptions and enlightenments so acutely, that little of this is diminished.

For we are now in Spain in the Swinging Sixties — just about to emerge from the fascist control and long established social attitudes under the old dictator Franco into its decade of economic spring, with the excitement of hippy glamour, free love — for some, and the beautiful people. And what a joy these beautiful people of Glyndebourne on Tour are, the principals magnificently filling the characters of the better-known earlier cast. Many of the cast have come through Glyndebourne’s own training programme or been promoted from the chorus and they perform with a real sense of energy and passion; now half way in to the Tour, settled in and displaying the wonderfully lively theatrical side of this matchless piece of music theatre.

With sets exquisitely designed by Christopher Oram, the Aguas Frescas palace and gardens are the most timelessly beautiful and richly textured setting: a shady, fretted, stuccoed and zilje-tiled Moorish space of gold, dark green and glowing rose, atmospherically lit by Paule Constable.

Guido Loconsolo was a cheeky Figaro, singing strongly and sympathetically, a man of bold intention but without the supreme knowingness one sometimes sees, hitting just the right note of bemused bravado. Joèlle Harvey as his perceptively shrewd fiancée Susanna was a delight, really sparkling in her pert Lyons Corner Shop waitress uniform, and singing with self-assurance and deft maturity. Her Act III duet with the Countess was perfection.

The mellifluous John Moore, in flares and velvet, is a dominant presence, vocally and physically as the plot takes focus, every inch the cocky Count Almaviva, but transformed when thwarted, as the slick Act II farce gathers momentum, into a bad-tempered playboy who seemingly has no real emotional interest in his wife, even in repentance at the end of the opera.

Kathryn Rudge displays excellent talent, for acting, singing and general stage-stealing as the mischievous, puckish and hormonal Cherubino. The earthy Mozart would surely have relished the Count’s reference to Cherubino — at least in the trendily joyous surtitles – as a “randy sod”, but her two main arias were superb, perfectly paced and deftly accompanied. She has all the legato qualities needed for the sensuous side of Cherubino and a very good sense of timing and vocal attack.

The Canadian Layla Claire gave a supreme performance as the Countess. Her stunning arias were creamily yet clearly phrased for maximum pathos and sung with great conviction. Her glorious dark-voiced purity of tone was complemented by body language and glances that perfectly expressed her feelings; she was appealing and touching at all the right times, and her sudden emergence in the final scene was a great moment.

Ellie Laugharne as Barbarina sang and acted very prettily. Those splendidly witty old-timers Andrew Slater as Bartolo, Jean Rigby as Marcellina and Daniel Norman as a gyratingly entertaining Don Basilio provided maturity of years to balance the cast. Jean Rigby was in fine voice and acted as a splendid foil to Susanna and when she and Slater joined the main principals in the great sextet of recognition in Act III there was wonderful interaction and real humour.

Conductor Jonathan Cohen favoured swift tempi which contributed to the general feeling of energy, but he drew wonderfully accomplished playing from the orchestra and a terrific sense of ensemble onstage. The rapport between stage and pit and balance between voices and orchestra were exemplary. Ashok Gupta provided accomplished continuo on the fortepiano. This is a very good show indeed.