by Keith McDonnell
published: 1 May 2010 in Opera and Classical Reviews
Tweet 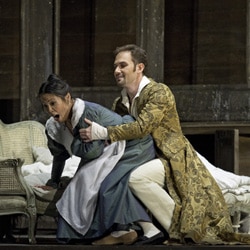 Revolution is in the air as David McVicar returns to The Royal Opera to direct his brilliantly-observed staging of Mozart’s Le nozze di Figaro. With Colin Davis in the pit and an outstanding Figaro and Count on stage this had all the makings of a vintage revival, so it’s a shame that the leading female roles weren’t cast from strength.

There was much to admire in The Royal Opera’s second revival of David McVicar’s acutely-observed staging of Le nozze di Figaro. McVicar had returned to direct, and it showed as every character was alive to the nuances of the text and he drew brilliantly-etched portrayals from the entire cast.

The last act had been completely re-thought and worked much better than last time round, the twists and turns of the plot being far easier to follow. By updating the action to the 1830s, a sense of old worlds crumbling, aided and abetted by revolutionary fervour, is palpable. Figaro is a dangerous opera and was in itself revolutionary as not only were its characters instantly recognisable as ‘real’ people but Mozart made the orchestra into one of the opera’s most prominent protagonists something that had never done before.

No relationship in the opera typifies this more than that between servant, Figaro, and master, Count Almaviva. When this production was new four years ago Erwin Schrott was a puppy-like Figaro, all floppy hair and smiles but four years on he looks entirely different. He’s a leaner, meaner Figaro this time round as not only has he lost a considerable amount of weight and bulked up, but his closely-cropped hair gives him a totally different stage persona than before, thus making his portrayal of Figaro far more subversive. He’s like a coiled spring, his pent up frustration likely to boil over at any point, especially in his dealings with the Count. Schrott’s voice has also darkened in the intervening years, and he sings the role gloriously from start to finish.

Similarly, Mariusz Kwiecień not only cuts a dashing figure as the Count but sings with tireless ease throughout, his Act 3 aria ‘Vedr, mentr’io sospiro’ rightly winning the loudest ovation of the night. Not only does he possess one of the most distinguished and attractive voices around today, but he is a consummate stage animal, positively oozing sexual allure and melting all hearts with a moving reconciliation with the Countess at the close of the opera.

If only the ladies had been of the same standard. Jette Parker Young Artist Eri Nakamura was singing the role of Susanna for the first time at Covent Garden, and although she has a winning stage presence encountered pitch problems to begin with but rallied to give a glowing account of ‘Deh vieni non tardar’. Nevertheless her voice is on the small side for such a demanding role in this particular House. Annette Dasch was bitterly disappointing as the Countess. True she looked fabulous, but sounded effortful in both her arias, although she did seem more comfortable in the ensembles. She’s due to sing Elsa in Lohengrin at Bayreuth but I think that says more about their dubious casting policy than anything else.

Taking over all the performances as Cherubino after Christine Schafer withdrew, Jurgita Adamonyte was satisfactory but given that this production fielded both Sophie Koch and Anna Bonitatibus in the last revival, this role seemed under-cast this time round. All the supporting roles were excellently taken by a veritable line-up of British troupers including Marie McLaughlin (Marcellina), Robert Lloyd (Bartolo) Peter Hoare (Basilio) and Nicholas Folwell as Antonio.

In the pit Colin Davis drew marvellously detailed playing from the orchestra and his tempi were far from sluggish, although his conducting couldn’t efface memories of the energy that Charles Mackerras brought to proceedings at the last revival and I for one missed the vocal embellishments that the singers employed when Mackerras was conducting.