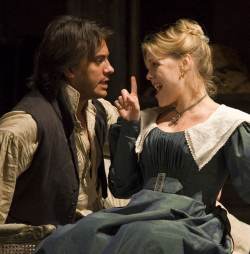 Opera doesn’t get much better than The Marriage of Figaro.

The score is probably Mozart’s finest for the stage, full of comedy, romance, envy, joy and bitterness, not to mention all those memorable tunes.

But it takes a really fine musical performance, and a sensitive production, to make it come off.

And to salute the composer in his 250th anniversary year, the Royal Opera has come up with a gem of a new production, with David McVicar showing once more his intelligence and insight into Mozart after his memorable The Magic Flute for the company a few years back. Indeed, I think it’s his best for the House, matching his magnificent La clemenza di Tito for ENO last year, and it’s easily the best new production the ROH has put on in the last twelve months.

From the word go, it was a gripping experience. Tanya McCallin‘s designs are extremely handsome, and of particular delight was the evocative lighting by Paule Constable, especially in the moonlit final scene.

McVicar updates the opera to 1830, setting it in a Regency period chateau. There is a restrained romance about the production which even the most hard-hearted of critics could surely not fail to be moved by. The overture is accompanied by onstage business, which at once foreshadows the production’s rigorous depiction of the stratified society of the court of Count Almaviva. A sumptuous long gallery is lined with windows, light casting down on the floor. Figaro and Susanna’s bedroom then moves smoothly onto the stage, and is again full of detail: the bed drops down from the wall, shelves lie empty, waiting for the newlyweds to move in together. The Countess’ bedroom is similarly evocative, whilst the final set revolves from the interior to the exterior of a veranda; trees and falling leaves make the backdrop for the reversal of characters between Susanna and the Countess in the final scene when the Count is duped into submission.

The finesse of the sets is such that this is guaranteed to become a classic production. Equally legendary is the conducting of Antonio Pappano, which was his finest at the House to date, in my opinion. The orchestra was immaculately prepared, finely phrased and accompanying with sensitivity, and the conductor himself also played the recitatives on the harpsichord (a real homage to Mozart’s performance practice).

The cast was also excellent, if slightly undistinguished in some cases. The role of Count Almaviva was surely made for Gerald Finley. His rendition of the Act 3 aria brought the house down, strongly projected and delivered with an aristocratic authority. His long-suffering wife was sung by Dorothea Rschmann. Everything she sang was deeply felt, but for me the easy legato that is so essential in this music was lacking in her upper register; these factors made Dove sono moving but slightly unconvincing.

Erwin Schrott was a superb Figaro, a real lyric baritone with a feel for the humour and the heart of this character. ROH debutant Miah Persson stunned as Susanna, producing spine-tingling half-tones in Deh vieni, non tardar. She carried off her character’s stage-managing the events of the whole opera, and had a beautiful, if small voice, and a nice ringing tone.

Rinat Shaham took a while to warm up as Cherubino, but was cheeky and charming; Graciela Araya a witty Marcellina; and Philip Langridge was luxury casting as Don Basilio. Barbarina was the lovely Young Artist, Ana James, making a strong impression at the start of Act 4.

The great news is that the BBC are televising the production during Easter, and the first revival is at the ROH in June. I, for one, can’t wait to see it again.