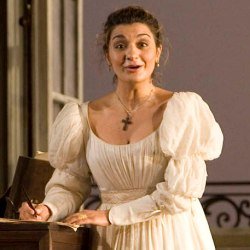 Tanya McCallin and in particular to the warm but unfussy conducting of Sir Colin Davis.

The man’s a miracle: at almost 80 years of age, he maintains the energy of a teenager, and drove a vibrant ROH orchestra and chorus through a fresh and well-paced reading.

Set in a grand but slightly faded chateau in 1830, McVicar’s production (which is here restaged by Stphane Marlot) is alive with business. Maids and manservants cross the stage during the overture, engaging the audience from the first note of music, and they pop up frequently throughout the opera, which is never dull as a result. Exuberance radiated from every single member of the cast, and though there were occasional moments of tempo imbalance between stage and pit in the first act, there was such commitment that it never threatened to mar the performance.

One really gets a sense of the domesticity of the story in this human and witty reading. The servants, Figaro and Susanna, live in a small and run-down room; the Countess has a four-poster bed in her enormous boudoir. The Count’s scientific experiments are highlighted by the instruments in the third act, and the falling leaves and Paul Constable‘s atmospheric lighting give the final act an intimacy and a sense of romance. The vulnerabilities of all the characters come to a head in this final act as well: do the leaves represent the Countess’ loss of her husband’s love? Will Figaro be too suspicious for Susanna? Whilst not overdoing it, McVicar poses numerous questions that lead to new insights into this familiar work.

It’s not hard to tell from the way he conducts Mozart that Colin Davis originally trained as a clarinettist: he brings out the woodwind colours and breathes with every sumptuous line that the composer provides. It seemed that after Antonio Pappano’s minute attention to detail in Tosca, the orchestra was glad to let rip with more energy under Davis; the strings were warm and had a vigorous attack.

Of the singers, the Finnish soprano Soile Isokoski put in the most impressive performance, as Countess Almaviva. Even if Porgi amor was a little tentative, she more than made up for in the Act 2 finale, while Dove sono was the best performance of the night, confidently sung by an artist with the vocal range, depth of tone and pathos to carry it. Michael Volle may be less aristocratic than Gerald Finley was in the role of the Count in January, but he was considerably more dynamic.

Kyle Ketelsen was an excellent Figaro, full of life and charm. His voice has a very natural, unforced quality, and his precision was ideal for Mozart. Sadly, Isabel Bayrakdarian spoiled her performance as Susanna with a indifferent rendition of Deh vieni, non tardar, and in general lacked the tone colours that Mozart demands, but she was a bubbly figure on stage and excelled in the ensembles.

The starry casting included Robert Lloyd as a lecherous but cunning Bartolo, Diana Montague as an outstanding Marcellina, and Jeremy White as a side-splitting Antonio. As in January, Young Artist Ana James as Barbarina upstaged her lover Cherubino. Sophie Koch was far too feminine in the latter role, and sang sharp in many of her lines.

Yet there was a coherence of purpose about the evening, a sense of joy coming from the cast and conductor, that made it a memorable night. The performance on 28 June is to be broadcast live to the big screens around the country: be there!