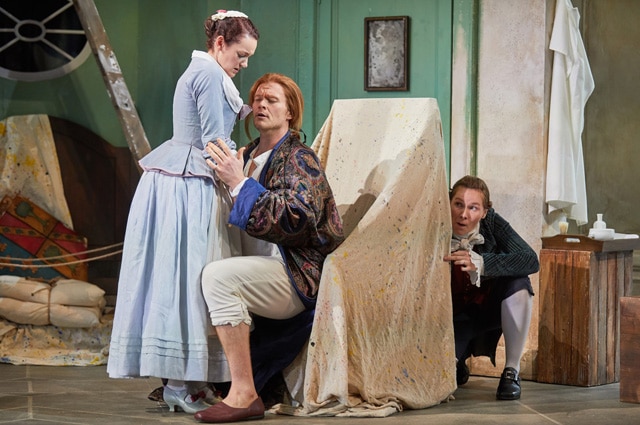 Who are these dangerous subversives, setting Mozart’s bittersweet comedy in the century in which it was written, with sets and costumes bereft of barbed wire, fatigues and mobile phones – why, they have not even dragged it inexplicably into the late-ish twentieth century so that the women may totter on platform heels and the men sport dubious moustaches! Why is there no wholly unnecessary declaration that the aim was to ‘highlight the class structure’ – one might almost imagine that such an aim was already present in Beaumarchais’ play and Mozart’s music! Step forward, John Cox and Bruno Ravella, respectively director of the original 2005 production and Associate Director – such naughty chaps, to take as their model the lines Peter Shaffer’s Mozart utters in Amadeus – “…to combine the inner minds of him and him, and her and her… and turn the audience into God.’

And how this audience loved it, relishing Robert Perdziola’s finely detailed sets – an actual garden!  A real boudoir! ‘Pini’ under which even a tall chap could be sotto, as opposed to a couple of cacti which could not even hide a puppy! A total absence of vulgar intrusion, thought and love spent instead on characterization and singing. And how finely that was done, from the most minor characters – Hollie-Anne Bangham and Hazel McBain’s delightfully knowing bridesmaids – to the major ones – Duncan Rock’s imperious, superbly sung Count.

Has either Timothy Robinson or Janis Kelly ever failed to inhabit a role to such a degree that it’s impossible to imagine it being bettered? Unlikely, if their Basilio and Marcellina here are anything to go by. Robinson’s suave, caustic, impeccably sung music master and Kelly’s hilarious, persuasive housekeeper are absolute classics, and they form the perfect trio with Stephen Richardson’s sonorous Bartolo. The ‘fruit’ of the ‘old love’ in the shape of Joshua Bloom’s Figaro is equally definitive; he’s just lovable enough, just daft enough, to make you sympathize with his character, and his singing is first rate – angrily blustering without losing the line in ‘Se vuol ballare’ and ‘Aprite un po’ quegli occhi’ and mellifluous in ensemble.

Duncan Rock is equally impressive, his Almaviva an arrogant yet vulnerable character, a convincing silver-tongued seducer with a brutal side; his aria was the high point it ought to be but so often is not, and his duet with Susanna an absolute joy. It will have come as no surprise to those who heard her impassioned Marzelline in this house’s 2014 Fidelio, that Jennifer France has everything a Susanna needs, from charming presence to musical phrasing and silvery tone. She was a little nervously unsteady at times in her big aria, but she still kept bringing Barbara Bonney to mind, and that is no small achievement. 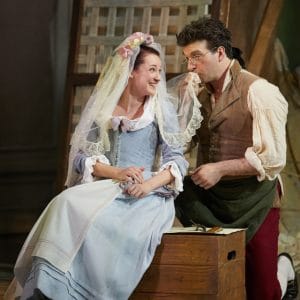 Marta Fontanals-Simmons must be the most convincing Cherubino around – her biography photo in the programme shows a beautiful girl, but so persuasive is her characterization here that you really can see this impetuous, randy youngster as a boy. Both her arias were beautifully done, full of warmth and tenderness – the best Cherubino we’ve heard in a long while.

The Canadian soprano Kirsten MacKinnon was making her UK debut in the role of the Countess, and it was an impressive one. She has just the right blend of aristocratic hauteur and gentle vulnerability to make her portrayal a convincing one, and she sang with assured grace and supple phrasing both in her arias and her duet with Susanna.

Andrew Tipple was a gloriously daft Antonio, and Alun Rhys-Jones an incisive Don Curzio. Alison Rose made a strong impression as Barbarina; it won’t be long before this winner of the Maggie Teyte prize is singing Susanna. The Chorus, superbly trained by Susanna Stranders, was a joy in every one of its scenes, but especially in those featuring the sardonic ‘maidens.’

Douglas Boyd conducted a wonderfully vibrant, elegant, sparkling account of the score, with witty continuo from Andrew Smith and Helena Binney. Like all the best productions of the work, this one reminds us once more that, in Peter Shaffer’s words, “The disguises of opera had been invented for Mozart.”