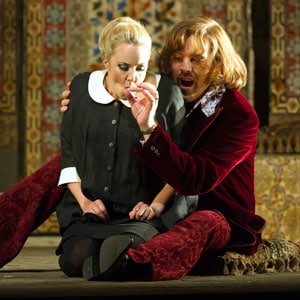 There were some great voices and interpretations onstage at Glyndebourne’s new production of Le nozze di Figaro — unfortunately none of them belonged to the principals. Alan Oke’s Don Basilio, Andrew Shore’s Bartolo, Anne Murray’s Marcellina and Colin Judson’s Don Curzio, all outshone Audun Iversen’s Count (aka Disco Stu), Vito Priante’s Figaro (Adrien Brody on a gap year), Lydia Teuscher’s Susanna, Sally Matthews’ Countess and Isabel Leonard’s Cherubino. There was nothing wrong with the singing of the last five; they were just not very remarkable, or to put it more frankly, not really festival standard.

The same was true of the playing. The OAE sounded tired, as though at the end of the run and not the beginning, and Robin Ticciati’s direction was very careful, plodding and 100% sparkle-free. It was at its best in the grand finale, lovingly shaping the music around the Count’s plea for forgiveness, and at its least appealing in the dance music; the lack of verve there, however, was possibly due to an enforced tempo in order to allow the Pan’s People chorus to do some kind of 70s version of the twist.

Christopher Oram’s set would have looked wonderful as the backdrop for a production of Die Entführing aus dem Serail, and the costumes were Abigail’s Party revived. Paule Constable’s lighting was, as expected, limpidly beautiful. I’d place the period at around 1969-1972, although much of the apparel was standard opera spear (or flower) carrier circa just about whenever. It all seemed rather lazy, with even the ‘Sua madre’ and final ‘discoveries’ a bit flat; as for the setting of the latter, it was more ‘sotto il cacti’ than ‘sotto il pini’ although the Alhambra-style pond did provide amusement as one wondered who might fall in.

After Michael Grandage’s superb production of Billy Budd here two years ago, this Figaro was much anticipated, but it did not live up to expectations. The audience applauded warmly — after all, this is a work of such genius that even a fairly pedestrian production reminds us that, as Peter Shaffer put it, “The disguises of opera had been invented for Mozart… The final reconciliation melted sight.” And so it did.