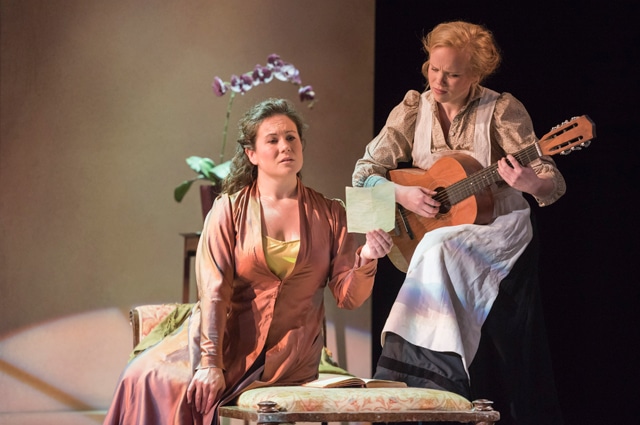 When director Thomas Guthrie and designer Rhiannon Newman Brown were seeking inspiration for their new production of Le nozze di Figaro for Longborough Festival Opera they did not need to look very far. Just a mile down the road from the venue is Sezincote House, which was built at the end of the eighteenth century and feels vaguely reminiscent of Brighton Pavilion. To utilise such a local feature seemed perfect, and Guthrie decided to set the action in 1910 for one simple reason: as in the 1780s, Europe was then on the verge of tremendous changes that would challenge the very hierarchies that formed the basis of society.

The Overture sees servants scuttle around, and an exceptionally well behaved dog keep still, as the Count prepares to go hunting. The stage has been opened up to its full depth, revealing its bare black wings and walls. Just a few props lie upon it, with arches recalling the architecture of Sezincote, and Act IV’s garden scene placing a model of the house in the distance.

When we see a rail of costumes take centre-stage, it looks as if a Brechtian staging is to be played out, and in the Countess’ bedroom in Act II it almost is. All of the doors are merely wooden frames with nothing inside, so that the performers have to mime locking and unlocking them. Here the clothes rail is placed within the closet as we see Cherubino reacting to everything he hears the Count say, and desperately changes from his female clothes into his uniform. A window frame even has to descend especially in order for him to jump through it! 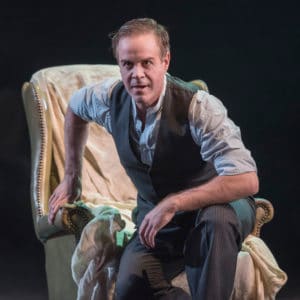 Much of the direction is thoughtful and dynamic, but it can also go off the boil as momentum and sharpness are not always maintained. For example, ‘Voi che sapete’ is rendered very well as Anna Harvey’s Cherubino sings the first half of it in the abstract before directing the second half specifically towards the Countess. The Countess’ feelings for him are revealed in turn by her entrancement with the song, and the quiet excitement she shows when his trousers are removed as he dresses as a girl. On the other hand, arias such as Doctor Bartolo’s ‘La vendetta’ and the Count’s ‘Vedrò, mentr’io sospiro’ are marred by displaying little sense of direction so that the characters are more or less left to sing to us. Fortunately, both performers succeed in engaging us with their presence, but it seems odd that Bartolo (Eric Roberts) should be handicapped by having to grip a luggage trunk under his arm for virtually the entire aria. There are other places, however, where such a ‘minimalist’ approach works better such as in ‘Porgi, amor’. A few servants move about, but essentially the Countess sings the aria as she slowly advances towards us. With Susanna Fairbairn’s sensitive yet sufficiently weighty voice coming to the fore, this is all that is needed.

Robert Houssart conducts well and the singing is generally of a high standard, with Grant Doyle as Figaro revealing a powerful and rounded baritone. As Susanna, Beate Mordal displays a sweet soprano and if sometimes a little more volume and nuance would be welcome, her performance of ‘Deh vieni, non tardar’ is especially moving. However, Doyle plays Figaro as a rather straight and controlling figure, and when he has to wrestle an angry Susanna away from Marcellina (Wendy Dawn Thompson) at the end of Act II one wonders if relatively speaking the characters have been put the wrong way around. Surely, it is Figaro who should have the blustery swagger while the spirited Susanna quietly and effectively goes about getting the job done.

Anna Harvey reveals a beautiful and rich mezzo-soprano as Cherubino and it is interesting to see how she has developed playing the part of a boy since taking the same role for West Green House Opera last year. She may be aided by a different haircut and clothes, but her shoulder carriage has been worked on so that it now looks far more masculine. As the Count, Benjamin Bevan reveals excellent tone and at his best asserts his baritone very powerfully, although it does not prove consistently strong throughout the evening. Lucy Knight as Barbarina sings ‘L’ho perduta, me meschina’ beautifully, while Harry Nicoll is excellent as Don Basilio, combining a certain obliviousness to the machinations of others with a mischievous glint in his eye.

The problematic ending in which the Count asks for forgiveness and the Countess immediately grants it is also tackled well. The crucial moment is followed by the pair quietly staring at each other while everyone else celebrates and casts an eye in his direction. One senses that this Count may actually change his ways, but only because he knows that from now on everyone will be looking at him wherever he goes.

Longborough Festival Opera’s 2016 season continues until 2 August, with one further performance of Alcina taking place in London on 4 August. For details of all events read our preview.