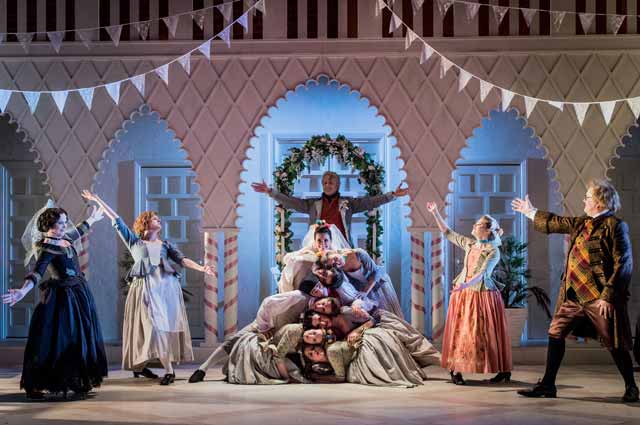 These are exciting times for Nevill Holt Opera. This season sees the opening of its new 400-seat opera house, installed inside an historic stable block courtyard. The design, by RIBA Stirling Prize winning architects Witherford Watson Mann in conjunction with theatre designers Sound Space Vision, is especially intelligent as the exterior of the building appears entirely unaltered. This, as much as anything, ensures that, upon entering, the intimate, aesthetically pleasing and acoustically excellent interior comes as the most delightful of surprises. This year also marks the beginning of orchestral partnerships with the Britten Sinfonia and Royal Northern Sinfonia, and it is the latter, conducted superbly by Nicholas Chalmers, that plays for the opening production in the 2018 season, Le nozze di Figaro.

Joe Austin’s period production uses many up and coming singers, and generally proves to be as polished as it is dynamic. Simon Kenny’s set consists of a row of arches, which allows for all of the necessary entrances and exits, and ensures versatility as they can be pushed into a variety of positions to create different areas. For example, in Act II they form the Countess’ apartment by presenting two walls at right angles, with doors in the arches enabling Susanna and Cherubino to hide behind them out of sight. Once the infrastructure is in place for each act it remains largely static, but the dynamism is maintained by utilising the chorus to good effect. For example, in Act I they dance a routine as they sing their thanks to the Count for having abolished the droit de seigneur. Similarly, towards the end of ‘Non più andrai’ Cherubino assembles the servants so that they can all march to the music as if setting off for war.

Act III involves several scenes and this production overcomes the difficulties presented by this by creating a single catch-all area and ‘overlapping’ events. In this way, Figaro, Marcellina (Joan Rodgers) and Doctor Bartolo (Stephen Richardson) sit eyeing each other up, in preparation for the following scene, even while the Count sings ‘Vedrò, mentr’io sospiro’. The wedding is extremely dynamic and even includes chorus members recreating the iconic image from Bronislava Nijinska’s choreography for Stravinsky’s Les Noces of 1923, in which here seven people lock their heads together horizontally, while an eighth (Susanna) rests hers on the top to form a pyramid. The momentum is then maintained into Act IV by having drunken revellers stagger about during the scene change, raucously singing parts of the Overture a capella. 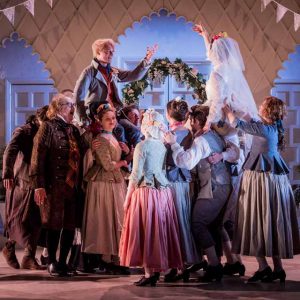 There are a host of excellent touches such as Figaro ushering on a garlanded arch for the wedding ceremony in both Acts I and II to keep us focused on the idea that all he and Susanna wish to do is get on and be married. When Barbarina (Rowan Pierce) loses the pin, normally Figaro finds it and returns it to her, but here he simply whips one from Marcellina’s hair and fools Barbarina into thinking it is the ‘correct’ one. This is clever because it seems implausible that he would instantly find something that she had been spending some time looking for, and emphasises how Figaro is going out of his way to help Barbarina in order to extract information from her.

Act IV cleverly lines characters up to watch the action from the sides of the stage so that by the end Marcellina, Barbarina and Cherubino are all huddled in the same corner to witness the final exposing of the Count. Prior to this Barbarina sees Cherubino trying to crack on to the Countess when she is disguised as Susanna, although after subsequently reprimanding him they kiss and make up rather quickly! The timing shown when the Count takes a swipe at Cherubino in the dark, only for the boy to duck and Figaro to take the full blow, is far better than that to be found in the vast majority of productions. The final tableau is also very effective as each of the couples that have formed adopt a different pose within one of the four arches that by now run along the front of the stage.

From among the strong cast, James Newby stands out. With his firm baritone, he presents a Count who on the surface appears so young, dashing and upstanding that it is immensely disconcerting to see just how easily he can become sinister and brutish. Lawson Anderson with his excellent bass-baritone and Aoife Miskelly with her beautiful soprano work very well together as Figaro and Susanna. Anderson presents all of the blustery swagger of a man who takes pride in being a cunning trickster, and who revels more perhaps in digging himself out of difficult situations than in ensuring he does not put himself in them to begin with. In direct contrast, Miskelly, with some astutely observed gestures, reveals how Susanna simply and quietly goes about getting the job done. What comes across most clearly is just how much they actually love each other, as illustrated by the delight on Figaro’s face in Act IV even as Susanna scolds him, because what matters to him is that he knows the woman he loves is true.

Anna Harvey, who also played Cherubino for West Green House Opera in 2015 and Longborough Festival Opera in 2016, is splendid, with her performance of ‘Voi che sapete’ being particularly fine. It is aided by enabling Harvey simply to feel its emotions, free from superfluous gestures that can cheapen so many performances, as if this is the one moment when the cheeky, flirtatious boy does reveal his sensitivity and innermost feelings. Sky Ingram, who sings ‘Porgi, amor’ beautifully, achieves the right balance between portraying a Countess who is totally broken (our first sight of her is in bed looking totally withdrawn) and someone who has the strength and determination to succeed in turning her situation around. This also has the effect of making the ending, in which the Count asks for forgiveness and the Countess swiftly grants it, seem less arbitrary and jarring than it often does. This is because we are not left feeling that the Countess had no choice but to forgive one who will not ultimately change, but rather that her winning back the man she loves is her triumph above anything else.

Following the current run, there will be two further performances of Le nozze di Figaro at the Sage Gateshead on 4 and 6 July as part of the Great Exhibition of the North. Nevill Holt Opera’s 2018 season, which also includes a production of Thomas Adès’ Powder Her Face starring Mary Plazas, continues until 30 June. For further details and tickets visit the Nevill Holt Opera website.