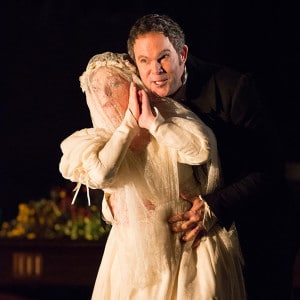 The fifth revival of David McVicar’s production of Le nozze di Figaro, which premiered in 2006 to commemorate the 250th anniversary of Mozart’s birth, features two performers making their first appearances at the Royal Opera House, and several others enjoying role debuts at the venue. This brings freshness to a production (revived here by the movement director Leah Hausman) that proves particularly suited to allowing each performer to put their individual stamp on their part.

McVicar updates the action from the 1780s to 1830s revolution-scarred Europe, with the palace standing in a state of decay. Its plaster-cracked interiors, courtesy of Tanya McCallin, may act as a metaphor for the Count’s own wearying relationship with his wife, but the Spartan furnishings and bare walls suggest that the Almaviva dynasty has imploded and is living on borrowed time. The high walls do not exactly swamp the performers, but there is a sense in which everyone is scuttling around a place that is about to be overwhelmed by outside forces. Such external powers may be represented by the sunlight that floods through the vast windows, in Paule Constable’s lighting designs, the pale yellow hues feeling remarkably realistic. In this way, although there is an element in which Figaro is turning the world upside down as he outwits his master, it may also be that he is an integral part of this traditional set-up and will not so much overthrow it, as fall with it.

The world the Count currently inhabits is certainly rendered in great detail. Servants and maids scuttle around the hall during the Overture, getting up to all sorts of mischief and only up their pace of work when the housekeeper is in sight. They subsequently appear in scenes as they go about their normal business, bringing an extra visual dimension to many occasions and yet never proving excessively distracting. The number of telling details in the principals’ performances is immense, with each introducing new touches as well as applying their own style to actions that have existed in every revival. Just one example is the end of Act I when amidst the tributes being paid to the Count for having abolished the droit de seigneur Barbarina presents him with a basket of fresh vegetables. She flirts with him just enough to keep him onside, but all the while casts a more affectionate eye towards Cherubino and then exchanges harsh words with Antonio as she exits.

Just occasionally the odd innovation proves less effective. Many a production has shown that the moment in Act IV when the Count moves to strike Cherubino, only for him to duck and Figaro to receive the full blow, is immensely difficult to carry off. However, McVicar’s solution to see the Count push Cherubino and then have him in turn crash into Figaro does not quite work because the point should be that the youth avoids being struck at all and hence gets off scot free.

Such quibbles, however, are minor, and if the real joy of this revival is the slick ensemble dynamic, that comes about because the performances are so strong. Stéphane Degout, new to the role of the Count at Covent Garden, and Erwin Schrott, who also played Figaro here in 2006 and 2010, are a good match for each other. Both are highly secure, enabling them to offer nuanced accounts that are also possessed of sufficient power. Degout is good at asserting his bullish nature before being stunned into silence and confusion every time he is thwarted. In this respect, his request suddenly to be forgiven at the end could represent the moment in which is jerked out of his thinking to such a degree that it does result in an instant change in character.

Schrott is equally good at reacting to events around him, and frequently adjusts his voice to emphasise the improvised nature of his utterances. He also interacts well with Anita Hartig’s splendid Susanna, all the while revealing who is ultimately the more intelligent and in control. While Schrott’s actions such as putting a rope around his neck and dancing with boot shapers are large, Hartig’s gestures are smaller and more subtle.

American soprano Ellie Dehn, with her full yet highly sensitive voice, provides a wonderful portrayal of the Countess on her Royal Opera debut. Her emotions are rendered just a little too overtly in ‘Porgi, amor,’ as the aria can work better in conveying someone who has been numbed to the very bone by the Count’s infidelities. ‘Dove sono,’ on the other hand, is pitched perfectly, perhaps because it is an aria in which the Countess is required to show just a little more spirit.

Kate Lindsey is a superb Cherubino who delivers an excellent performance of ‘Voi che sapete,’ completely caught up in dreams of love. Carlo Lepore and Ann Murray are old hands at playing Doctor Bartolo and Marcellina, and the scene in which they discover they are Figaro’s parents is one of many that elicits genuine laughter from the audience. Heather Engebretson, also making her Royal Opera debut, is a superb Barbarina, really making the minor key come to the fore in her beautiful performance of ‘L’ho perduta, me meschina’, while Krystian Adam is strong as Don Basilio. Antonio and Don Curzio are ably played by Jeremy White and Alasdair Elliott respectively.

Ivor Bolton’s conducting helps us to appreciate how the music shapes the humour and dynamics. For example, when Susanna and the Countess tell the Count that he does not deserve forgiveness towards the end of Act II, we witness the musical expression of two being pitted against one. Although Le nozze di Figaro was positively received on its premiere in 1786, its initial run of nine performances still compares unfavourably with Salieri’s La grotta di Trofonio, which appeared seven months earlier and notched up twenty-six. Figaro, however, has enjoyed far greater longevity and this is probably because it is so clever that there is always something new to discover every time one sees it. The same might also be said of David McVicar’s production.

Le nozze di Figaro will be broadcast live to selected cinemas in the UK and worldwide at 6.45pm on 5 October. For details of participating venues visit the Royal Opera House Live Cinema Season website.