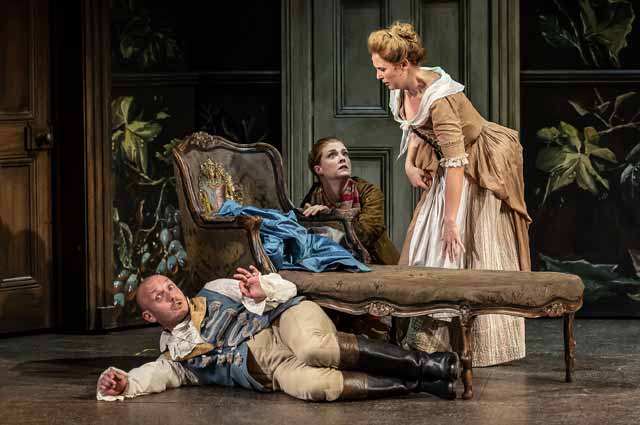 ‘Ah! tutti contenti,…’ the sublime closing chorus following the Countess’ tear-inducing forgiveness of her errant husband, can seldom have sounded more weighted with equivocation, but the words did summarize the reactions of the audience. You would have to be very cynical indeed not to be happy with this production, intelligently conceived by Martin Lloyd-Evans and conducted by Richard Egarr with true Mozartean grace.

What a daring, subversive group we have at the helm here – and the most audacious of them all is the Grange Festival’s Artistic Director Michael Chance, who must take some responsibility for this outrageous production; why, it gives every sign of understanding and respecting the fact that the social and moral climate of the work is already there in Mozart’s music and da Ponte’s libretto! Even more shockingly, it is neither a study in aspic of what an opera ‘should’ look like, nor a total ‘re-working.’ Instead, it is a 21st-century take on a classical piece, re-imagined without recourse to cliché, with beautifully appropriate costumes (Kate Lyons), elegant sets (Tim Reed) and subtly atmospheric lighting (Peter Mumford).

Instead of attempting to make points which do not need highlighting, forcing singers to teeter about on absurd heels, or ludicrous updating in that style suited only to school productions, we see dramatic interactions which steer a fine line between gentle mockery and absolute sincerity, played out against a deliberately ‘classical’ backdrop which at times resembles one of those leafy Caravaggio paintings. Flats are moved on and off with seemingly intentional clunkiness, as if we really were in one of those tiny Georgian theatres, but the whole is slickly done so as to create a very sparse, contemporary ‘feel.’ Great care has been taken to establish characters faithful to the words and music, and to render them both lovable and infuriating as appropriate. Of course that is only possible with judicious casting from the ‘bottom up,’ and this is evident here in every scene. 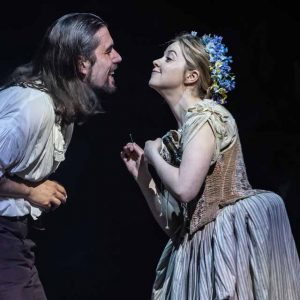 Rowan Pierce, the winner of the Grange’s International Singing Competition, was an outstanding Barbarina – presented as a slovenly servant rather than a cute doll, she gave the characterization her all and sang with lustrous sweetness – it won’t be long before we hear her as Susanna. Having that great singing actor Richard Suart as Antonio is luxury casting indeed, and he must have inspired his younger colleagues with his professionalism and humour. Louise Winter’s beautiful Marcellina, for once youthful enough to be the bride of a Figaro, was a brilliant assumption, as was Ben Johnson’s Basilio – how refreshing to have this character sung by a young artist, and what a fine job he made of it. Jonathan Best’s lugubrious Bartolo completed as fine a ‘minor character’ cast as anyone could wish for.

The major figures have not had the stage experience of the last four, but these were all fine young singers with very promising voices. Simona Mihai’s Countess was a serene yet troubled woman – the part when she reflected upon what Cherubino was singing, was a subtle and moving moment – and she sang both her arias with dramatic edge and poignant phrasing. Quite why the person next to us felt it necessary to converse with his partner in loud tones (as if he were in his own home) whilst this sublime music was being performed is a mystery to some of us. But not to all – “He’s just an a*****e” being the consensus.

That well known a*****e Count Almaviva, was not the usual arrogant lord, in Toby Girling’s unusually sensitive portrayal – this seigneur wants to have his cake and eat it, but he gradually comes to see his own frailty, very finely shown in his aria, which was the real showpiece it should be but so frequently is not. His plea for forgiveness in the final moments was thus all the more poignant.

Ellie Laugharne’s Susanna and Roberto Lorenzi’s Figaro might not quite have equalled the singing of their masters, but both acted with verve and gave touching, well characterized performances of their arias. Wallis Giunta was an outstanding Cherubino, conveying all the impetuousness of youth and giving heady, enraptured performances of both arias. The Grange Festival Chorus sang with gusto and gave slyly funny impersonations of lackeys and rustics.

Richard Egarr kept things moving along in the pit, often emphasizing rhythms in what might almost be called a ‘toe-tapping’ style, and he obtained refined playing from the Academy of Ancient Music, bringing out this orchestra’s well known blend of earthy immediacy and subtle elegance. With a fine cast and a production of rare wit and poignancy, this is one of those occasions which remind us that Le nozze di Figaro is truly one of life’s great operatic experiences.