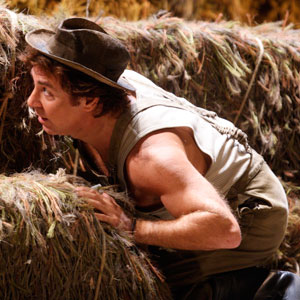 Jonathan Miller’s 2010 production of L’elisir d’amore for English National Opera placed the action in the American Midwest while the Royal Opera employs the more obvious context of Italy, but both set the drama in the 1950s. Productions of many operas, in fact, utilise this period and the reasons why are fairly obvious. The decade is still recent enough to retain a certain air of familiarity, but also sufficiently ‘historical’ to maintain many of the traditional values and hierarchies upon which the works originally played.

This is the second revival at the Royal Opera House of Laurent Pelly’s 2007 production, and, although certain aspects feel rough around the edges, they never seriously undermine its underlying dynamism, or the inherent strength of the performers. Generating a strong sense of the rural, the set is piled high with bales of hay that create a variety of levels upon which to perform the comic arias. ‘Come Paride vezzoso’ sees Belcore come crashing down on the hay in his attempts to woo Adina, and during ‘Chiedi all’aura lusinghiera’ Nemorino throws himself prostrate in front of her Vespa, covers her mouth so he can utter his next line, and attempts to ride pillion behind her.

While the hay bales are in many ways effective, they initially take up so much space that they make the staging feel cluttered and devoid of any real purpose. A parallel point could be made with regards to the choreography. There are moments of pure hilarity such as Dulcamara’s grand entrance being interrupted by a dog running across the stage, the villagers spraying the quack’s miracle cure over every part of their body imaginable, and Nemorino rolling about the floor with a chorus member! At the other end, however, occasions such as the Act I finale fall flat as the chorus simply sway tentatively from side to side before embarking on an exaggerated march across the stage.

The four main roles are taken by highly acclaimed artists, and anything wrong with their performances is far outweighed by what is right. Aleksandra Kurzak, reprising her role from the original 2007 production, is a model Adina who delineates several strands of emotion at every turn. She leads Belcore and Nemorino on, even while irately dismissing them, enjoys the thought that Nemorino is not really over her at all, and similarly cannot stand it when it really appears that he is. Kurzak throws herself physically into the performance, and if there is a slight tendency to overact, she has picked the right opera in which to do so. Vocally, she creates beautifully pure, yet sumptuous, lines, and her performance of ‘Prendi, per me sei libero’ is particularly fine. If on opening night something went momentarily amiss towards the end of Act I, it hardly mattered.

As Belcore, Fabio Capitanucci produces a thick, rich bass-baritone sound that during ‘Come Paride vezzoso’ occasionally seems unfocused, but overall contributes to a sterling performance. Ambrogio Maestri, who was tremendous as Falstaff here in May, now repeats the magic as Dulcamara. Since Miller’s ENO production arrived in 2010, it has been easy for Londoners to see Andrew Shore as the definitive Dulcamara, but Maestri would give him a run for his money, even though it is not a competition because they play the part so differently. Shore, singing in English, delivers ‘Udite, udite, o rustici’ very much like a patter song where the comic delivery of the words overpowers all else. In Pelly’s production, although his enunciation is impeccable, Maestri concentrates on creating a large visual experience as he takes the stage by storm, revealing the wonders of his van step by step. Both Maestri’s physique and performance are large and boisterous, and while his voice might also be seen as such, there is actually a great smoothness and polish within.

One cannot help feeling that Roberto Alagna relies less on in-depth psychological analysis of Nemorino’s character than on his own natural stage talent, but this makes his performance no less effective. Like Kurzak, he throws himself completely into playing the ‘village dunce’, and vocally he is in good shape. Ironically, ‘Una furtiva lagrima’ is the one moment when a slightly lighter, more ethereal sound might have been welcome, which his mature voice is not so suited to providing, but the performance remains tonally strong, vibrant and impeccably phrased. The overall effect of the aria is also enhanced by the pinprick lights that descend from the rafters, and the incredibly beautiful introduction from the bassoon, harp and pizzicato strings. This moment crowns an excellent performance from the Orchestra of the Royal Opera House that is characterised by sumptuous yet precise playing under the baton of Bruno Campanella.