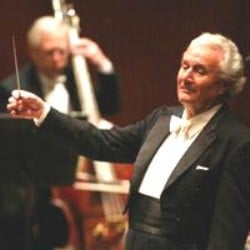 Mesmerising, captivating, spellbinding: Sir Colin Davis’ conducting of the London Symphony Orchestra in Berlioz’s L’enfance du Christ had it all.

Rarely has a composer suited a conductor’s talents so adroitly, as Berlioz does Davis – his long-running Berlioz cycle with the LSO has regularly proved it.

But never before has the composer’s music seemed so spiritual: the chorus’ ghostly final ‘Amen’ seemed to go beyond music and into a divine, mystical moment in time that is beyond rational explanation.

As David Cairns‘ excellent programme note reminded us, this was one of the least planned-out of Berlioz’s works. Usually a composer of big projects, he started by writing the Shepherds’ Farewell chorus and eventually composed three parts to L’enfance du Christ. It describes the events shortly after Christ’s birth: King Herod’s dream of how Jesus will overthrow his power, the Holy Family’s flight into Egypt, and their arrival at the city of Sas.

The composer was at his creative height when writing the piece, and what particularly impressed me in this performance was the neat combination of monologues (especially that of Herod in deepest torture) and breathtaking drama (such as the physical strain of Mary and Joseph going across the desert). Both aspects were ideally realised by Sir Colin and the LSO in their penultimate programme together with him as Principal Conductor.

The role of The Narrator and Centurion was to have been performed by Ian Bostridge but he withdrew due to ill health and was replaced by tenor Yann Beuron. I can’t imagine Bostridge coming anywhere close to Beuron’s achievement in this music: he was ideally lyrical, had easy phrasing and a true sense of the drama. Considering he took over at the last minute, Beuron’s was a remarkably confident performance from the opening bars onwards.

As Marie and Joseph, Karen Cargill and William Dazeley brought the desperate situation of the parents to the fore. Cargill particularly let rip, with a thrilling mezzo tone, but Dazeley was suitably paternal too. Peter Rose was excellent as the Father and Polydorus hugely commanding and well-projected whilst the most imposing solo vocal performance of the evening came from Matthew Rose. A former Young Artist of the Royal Opera, Rose is maturing into an accomplished singer who is both technically assured from the vocal point of view and has an arresting stage presence certainly someone to watch.

The choral parts were sung with effervescence by Tenebrae – one could not hope for a more haunting rendition of the celebrated Shepherds’ Farewell – while the LSO was in splendid form. Particular praise is due to the entire woodwind section, which was in its element here, especially during the flute and harp trio in the final part.

But it was Sir Colin’s evening without a doubt. When he takes command of the LSO’s choral extravaganzas such as this, you can guarantee that the results will be special and they were. Don’t miss his final performances as Principal Conductor of the LSO next week as he leads them in Handel’s Messiah. And be sure to witness the end of the Berlioz recording project on LSO Live with two performances of the composers remarkable opera Benvenuto Cellini next June.