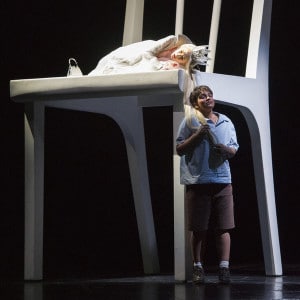 A double bill of Ravel operas may not constitute the most taxing evening for an audience, but the challenges posed to the production team and performers are quite considerable. While a staging of Radamisto might be excused a little unfocused direction if the singing and emotions are rendered effectively enough, the French composer’s  operas need to be delivered slickly and imaginatively from start to finish if they are to have any impact at all. The challenge is met well by Laurent Pelly’s L’heure espagnole but exceptionally so by his L’enfant et les sortilèges, with both pieces enjoying their first revival since appearing at the Glyndebourne Festival in 2012. In the process, it is also revealed how there is still a greater depth to these works than might first meet the eye.

One of the key themes of L’heure espagnole is time, and although Concepción may fear losing it in the sense of the specific hour in question, ideas of mortality and time as a precious commodity pervade the entire piece. This production emphasises the point by seeing Torquemada’s cluttered shop filled with clocks in all shapes and sizes, as hands whizz around and pendulums swing at different speeds. The movement also extends to the washing machine with its spinning clock face, and the bicycle whose wheels whirr round.

The direction is all-embracing so that Torquemada pops up seemingly from nowhere at the start and nods his head in time with the music, while the various escapades with a washing machine and iron introduce an appropriate air of suggestion. Much of the opera’s humour derives from the slick execution of the clock routines so that, even though we know there could never be anyone inside as they are lifted, we are still fooled to an extent. This production does leave us marvelling at how quickly the performer climbed in or out on some occasions, while the effect is enhanced by such embellishments as Ramiro virtually spinning the clock around above his head.

From among the strong cast Danielle de Niese stands out with her spirited and dynamic rendering of the feisty Concepción, and her voice finds some opportunities within the score to really open out. Étienne Dupuis comes across as an exceedingly likeable and well-meaning Ramiro who feels immensely honoured to be tasked with carrying the clocks and minding the shop. This in turn helps us to appreciate the comic piece as a morality tale in which, for the most part, the good triumph and the less deserving get their comeuppance. Cyrille Dubois with his long hair and flared trousers (the setting is broadly the 1970s) is a suitably conceited Gonzalve, shining the desk lamp on himself as he recites his poetry. Lionel Lhote gives a convincing portrayal of a Don Iñigo Gomez who knows it would be sensible just to leave and yet cannot bring himself to do so, while François Piolino is a commendable Torquemada.

For all of its strengths, however, there is still a sense in which this first revival is just a notch down on what was (I suspect) a leaner, meaner original production. The right jokes and ideas are certainly here, but, although the ‘strike rate’ may still be high, it does feel as if not all of them quite come off. For example, having three people pull at Don Iñigo as he is stuck in the clock, while standing at arm’s length from each other, was always intended to look comical rather than realistic, but the image generated does not quite hit the mark. There are no such problems, however, in L’enfant et les sortilèges which also sees an excellent performance from de Niese as she captures the Child’s mannerisms perfectly, with her head and shoulder carriage feeling particularly boyish.

The attention to detail throughout is exquisite, and as the various fairy-tale figures, animals and pieces of furniture come to life not a single routine feels below par or less than smooth. The costumes (designed by Pelly and Jean-Jacques Delmotte) are vibrantly original, so that the striped and chequered patterns of the Armchairs are mirrored in the clothes of the performers playing the parts. The dancing Teapot and Chinese Cup routine is highly amusing, while the depictions of the Shepherds and Shepherdesses on the wallpaper are stunning. Their clothes are monochrome and yet still manage to convey a sense of the greens and mauves that are sung about, while their thick whitened hair feels as if it could be coated in wallpaper paste.

With the boy initially sitting on oversized furniture, the early scenes pit the people and objects against a black background, with the stage hands doing remarkably well to stay out of sight as they wheel the Clock on and off. The later external scenes involving the animals introduce a palely lit moon, and see the area filled with a host of trees. Thus, as the staging becomes more all-embracing it reveals, as do so many operas, how the wholesomeness of nature triumphs over the artifices and expectations of society (although the Mother does play an important part in the ending).

Robin Ticciati conducts the London Philharmonic Orchestra superbly, bringing out the coolness as much as the mirth in the scores, and helping us to appreciate just how multi-faceted the operas are. The list of standout performances in L’enfant et les sortilèges is considerable, but particular mention should go to Elodie Méchain as the Mother, Chinese Cup and Dragonfly and Sabine Devieilhe as the Fire, Princess and Nightingale. The curtain call also feels like a work of art in its own right as the stage is filled with so many fantastic costumes, and it is a nice touch for every principal to wear their final costume while also carrying an item from the others that they donned over the course of the evening.