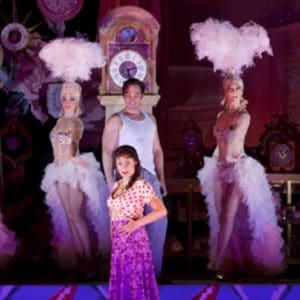 It’s always heartening when a revival not only comes up looking as fresh as a daisy but is even more compelling than when it was new. This is exactly what’s happened to Richard Jones’ already exemplary stagings of L’Heure espagnole and Gianni Schicchi for the Royal Opera. With many of the original cast returning to reprise their roles, it’s the casting of the leads in both operas which really makes the difference.

It’s not every day you’re confronted by a gigantic heaving bosom when you enter the auditorium of the Royal Opera House, but John MacFarlane’s proscenium-filling pair of prosthetics almost take your eye out a fitting visual metaphor for Ravel’s one-act opera L’Heure espagnole where the randy clockmaker’s wife Concepcion spends its one-hour’s length gagging for a shag. When Richard Jones’ zany staging was new two years ago British mezzo Christine Rice assumed the role of Concepcion, but pregnancy (irony of ironies) forced her to withdraw from these performances, and she was replaced by Romanian soprano Ruxandra Donose.

I would never have associated Donose with comedy, but she threw herself into the role of Concepcion and delivered a rip-roaring performance that wouldn’t have been out of place in a Carry On film. The remainder of the cast was unchanged from 2007. As the hapless muleteer, Ramiro, Christopher Maltman made his mark both vocally and physically – his richly coloured voice is becoming more golden by the day and as for those biceps! Enough – Yann Beuron made a stronger impression this time round as Gonzalve, whilst Andrew Shore delivered a scene-stealing cameo as Don Inigo Gomez.

Whilst the Ravel was hugely enjoyable, Jones’ production of Puccini’s impeccably-crafted comic opera Gianni Schicchi remains one of the finest things he’s staged, and that’s saying a lot! Updated to the ’50s, Macfarlane’s suitably grubby set provides the perfect framework for such a meticulously-drilled account of the work, here scrupulously revived by Elaine Kidd. Jones never wastes a single glance, movement or expression and the entire staging springs brilliantly to life. The ensemble work of the large, well-knitted cast was razor-sharp and you can tell that Jones has really listened to the music as his direction is at one with Puccini’s iridescent score, making this as fine a staging of this opera as you’re likely to see.

Many of the original cast returned, including Marie McLaughlin (La Ciesca), Jeremy White (Betto di Signa), Elena Zilio (Zita) and Gwynne Howell (Simone) and they were joined by newcomers Robert Poulton (Marco), Alan Oke (Gherardo) and in her belated Royal Opera debut Janis Kelly (Nella). All made their mark as did the thrilling young American tenor Stephen Costello as an ardently lyrical, dashingly good-looking Rinuccio. He was ably partnered by Maria Bengtsson who was a delightful Lauretta and rather than treat ‘O Mio Babbino Caro’ as a show-stopping aria, actually made dramatic sense out of it. Not surprisingly Thomas Allen gave a peerless account of the title role, which he seemed to inhabit more comfortably than his predecessor Bryn Terfel. There may be the occasional rough patch in the voice these days, but this only made his take on the role all the more authentic a great performance!

Antonio Pappano is certainly on a roll at the moment and he secured effervescent playing from an orchestra that is currently at the peak of its powers. A hilarious and unmissable night at the opera.