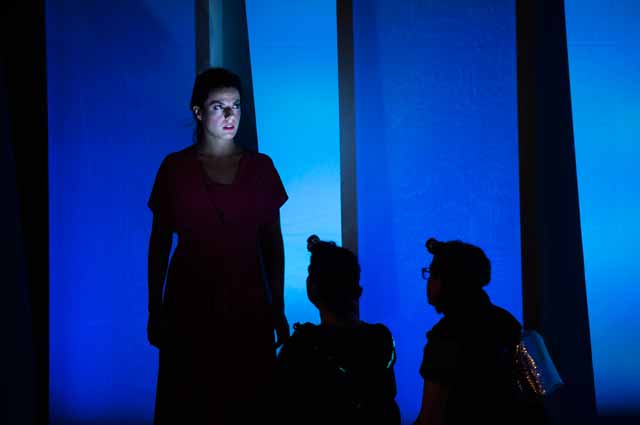 L’incoronazione di Poppea is a rather odd creation, given that it does not present the same tale of morality as lies at the heart of the vast majority of operas. With some exceptions such as Rigoletto, good usually triumphs, if only by remaining steadfast, so that even if the virtuous die the evil do not succeed. Monteverdi was, of course, writing before any operatic conventions with which we are now familiar were established. However, so conditioned are we today that, even knowing the story, it is hard to believe at the start that Ottone will not ultimately win Poppea while Nerone sees the error of his ways and returns to Ottavia.

Instead, Nerone decides he wants Poppea and rides roughshod over a wise advisor (who he forces to commit suicide), the feelings of his wife and all sense of political responsibility in order to marry her. In return, no matter the circumstances that led each to contemplate it, Ottavia, Ottone and Drusilla, if she knew why Ottone wanted her clothes, hardly behave nobly in attempting to murder Poppea, so that overall we feel virtue has hardly triumphed at all.

This, however, as director Jenny Miller argues, is rather the point of the opera. As revealed through their representation by different characters, love is quite distinct from virtue. Like Nerone, it has no sense of responsibility, and thinks nothing of the future (seventeenth century audiences would have been familiar with the notion that the Emperor kicked his pregnant wife to death only six months after marrying her). It therefore thinks only of the moment, which in itself makes it completely timeless. Miller also argues, however, that the opera is fascinating precisely because it reveals the entire spectrum of human nature. After all, glimpses of nobility can be seen in the way in which Seneca goes to his death with dignity, Drusilla decides to cover for Ottone, Ottone confesses everything in order to save her, and Nerone shows leniency in recognition of Drusilla’s selfless actions.

In keeping with the idea that love is timeless, Miller does not set the drama in one single age so that ancient costumes rub shoulders with modern clothes. Amor, La Fortuna and La Virtù wear hoodie style attire, complete with tiny backpacks and luminous features, thus emphasising their universality as they sit outside of any specific time. Everyone else generally wears costumes from the Roman era, although Seneca’s clothes seem to mix the ancient and modern and Valletto’s (Rosie Lomas) are modern while duplicating the colours of Ottavia’s own.

Nate Gibson’s set consists of a series of semi-transparent monoliths that before the interval are arranged so that areas behind them can be seen. In this way, we spy Ottavia being prepared for her first entrance and La Fortuna (Anna Cavaliero) changing to become Damigella. Although the latter’s doubling up may have been inspired by practicalities, it is in keeping with both of the characters in the same way that it is appropriate for La Virtù (Isabella Cheevers) also to be Pallade. More generally, the three goddesses are frequently present, including in the auditorium, to oversee the action as they also chalk up graffiti on the central monolith. Amor writes ‘LOVE’ before changing it to ‘RELOVEUTION’ (revolution) and La Virtù writes ‘GRIME’ and then alters it to read ‘LAGRIME’ (as in tear). In the second half the monoliths appear in more orthodox lines so that Ottone can hide among them to overhear Drusilla’s confession, and Nerone and Poppea can weave behind them while singing ‘Signor, hoggi rinasco’.

The excellent guest orchestra, Instruments of Time and Truth, conducted from the harpsichord by Jeremy Silver, is small enough to be placed on a raised platform within that part of the pit that is directly in front of, as opposed to below, the stage. This aids balance between players and singers as the sound of the ensemble does not feel buried, and also provides for a space at one end of the pit for Seneca to step into from the stage and hence descend to his death.

L’incoronazione di Poppea constitutes Longborough Festival Opera’s 2018 Young Artist production, and the cast is magnificent. As Nerone, Anna Harvey’s exceptionally full and developed mezzo-soprano works well with Sofia Troncoso’s beguiling soprano as Poppea, especially in ‘Pur ti miro’. Matthew Paine exhibits a very fine countertenor as Ottone, while Maria Ostroukhova reveals a highly mature and resonant mezzo-soprano as Ottavia. From among the multitude of other excellent performances, Lucy Knight displays a beautifully sweet soprano as Drusilla, Chiara Vinci is highly persuasive as Amor, Beth Taylor’s mezzo-soprano has intriguing depth as Arnalta, while the exceptionally strong and firm bass-baritone of Matthew Buswell makes him stand out in the relatively small role of Seneca.