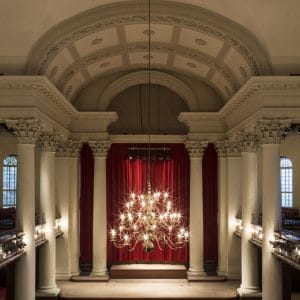 Whilst the last seven of Mozart’s operas continue to pop up in the repertoires of most opera companies on a regular basis, and Beethoven’s Fidelio is never far away, Haydn’s wonderful and innovative works for the theatre linger in obscurity. In consequence, it has been difficult to judge whether their reputation of not being stage-worthy is justified.

Certainly, Antal Dorati‘s pioneering series of recordings of several of the mature operas, in the wake of the scholarly Complete Haydn Edition of the scores, helped to bring them back into the limelight. But they still receive only a spattering of staged performances, as Haydn is considered box office death.

So it was all the more commendable that the sprightly Bampton Classical Opera company brought their summer 2004 production of the 1773 work L’infedeltà delusa to St John’s, Smith Square, for a semi-staged performance in English.

Not that there was anything half-done about this sparklingly witty evening’s entertainment, which delighted in almost every respect. That the venue was practically full also showed that people are eager to see Haydn’s stage works, and one hopes that the company will turn its attention to more of his masterpieces in future years.

Deceit Outwitted, as the libretto’s translator Andrew Porter calls it, was only given three times in Haydn’s lifetime (as far as we know), the result of his being stuck as the court composer at Esterháza for the majority of his productive career. Certainly the post had its artistic benefits, and allowed Haydn to write no end of fascinating works – from the unusual story of Il mondo della luna to the five or so marionette operas he composed to satisfy the current fad in court society.

But it’s a shame that Haydn never really had the chance to write a series of operas for a major city opera house, which would have thrown light on his talents for dramatic pacing.

One of the many strong points of Bampton’s excellent performance was their complete conviction in the quality of the work. With only five singers, minimal sets and coloured lighting, they conjured up all the pictures necessary to convey this charming comedy.

The story tells of the shepherdess Vespina’s cunning in winning her lover, Nencio, back from a pre-arranged marriage to Sandrina. Meanwhile, she paves the way for her brother Nanni to marry Sandrina in Nencio’s place – and all to the disgust of Sandrina’s father, Filippo.

It’s a brilliantly composed piece, full of the most inspired arias, and the two act finales and the opening ensemble show an unprecedented level of dramatic craft in Haydn’s stage works.

Of the five soloists, one was outstanding. The soprano Kim Sheehan is an artist to watch, a natural Mozart singer if ever there was one. I’m not surprised that her teacher is the great Lillian Watson. If the opportunity arises to hear her as Susanna in Mozart’s Figaro, it will be a knock-out, as her solo singing in her four difficult arias, especially those done in various disguises, was brilliantly projected and elegantly phrased.

Also impressive was Huw Rhys-Evans as Filippo, who made an instant impact in his Act 1 aria when he orders his daughter to marry Nencio whether she likes it or not. His conveyance of the text was the best of the five, in fact, allowing us to hear very word without straining.

Perhaps Cheryl Enever needs a little more experience before she takes on more difficult roles of the size of Sandrina, but she did sing her final aria with emotion and was always dramatically engaging. Nicholas Merryweather warmed up in the role of Nanni after a wooden start, but the really stylish singing came from Nicholas Sharratt as Nencio, gracefully sung indeed.

Jeremy Gray‘s direction was much appreciated, incorporating the entire space available and really drawing the audience into the action. It was also mercifully unpretentious, allowing the farce to play for what it is.

The brilliant accompaniment came from the London Mozart Players, a period orchestra with bite, and Jason Lai was the talented young conductor.

Despite the odd reservation, this was always an enjoyable evening, and the only shame is that there are no further performances. Their summer 2006 production of an opera by Martin y Soler, Mozart’s Spanish friend and contemporary, is certainly something to watch out for.