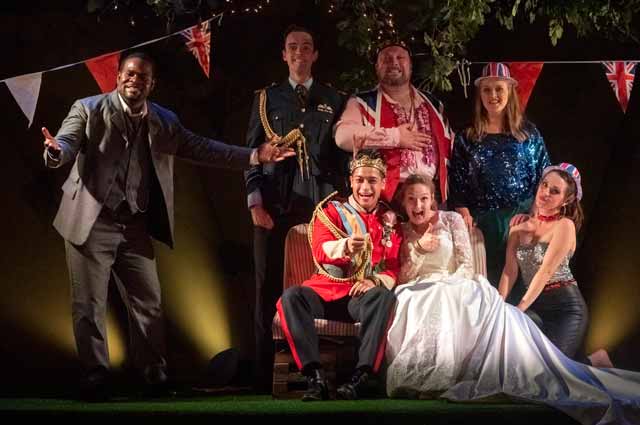 One of the delights of West Green House Opera is that its programming allows audiences to enjoy more than one event on the same day so that they can get more out of their time, and spend an afternoon exploring the beautiful gardens between the lunchtime and evening performances. This year the schedule is planned so that the viewer can experience two sides to the same composer, as Rossini’s rarely performed L’inganno felice is presented in the intimate Lakeside Pavilion before his more famous La Cenerentola graces the larger Green Theatre.

Rossini described L’inganno felice (The Fortunate Deception) as a farsa although, as Richard Osborne suggests, such a designation is ‘misleading in the light of its semiseria status as a romantic melodrama with buffo elements’. Premiering in 1812, it sees the villainous Ormondo desire Isabella, who rejects his advances as she is happily married to Duke Bertrando. Ormondo in his rage bribes Batone to cast her adrift on a boat at sea. Both men believe that she subsequently drowned, but she was rescued by a local miner, Tarabotto, who disguised her as his niece, Nisa. Ten years later, when the opera actually begins, Duke Bertrando visits the mines with Ormondo and Batone, with the latter being the first to recognise that Nisa is, in fact, Isabella. He plots with Ormondo to abduct her that night, but Tarabotto overhears their plan and arranges events so that they are exposed. After Isabella reveals her Duchess’ clothes and a portrait of the Duke that she kept with her, she and Bertrando are reunited.

Donizetti’s Rita in 2017 and Offenbach’s Ba-ta-clan twelve months ago, which were both directed by crime writer Morag Joss, featured quite elaborate sets considering the size of the venue. This time, however, director Mark Burns has taken a different approach, paring everything down to an absolute minimum. The characters are costumed, but the stage features nothing other than a screen to one side that creates a ‘backstage’ area, so that the scenery is effectively provided by the greenery and lake that can be seen through the pavilion’s windows.

This provides an opportunity for the characters to take centre-stage in every sense, and it is one that is not wasted by the performers as Tarabotto’s complaint that Nisa is always moaning sounds so much like a family member’s lament that it reveals how much he really sees Isabella as one of his own. There is also humour to be had as the English translation sees ‘wifey’ rhyme with ‘lifey’ and ‘mikey’ (as in ‘taking the mickey’!), while Batone’s assertion that he had assumed Isabella had drowned receives the rather terse response from Ormondo of ‘Looks like she can swim!’. The piece is sung and acted to excellent effect by Thomas Humphreys (Tarabotta), Timothy Dickinson (Ormondo), Adam Temple-Smith (Bertrando), Jan Capinski (Batone) and especially Elizabeth Karani as Isabella, while Oliver Gooch’s conducting of the Orpheus Sinfonia similarly contributes to the overall delight of the production.

La Cenerentola in the Green Theatre is directed by Victoria Newlyn and designed by Richard Studer, who was responsible for Die Fledermaus earlier in the season. The tale is told broadly in the modern day, with Don Magnifico’s house being represented by a clapped out Citroen 2CV, which looks as if it stands in a camp and thus emphasises how desperate his finances have become. On the other side of the stage Ramiro’s palace is suggested by a trim Range Rover boasting the number plate ‘HRH 007’, with contrasting images of posh and dilapidated Palladian villas in the background completing the effect.

While initially all this may seem to represent no more than a hook on which to hang the drama, as opposed to a concept that really says something about the piece, lots of details raise the level of the production’s thesis. For example, a tree standing centre-stage captures the lines that everyone sings in the Finale to Act I, ‘Mi par d’essere sognando / Fra giardini e fra boschetti’ (I seem to be dreaming among gardens and woods), and by extension highlights the dreamlike quality to the entire affair. The concept is also followed through well so that, while the performance is in Italian, Lydia French’s surtitles translate ‘carriage’ as ‘car’ as Alidoro ensures that it stops in the right place for Ramiro to find Angelina by making a few adjustments under its bonnet.

Matthew Kofi Waldren’s conducting is highly accomplished as he elicits an extremely smooth and balanced sound from the West Green House Orchestra, which plays Jonathan Lyness’ reduced orchestration, and effectively captures not only the rhythms of the music but of the piece as a whole in terms of its overarching momentum, themes and humour. Several performances stand out in particular with Nicholas Mogg revealing a baritone of great aesthetic refinement, nuance and depth as he really relishes playing Dandini masquerading as the Prince. Filipe Manu reveals a beautifully radiant and expansive tenor as Ramiro, Heather Lowe as Angelina sings ‘Nacqui all’affanno … Non più mesta’ extremely well, Zoe Drummond and Sioned Gwen Davies provide great comedy value as Clorinda and Tisbe respectively, while Blaise Malaba has real presence as Alidoro.

The production features no chorus, which necessitates the cutting of Don Magnifico’s scene in the wine cellar. Although this seems a shame since the penchant for comic timing that Matthew Stiff displays all evening suggests he would have elicited much humour from it, it is remarkable just how well the seven principals create all of the necessary dynamism and colour for the ball and wedding scenes, which would normally involve many more people. On the surface, many of their movements might appear to consist of some simple shuffling or 1980s ‘sit down’ dancing, and yet the slick handling of the routines ensures that at every stage the characters and their relationships to each other are being revealed. In this way, the closing tableau, in which the colours of the costumes interact brilliantly with those of the celebratory flags hanging overhead and Sarah Bath’s green light that illuminates the tree, shows how strong the attention to detail is, and just how much can be achieved with what would appear to be relatively limited resources. Both of these productions are individually deserving of at least four stars, but the day that together they generate is certainly worthy of the highest rating.

Full details of West Green House Opera’s 2020 season, which includes productions of La rondine and Eugene Onegin, will appear on its website in due course.