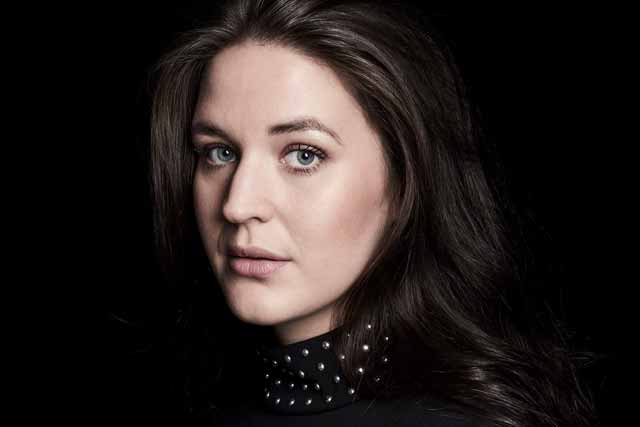 Norwegian soprano Lise Davidsen sang Ariadne at Glyndebourne Festival Opera in 2017 and Freia, Ortlinde and Third Norn in Covent Garden’s 2018 Ring Cycle. Many believe it is only a matter of time before she takes on Brünnhilde, but none of this should detract from the fact that she is also fast establishing herself in the concert hall. This current performance actually constituted her first recital at the Barbican, but it seems to safe to say it will not be her last.

Indeed, any talk of Davidsen being a Wagnerian soprano should not mask the fact that her voice is infinitely flexible and versatile. It is not a sound that possesses some strengths that can be maximised on and certain weaknesses that have to be managed, but rather one that proves strong across the board. Because everything is there, it means she can phrase any line or shape any sound exactly as the music demands, because her voice will always support the requirement. In this way, she can micromanage her sound, bringing a vast array of tinges and textures to it.

For the first half of the concert, Davidsen was decked out in a silvery dress while the lights were dimmed and a green hue was cast across the stage. This made it difficult to see the programme and, although English surtitles appeared, this was of no use to those who like to read the original words, or to see the full translation so they can place the line currently being sung in its wider context. In many cases as well, the translation in the programme differed significantly from that in the surtitles.

Such points, however, paled into insignificance when considered against the quality and beauty of Davidsen’s output. Accompanied by pianist James Baillieu, the concert focused on German and Scandinavian song. It began with five by Brahms that were all taken from different parts of his career, and not all performed in chronological order. In ‘Auf dem kirchhofe’ (1886) the way in which Davidsen contrasted ‘Gewesen’ (deceased) and ‘Genesen’ (released) two lines later was masterly, with the transition from the penultimate word ‘still’ to the final ‘Genesen’ being skilfully managed. In contrast there was an intriguing, almost haunting, melancholic quality to her sound in ‘Mädchenlied’, also written in the same year, as she contemplated spinning for no one while everyone else did so for their lover.

Davidsen followed these with R. Schumann’s Gedichte der Königen Maria Stuart, Op. 150 (1852), which follows the life of Mary Queen of Scots from her departure from France in 1561 to her beheading in 1587. The most striking phrases at the top of her register could feel overwhelming and yet never harsh, while lower notes possessed gravitas but always felt thoroughly rounded and never effortful. In particular, while she made use of vibrato, it never really seemed as if she did because it felt like a natural part of her strong voice, as opposed to a deliberate addition. Before the final song Baillieu explained that the words that followed were those of the prayer Mary said before her execution, making them feel particularly powerful.

Davidsen performed Sibelius’ tone-poem Luonnotar, Op 70 (1913), albeit then with a full orchestra, at the Proms in 2017. Here the lighting effects created ripples across her dress to depict the water into which Luonnotar descends, but also perhaps the air from which she comes and the heavens that are created at the end. She captured well the sense of the earthy combining with the divine as Luonnotar works with a duck to create the moon and the stars out of its eggs.

After the interval Davidsen, now dressed in black, sang Sibelius’ Five Songs, Op. 37 (1900-02). She made it feel as if there was a glistening glory to the first kiss in ‘Den första kyssen’, while a certain delicacy was always brought to the refrain of ‘Lasse, Lasse liten!’ in the eponymous second song. The final one, ‘Flickan kom ifrån sin älsklings möte’, was particularly evocative as one could feel both the mother’s outward sternness at the girl’s hands and lips being red, and her private amusement at the girl’s lies that she had been picking roses and eating raspberries. If, however, this was because the parent saw such secrecy as a natural part of young love and growing up, it only made the final verse sadder when the girl returned home with pale cheeks because her lover had been unfaithful, with Davidsen’s final line feeling like a monumental cry.

Three of Grieg’s Sechs Lieder, Op. 48 (1889) followed, with Davidsen saying she wished to perform songs that originated from her own country of Norway, particularly to show how they contrasted with the Finnish ones and thus reveal two different approaches to understanding love. The three she sang – ‘Dereinst, Gedanke Mein’, ‘Zur Rosenheit’ and ‘Ein Traum’ – certainly seemed to possess particular gravitas, shorn of any sense of ‘folk song’ inspiration that might have been apparent in those by Sibelius. That they felt quite so deep was attributable to Davidsen’s performance but also the original German poetry, which surely had an influence on how Grieg chose to set the words.

Davidsen felt particularly at home in the seven songs by R. Strauss that ended the main programme. Whether we are referring to the dreamy tone brought to the opening line of each verse in ‘Wiegenlied’ (1899), the sense of a joyful cry brought to the line ‘Zu seligen Höhn’ in ‘Cäcilie’ (1894), or the thoughtful, and well deserved, tribute she paid to Baillieu before embarking on this final song, her performance felt perfectly pitched in every way.

Although there were occasions when Davidsen raised her arms and clenched her hands to emphasise the intensity of her feelings, overall she was quite a still performer. It was clear, however, that there was so much emotion in her sound and simple presence that large gestures would have been totally superfluous. An illustration of just how involving her performance style was came after the main programme had been completed for it is extremely rare for a recital’s encore (in this instance, Strauss’ Morgen! of 1894) to be met with several seconds of silence before the rapturous applause begins.

For details of all of Lise Davidsen’s and James Baillieu’s recordings and upcoming events visit their respective websites.