by Yangen Xu
published: 24 May 2006 in Opera and Classical Reviews
Tweet 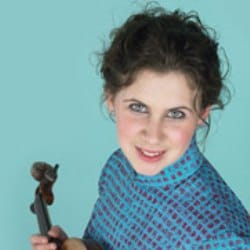 Prior to this concert, supermarket giant Waitrose kicked off the evening with a complimentary box of Belgian chocolates for every single member of the audience, which we were warned under no circumstances to consume during the concert I do not yet know of a better way to start a concert than this!

Given in the presence of the London Chamber Orchestra’s Patron, Her Royal Highness the Duchess of Cornwall, the concert started with Rossini’s Overture to The Italian Girl in Algiers, a work of immense comedy that the LCO brought to the fore.

Excellent control in the cheerful main theme, with sudden dynamic changes, mood swings, and tempo fluctuations, left the audience breathless in anticipation of the next surprise.

Conductor Christopher Warren-Green, who is one of the most debonair conductors in the world, was almost dancing to the music, and it was really nice to see that the orchestra members were observing his every gesture while enjoying themselves immensely. However, there was a tendency for the strings to play full vibrato only at the beginning of each note and abruptly cutting it short. Also, the entire orchestra seems to lean into their notes a bit too much perhaps a personal irritation, but one that resulted in some imbalances.

Nevertheless, it was a suitably fun performance of a fun piece, and an impressive start to the evening.

Anyone who has seen the solo violin part of Beethoven’s violin concerto would admit that it looks more like a study in arpeggios than a violin concerto. With nineteen-year-old violin prodigy Chlo Hanslip however, there was no fear of this most famous of violin concertos turning into an etude.

Her meticulousness with every single note was apparent throughout the first movement. I was particularly impressed by the extreme care she took with her vibrato and bowstrokes, and the subtle nuances she managed to evoke within each note. Where most violinists twice her age would have had problems with trembling bows (due to poor bow control) in the upper registers, Hanslip really turned them into something pristine and special. Being young, she was not afraid to try new things either, with sudden stark changes in dynamics. Never once during the first movement was I given a chance to be distracted. Truly the world has a prodigy in this young player.

Even though the performance was technically proficient, Hanslip’s lack of ability to hold a long lyrical line during the second movement rendered it a disappointingly bland performance. The last movement, however, was played with an intensity that is rare amongst violinists. Fiery, passionate, and with one of the most powerful tones in the world, Beethoven’s Rondo truly became a dance, and not just a piece of fast music to end the work. Admittedly, I wish she had taken more time generally instead of flying through the faster bits, and her intonation was not exactly perfect, but in all it was an amazing performance.

Mozart’s Jupiter Symphony, which was played after the interval, was a performance of tremendous intensity. The LCO’s ability to project power is really exciting; particularly in the last movement, their vigor and enthusiasm was truly unrivalled.

For the encore, we were treated to ‘To Spring’ from Grieg’s Lyric Pieces, where the LCO strings demonstrated their fantastic ability to produce an ethereal sound from nothing. Trying to blend sounds together when starting from silence in a group is certainly not easy, and the LCO deserves immense credit for that. If only the vibrato had been more consistent; it would have been the perfect evening.