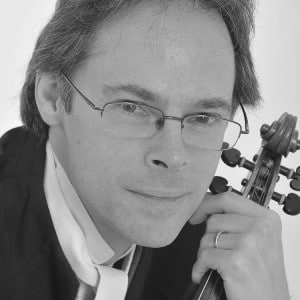 We’ve known for some decades now how baroque music is supposed to ‘go’ – the sprightly tempi, the original instruments, the small ensembles; the latest fashion seems to be to play with timbre by embellishing the continuo with percussive and plucked instruments. With the St Matthew Passion, we’re restricted to the instruments Bach prescribes, and a chamber-organ continuo. A one-to-a-part version of the piece, then, would appear to limit the sound-world even more – which just shows how wrong anyone can be.

How does a critic begin to describe the most perfectly performed musical experience in many years? By listing, of course, in a roll of honour, those who created it, beginning with the masterly Adrian Butterfield, whose sure direction (from the violin) and complete immersion in the idiom was undoubtedly responsible for the exceptional quality of the performance.

The London Handel Orchestra coaxed such variety out of their instruments: the strings bright or whispering or metallic; the flutes pure and woody; the oboes (d’amore and da caccia) plaintive or gnarly. Every note was weighed for length, volume and timbre, and every bar of ensemble was perfectly together.

It is difficult to single out anyone’s performance – all contributed to the creation of a highly emotional evening in which three hours passed in seemingly no time at all. Charles Daniels must be mentioned for his astonishing marathon: singing not only all the chorus-tenor parts, but the first-tenor solos, and the Evangelist, a role that requires – and received in full measure – phenomenal vocal dexterity. Daniels, a seasoned early-music performer, gave us a perfectly nuanced performance in the latter role – at an obvious level, creating vocal ‘screen wipes’ in the narrative to indicate a new scene, or a quotation from the prophets, but also at the tiniest level of detail, he gave us the pianissimo marcato of Jesus tiptoeing back to his sleeping disciples at Gethsemane, and an almost-imperceptible halting hiccup for the thump of rope on throat when Judas hangs himself.

There were so many other moments of delight in the performance, but a few come to mind at random: the deliberately discordant sinister sound produced by the oboes, strings and viola da gamba in Mein Jesus schweigt; the back-to-back formation of a concertino group of Daniel Taylor and Adrian Butterfield for Erbarme dich; the look given by Edward Grint (Judas) to Benjamin Appl (Christus) at the moment of betrayal; the perfect meld of woodwind and Joanne Lunn’s voice – through a play of suspensions that would break the stoniest heart – in Aus Liebe will mein Heiland sterben; and finally, the moment when, for Mache dich, mein Herze rein, with a smile like sunrise on Easter morning, Benjamin Appl changed the tone of his voice from gentle warm Christus to bright harbinger of the Resurrection.