Kings Place was host to a concert of English music fronted by the London Sinfonietta. 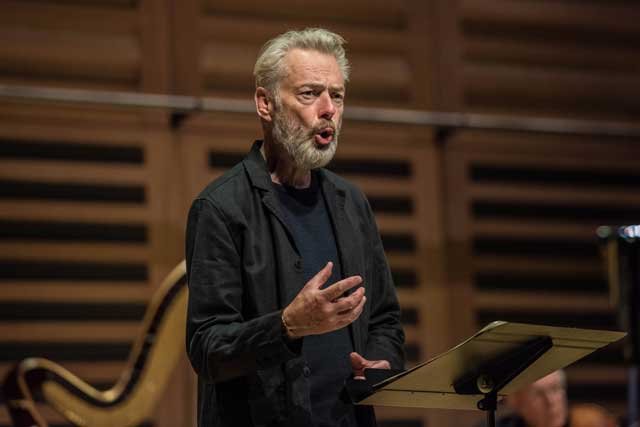 Last Saturday marked the return of the London Sinfonietta – arguably Britain’s premier contemporary music ensemble – to the concert platform. At Kings Place they offered a programme of music by Peter Warlock, Charlotte Bray and Luke Bedford, whose connecting thread was ‘Lessons from the past’.

“I began with the desire”, Stephen Greenblatt put it in words set by Bedford in the final piece of the evening, “to speak with the dead.” Whether and how restrictions continue to lift is at present unclear, but as we emerge from this crisis works of mourning, reflection, expressing our sense of the world being disturbed will feel more important than ever.

A crucial ingredient was to be the haunting tenor of Mark Padmore, a singer whose voice has an uncanny ability, with its lived-in feel and melancholy delicacy, to summon the themes of the concert: nostalgia, loss, alienation, the mystery of those lost to us – and how we might reach them.

Padmore and conductor Geoffrey Paterson began with The Curlew, Peter Warlock’s 1922 setting of W.B. Yeats, scored for string quartet with additional flute and cor anglais. The latter, along with spare interjections from viola, is especially important to the eerie sound world of this unconventional masterpiece. Yeats and Warlock – the latter chose a surname reflecting his occult interests – were both taken, as many modernists were, with mysticism and spiritual arcana, in response to a world dominated by the iron logic of reason. In The Curlew there is an eerie sense of trying to commune with the past and with the dead, as well as the most mysterious aspects of the self.

The cycle has been described as an English Winterreise, but this perhaps misses the mark as its poetry is Irish. Warlock, who like Schubert died tragically young, was also proud of his Welsh ancestry, and the sparer music of The Curlew often seems to summon the rugged escarpments and untamed, bleak moorlands of the Welsh borders where he grew up.

The music also possesses an expressionistic lushness that alternates with the austerity of single instrumental voices passing one melodic fragment to another, like shadows moving across the ensemble. The Cor Anglais suggests the existential abandonment of Wagner’s Tristan; it is elusive music and the most stark of pastorals. Its frequent bird calls had, in the hands of Melinda Maxwell and Karen Hall (flute and cor anglais respectively) the most unearthly tendency.

Padmore offered his characteristic range of textures and vocal gestures, occasionally exploding into full-voice climaxes – one extraordinary passage in Warlock’s first setting saw him singing forte unaccompanied, as if the emotional doors had suddenly been kicked in – and at other times offering a pure sound that is nonetheless far from innocent. His stripped back approach to vibrato and clipped diction works wonders with this etiolated music of experience. ‘The boughs have withered’, went one remarkable refrain, ‘because I have told them my dreams.’

Charlotte’s Bray’s Midnight Interlude followed, a duet for clarinet and ‘cello after a song cycle she had composed on the poetry of Thomas Hardy. Each piece was prefaced by a reading of a Hardy poem by cellist Tim Gill, to set the mood and point up the connections between music and verse.

Bray passes melodies from ‘cello to the clarinet of Timothy Lines in a restless, ruminative way, one instrument picking up from the other at the same pitch, sometimes affectionately and sometimes assertively; there is a kind of timbral rhyming at play that mirrors the surprisingly placed end-rhymes of Hardy poems like ‘A Thunderstorm in Town’. There is a powerful sense in of conflicting impulses of desire and reticence, the melancholy sense, as in the poetry, of opportunity missed. In the final piece, just as the excitable energies seem to be gathering steam, they disappear with an unexpected disarming flourish.

The concert continued with the world premiere of Luke Bedford’s In the Voices of the Living, for tenor and small instrumental ensemble, especially brightened by a spike of harp and piano. Across five movements Bedford sets the words of Stephen Greenblatt, Petrach, Leopardi, James Joyce, and a collage of quotations from Shakespeare; they explore our strange connections to the past through writing and art. Musically his approach is relatively simple, creating background textures and patterns that modulate gently but ultimately provide a canvas on which Padmore can paint with the text.

The opening setting of Greenblatt saw Padmore executing the extraordinary blend of legato and parlando singing so familiar from his performances as the Evangelist in the Bach Passions. It is set against an opening prelude that feels like a ritual evocation, with glorious muted colours in Bedford’s combination of bass flute and clarinet. The second movement’s setting of Petrach glittered with light and air, sung by Padmore with keening intensity.

The following setting of a line from Joyce’s Ulysses was a little one-dimensional in its musical imagination, and it seemed strange in a work about channeling the dead that Bedford was not drawn to Joyce’s famous invocation of the gramophone which plays the voices of the departed. The penultimate movement was sensuous and searching, building to an extraordinary vocal and instrumental climax. The final movement, a collage of Shakespeare’s ‘After’ phrases (‘After the flesh’, ‘After the taste’) was as ceremonial as the opening, ushered in by strange rumbles from the harp and the deep mystery of the bass flute.