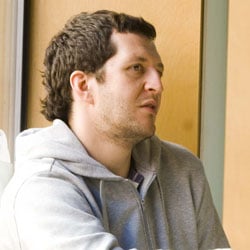 As part of the Ether 08 Festival, the world premiere of a work by Thomas Adès, a composer and conductor who has, as the programme acknowledges, now stopped being known for his prodigiousness, was joined by a key work of the veteran but still highly influential Steve Reich. The evening may for the purposes of performance be split into two halves but its importance to history should be considered as a whole that is, inarguably, greater than the sum of its parts. Both pieces, performed by the London Sinfonietta as part of its 40th anniversary celebrations, were originally planned as part of the re-opening, following refurbishment, of the Southbank Centre.

Adès’s piece was commissioned especially for this purpose, as were the accompanying visuals from Tal Rosner. The two composers, the performing musicians and the space in which they are brought together represent the brightest and the best in contemporary classical (at one time in danger of becoming an oxymoron) music. Fifty years ago, Reich was one of the most forward looking, innovative and perhaps more obvious in retrospect than it would have been at the time championing forces in classical music. A man who, at the heart of the Swinging Sixties, still believed that music had a future beyond rock’n’roll.

Ads is the latest chapter in the legacy he has given the music world, a composer whose work may well have been very different had he not had foundations laid by Reich on which to build. It soon becomes apparent that to be appreciated fully, Adès’ music has to be performed, not simply listened to. This is not only because of the waves on the visuals, pulsing and phasing with the violin strings to make the sensual experience an integrated whole, but also because this is not background music, not easy listening with its plucked staccato strings and dramatic changes of tempo and harmony: seven acts in barely 30 minutes, each one closer in time to a radio-friendly pop track. Would it even work, on CD, at that length?

The juxtaposition of calmness and brusqueness, descending into the sonorous, ocean-depth lament of the bassoons one second, piano birdsong the next, is too jarring to let you relax, forcing your attention back to the stage every time it may dare to wander. From crescendo to minimalism, there is no surrender, and every time you start to relax, start to edge into sleep, the music will reawaken you with the dawn of a new light. As In Seven Days comes to an end, with violins plucked in sync with your heart strings and in phase with your breath, Adès pulls his piece de resistance: an abrupt ending that comes far, far too soon. A world premiere of Adès’ work, conducted by Adès himself: it’s hard to know if the audience fully appreciates what it has just seen.

This should be an impossible act to follow something which did not exist yesterday and will survive any of us – but London Sinfonietta not only manage to tackle one of Reich’s most difficult works (which existed for its first 20 years with no published score), but also mark the 10th anniversary of their first performance of it with an effort that warrants a standing ovation. They rightly deserve it, having produced 55 minutes in which to lose yourself in the meditative quality of the repetitive beats, sinking down into its richly textured lake until you focus on the instrument that will bring you back up. But anymore than they did for their performance before the break?

Familiarity breeds contempt, or so they say. Here, it did both that and the opposite. Reich’s piece that gets the standing ovation because it is a work we know, understand and love, and London Sinfonietta have nurtured it beautifully. Adès’s piece was placed before us to be judged. Not to worry. Its ovations will come one day in the future when, no matter how good we thought it could be, someone will show us that it can be better.

It is a shame that Reich could not be here tonight to conduct his work himself. But then another thought occurs. One day, 40, perhaps even 50 years from now, when Adès is truly the old master rather than the enfant terrible, perhaps there will be another show, when In Seven Days is the bar against which a new world premiere will be measured, and a new young turk will stand against it and show what he can do. It is a day to which we should all look forward, and a type of phasing of which Reich himself would no doubt be proud.