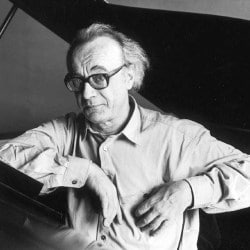 Even at the age of seventy-five, Alfred Brendel carries the aura of one of the great musicians of our time, and as he entered the Barbican Hall tonight there was a hush of expectation as the audience anticipated the legendary pianist’s special magic.

And much of the Brendel magic was still alive in his playing of the Mozart Piano Concerto No 25 in C major: the careful articulation of staccato notes, the revelation of details that would usually be skimmed over.

In particular, I loved certain sections where his articulation was semi-detached, evoking the sound of a period fortepiano.

Yet the performance was by no means perfect, and however enthusiastic the London Symphony Orchestra‘s playing, it was impossible to ignore the slightly anaemic tempo taken by conductor David Zinman, probably in consultation with Brendel.

Indeed, the pianist had a tendency to slow down as lengthy passages progressed, making this a very long performance. The one exception to this pattern was the beginning of the third movement, where Brendel seemed to push the orchestra to a faster tempo in his first solo, only to then pull in the reins as the music became more technically demanding. An excess of pedalling caused scale passages to blur, and there were serious lapses of coordination between the hands (and with the orchestra).

The LSO was hugely sympathetic, though, and played as well as they always do with one of their virtuoso friends. Especial praise is due to the solo flautist, who was exceptional throughout the evening, and the clarinetist, who brought a hint of beauty to a sometimes enervated second movement. The final movement was by far the best, the most magical moment being at the movement’s heart when the pianist descends and re-ascends two octaves in sixths. Brendel effected the most sublime diminuendo on the ascent back to the main theme, and it was a marvel to witness.

After the interval, the performance of Mahler’s Ninth Symphony was a similar story: good in parts. Bravo to the man in the stalls who stood up halfway through the first movement to awaken a man sitting at the back who was snoring for England! There are cheaper ways of getting to sleep, but in some ways I cannot blame the poor chap: Zinman’s interpretation was a bit soporific at times. The climaxes were big, with the LSO’s trumpets blazing away at their best; the harp notes at the beginning were both wonderfully intimate and superbly projected.

Yet there was not much in between these two extremes, and a sense of architecture was lacking, for me. I enjoyed the sense of the Classical about the performance: in all four movements, Zinman emphasised contrapuntal lines, and in the second movement the rhythms of the Lndler were strongly pronounced. But it was all a bit heavy-handed, with not much contrast between loud and soft, slow and fast, and by the closing bars of the last movement I for one did not much care where the journey had taken us.

Personal tastes certainly come into my reaction (though I was not alone): I simply don’t agree with Zinman’s view of the piece. The LSO, however, was impeccable through most of the symphony, which is an 85-minute marathon. The sighing violin melody that pervades the whole symphony, the gorgeous oboe solo in the second movement, the trumpet’s in the third and the first violinist’s solo in the fourth: all these were classily done, a sign of an orchestra still very much at the front of London’s music scene.