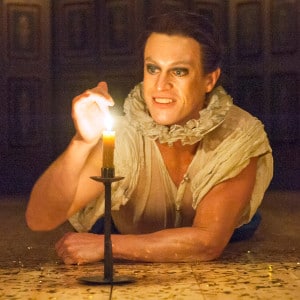 Don’t sit at the front of the Pit or the front left of the ‘stalls circle’ unless you’re happy to be fondled or scolded – that is, if you have not already booked for this wondrous piece of music theatre, and you can manage to snag one of the very few remaining seats. This ground-breaking first collaboration between the Royal Opera House and the Globe Theatre is directed by Kasper Holten with such a sure touch that you’d imagine he spends his whole life steeped in baroque opera instead of being ‘merely’ the Director of the ROH, and it is gloriously sung, exquisitely played and above all entertaining from beginning to end.

And what a beginning it is: ‘Music’ descends from on high to sanctify the new inclusion of her art in this tiny, wooden-framed, candle-lit space, and she sets the tone for all that is to follow: hilarious where hilarity is required, deeply moving in crucial moments of drama, and encouraging the warmest audience response. We have only fragmentary knowledge of the precise conditions of theatres such as these in their original form, but we don’t need that to feel thrilled with so intimate (only 340 seats) a space, so ideal for the performance of works such as this.

Such intimacy – you could reach out and touch the singers, and they often do just that to you – tends to expose any weaknesses in voice or acting, but here there were none. I’ve previously praised Samuel Boden’s “sweet, refined tone” and he used it to advantage in his singing of Ormindo, phrasing his music with elegance and creating a warmly sympathetic hero; he was well matched with Ed Lyon’s macho Amidas, the latter adding yet another to his impressive gallery of baroque opera roles. Graeme Broadbent was a magisterial King – this is one of the truly great bass voices, and it’s worth going just to hear him utter those sonorous notes. Harry Nicoll’s character acting is as strong as his tenor voice, and he was a superb Eryka; James Laing is clearly a name to watch, his Nerillus as funny and well sung as his blind, beribboned Cupid. Ashley Riches was a sympathetic Osman and a disquieting Destiny.

The women were just as well cast, with Rachel Kelly a delectable Mirinda; her burnished tone brings Jean Rigby to mind. Joelle Harvey and Susanna Hurrell, as Sicle / Lady Luck and Erisbe / Music respectively, were both making ROH debuts; these are sopranos from whom we will definitely hear much more. Joelle’s rounder, sweeter tone was finely matched to Susanna’s more astringent, silvery sound, and both gave entirely convincing characterizations.

Christian Curnyn directed the Orchestra of the Early Opera Company from the harpsichord, providing an elegant and always supportive framework for the arias and recitatives. The design (Anja Vang Krugh) was simple yet entirely apt, allowing her fabulous, exotic costumes to delight the eye in every scene – it’s no surprise that she began her career with John Galliano.

There are so many treasurable moments that it’s hard to single out just one in order to give a flavour of the production, but the ‘death’ scene, with its elements of Romeo and Juliet stands out: as the lovers ‘die’ the candles are extinguished one by one, the snuffer wielded by the figure of Death – as the pair are re-united, the candles are re-lit by Mirinda, the figure who most represents light and life. Wonderful.

It’s sung in English, in Christopher Cowell’s fast -paced, funny translation, and in this tiny space you can hear every syllable. If you’ve never seen a Cavalli opera, this would be the ideal place to start – it’s also the perfect example of what can be achieved through the combination of years of scholarly research and daring inspiration. The Sam Wanamaker Playhouse is destined to be a major star in London’s already glittering theatrical and musical firmament.