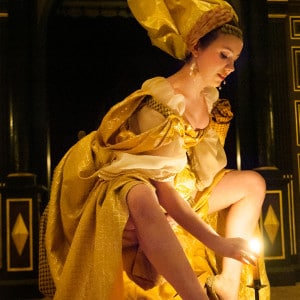 When Cavalli’s L’Ormindo appeared at the Sam Wanamaker Playhouse last March it was the first opera to grace the then newly opened candlelit venue. The production was received exceptionally well, and one could go into this first revival feeling more confident than usual that the magic would be repeated. This is because, with the exception of newcomer Rupert Enticknap who takes over Nerillus for some later performances, the cast is exactly the same as in 2014. Even Christian Curnyn, who has had to miss several recent engagements, is back at the helm of the Orchestra of Early Opera Company, which he directs from the harpsichord.

If anyone has high expectations going in, however, the evening should more than meet them as this joint Royal Opera / Shakespeare’s Globe venture, directed by Kasper Holten and revived by Toria Banks, feels even slicker than before. Opening night last year would have been the first occasion upon which this production had been performed in front of a full audience. Since then the cast have been able to practise working their way through the stalls and leapfrogging the barrier onto the stage twelve times, so it stands to reason that the timing, which was strong from the start, should now be nigh on perfect.

With the playhouse itself creating the infrastructure for the drama, props and scenery are kept to a minimum. The performance is in English, with Christopher Cowell’s translation of Giovanni Faustini’s libretto proving sharp and effective. The choice of language makes the experience feel more immediate, and removes the need for surtitle screens which would surely look ugly in such an exquisite and intimate interior.

The most obvious change comes during the Prologue when Music, instead of heralding the eponymous art form into the venue for the first time, explains that it arrived here a year ago. Besides this, there are a host of embellishments that would seem to have evolved since the production began, as well as touches that only become noticeable on a second viewing. For example, when Ormindo and Amidas strip to their waists in an attempt to prove who has the bigger heart, the joke is partly that they still don their ruffs.

The notion of staging a drama lies at the heart of the evening. The audience enters the playhouse to see the entire cast in dressing gowns as if they are preparing to assume their roles. Then when everyone appears at the end of Act I Ashley Riches still wears his robe because Usman has not yet entered, so he has not yet stepped out of his own skin into that of his character. When Ormindo attempts to woo Erisbe, Amidas utters under his breath “give me strength”, while Lady Luck speaks to the audience to point out that she was responsible for the wind that we see blowing the ship back to Anfa.

The performers frequently interact with the audience, which generates laughs but also feels fitting because many arias present a dilemma that naturally assumes someone is listening to the question being posed. Nevertheless, for all the humour, things are never pushed too far. The scene in which Amidas and Sicle are reconciled is certainly amusing, but the comedy is kept in check so that there is still something highly moving about seeing them rekindle their love.

Similarly, although the tone of the evening is undoubtedly theatrical, there are times when we can genuinely believe in the people that we see before us. The most emotive scene of all is when Ormindo and Erisbe take a potion that they believe will kill them both. As every single candle in the venue is extinguished in turn, leaving the pair to lie in virtual darkness, we really feel as if we are looking at two people whose love has allowed them to go willingly to their deaths.

Susanna Hurrell is a marvellous Erisbe with a sparkling, silvery tone, and excellent enunciation that ensures we hook into what she is singing at every moment. Joélle Harvey as Sicle has a beautifully vibrant voice that proves equally adept at producing pure strains and wispy, spiritual sounds. Samuel Boden and Ed Lyon excel as Ormindo and Amidas respectively. As the pair pursue Erisbe, they bounce off each other both dramatically and musically, with Boden’s light, dreamy voice contrasting well with Lyon’s weightier sound.

As Mirinda, Rachel Kelly has a burnished, mature mezzo-soprano, and her numerous hilarious interactions with the audience benefit from the sense that from the character’s viewpoint they are being played straight. Similarly, James Laing as Nerillus reveals an excellent countertenor, and, to his credit, makes us forget just how sharp the mind must be that goes behind creating such a pathetic, frightened ‘dunce’. It is hard to picture anyone playing Ariadenus to greater effect than Graeme Broadbent, and in Act I he portrays a doddery, grotesque octogenarian while still remaining exceedingly likeable. His sonorous bass is a wonder to hear, but in just a few key lines he takes the time to concentrate on character rather than strict tone.

With Ashley Riches revealing his rich baritone voice to the full as Usman, and Harry Nicoll demonstrating an excellent tenor while still revelling in the dame-like role of Eryka, this is a superb cast all round. By the same token, all of the performers should be here, there and everywhere with countless engagements for the foreseeable future, but, whether in reality it happens or not, it would be nice to think that they took the time once a year to reunite to let this wondrous L’Ormindo live on.